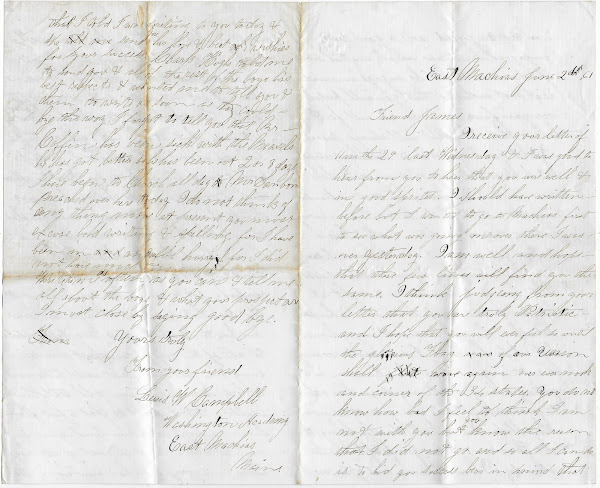 June 2, 1861 letter from Lewis W. Campbell (1841-1926), a student at Washington Academy in East Machias, Maine, to his friend James, serving with the 6th Maine Infantry in the Civil War.
Like untold other Mainers, Lewis would move to Minneapolis and become an influential citizen there.
The letter mentions:
A transcription appears at the end of this post. 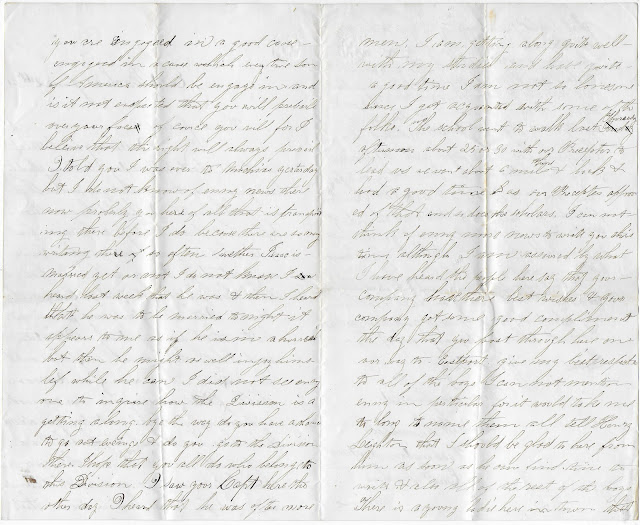 Lewis himself would enlist, on 11 August 1862, into Company B, 11th Regiment, Infantry, as a private and was eventually promoted to sergeant. He was wounded in 1864 at Deep Bottom Run in Virginia, but he survived the war, rising to the rank of 2nd Lieutenant at Appomatox.
See a CDV of Lewis W. Campbell, in uniform, taken about 1864 - on the Maine Memory Network.  Read a letter Campbell wrote in 1864.
Lewis W. Campbell moved to Minneapolis and became a miller and a citizen of note, such that his biography is included on page 267 in A Half Century of Minneapolis, published by Horace Bushnell Hudson in 1908.
From this biography, which includes an engraving of Campbell, we learn that he was born in Harrington, Maine, the son of Dennison Campbell. Lewis' grandfather was a signer to the Constitution of Maine, and his great grandfather a colonel in the 6th Massachusetts during the American Revolution.  Lewis' mother was (Martha Wakefield) Campbell, according to his Minnesota death record. 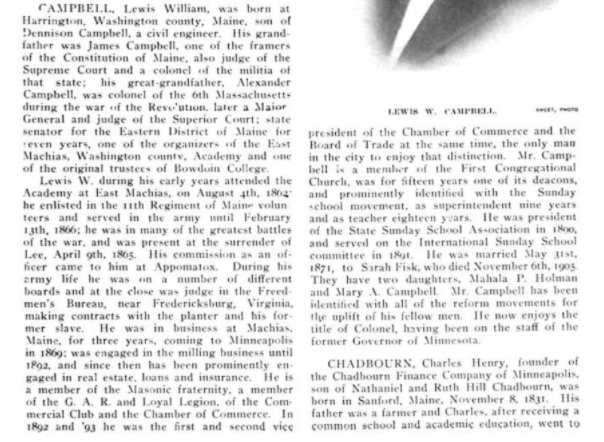 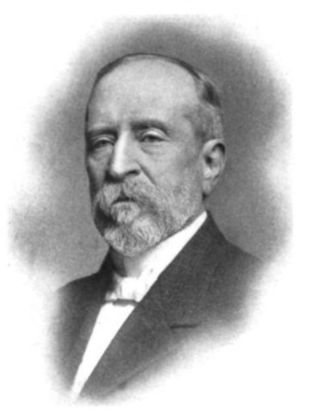 Lewis married New Hampshire native Sarah G. Fisk in Minnesota in 1871. They had at least two children, both daughters.
Transcription
East Machias, June 2d, 61
Friend James
I receive your letter of May the 29 last Wednesday & I was glad to hear from you to hear that you were well & in good spirites. I should have written before but I wanted to go to Machias first to see what was going on over there. I was over yesterday. I am well and hope that these few lines will find you the same. I think judging from your letter that you are truly Patriotic and I hope that you will ever feel so until the glorious Flag of our Union shall wave again over ever nook and corner of the 34 states. You do not know how bad I feel to think I am not with you but you know the reason that I did not go and so all I can do is to bid you success. Bear in mind that you are engaged in a good cause - engaged in a cause which every true Son of America should be engage in and is it not expected that you will prevail over your foes. Of course you will for I believe that the right will always prevail. I told you I was over to Machias yesterday but I do not know of any news there. Now probably you here of all that is transpiring there before I do because there are so many writing there so often. Whether Isaac is married yet or not I do not know. I heard last week that he was & then I heard that he was to be married tonight. It appears to me as if he is in a ____ but then he might as well enjoy himself while he can. I did not see anyone to inquire how the Division is a getting along. Bye the way do you have a chance to go out evenings & do you go to the Division there. I hope that you all do who belong to this Division. I saw your Capt. here the other day. I heard that he was after more men. I am getting along quite well with my studies and have quite a good time. I am not so lonesome since I got acquainted with some of the folks. The School went to walk last Thursday afternoon about 25 or so with our Preceptor to lead us. We we went about 6 miles & back & had a good time as our Precepter approved of that and so does the scholars. I can not think of any more news to write you this time although I am assured by what I have heard the people here say that your company  have there best wishes & your company got some good compliment the day that you past through here on our way to Eastport.  Give my best respects to all of the boys. I can not mention any in particular for it would take me to long to name them all. Tell Henry Leighton that I should be glad to here from him as soon as he can find time to write. & also all of the rest of the boys. There is a young ladie here in town that that I told I was writing to you today & she sends you her love & best wishes for your success. Chark Hughs told me to send you & all the rest of the boys his best respects & wanted me to tell you & them to write as soon as they could. By the way, I forgot to tell you that Mr. Coffin has been sick with the measels. He has got better so he has been out 2 or 3 days. I have been to Church all day. Mr. Sanborn preached over here today. I do not think of any thing more at present. You must excuse bad writing & spelling for I have been in an awful hurry for I did not have much time.
Write to me as often as you can & tell me all about the boys & what your prospects are. I must close by saying good bye.
Yours truly
From your friend
Lewis W. Campbell
Washington Academy
East Machias
Maine
If you have corrections and/or information to share on any of the people mentioned, please leave a comment for the benefit of other researchers.
Posted by Pam Beveridge at 1:41 PM