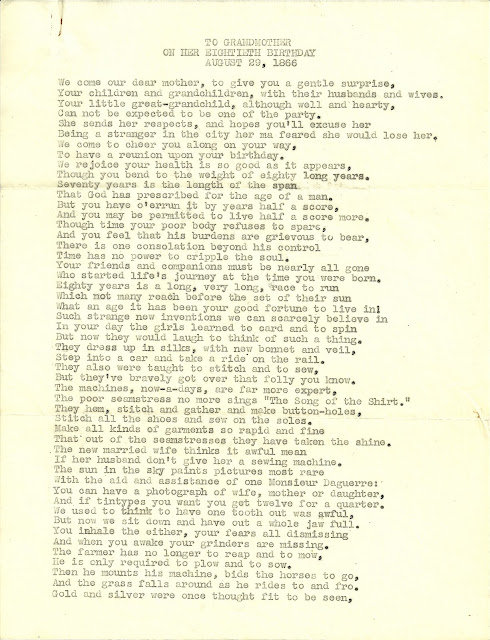 I found this mimeographed copy of an 1866 poem in an envelope postmarked 1950 from a Cambridge, Massachusetts, woman to a couple in Auburn, Maine.   The poem was written by Henry King Lawrence on the occasion of the 80th birthday of his wife's mother, Betsey Kingman Fillebrown (1786-1866). 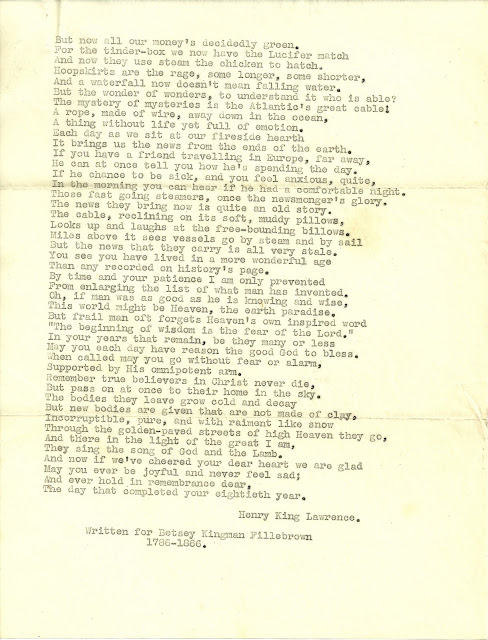 Betsey Kingman, according to [hopefully correct] information I found online, was born in 1786, the daughter of John and Anna (French) Kingman.  She married James Fillebrown, the son of John and Elizabeth (Gould) Fillebrown.  Betsey and James had three children: James, Elizabeth and Frances Louisa.  Daughter Elizabeth  married the poem's author, Henry King Lawrence.


TO GRANDMOTHER
ON HER EIGHTIETH BIRTHDAY
AUGUST 29, 1866


We come our dear mother, to give you a gentle surprise,
Your children and grandchildren with their husbands and wives.
Your little great-grandchild, although well and hearty,
Can not be expected to be one of the party.
She sends her respects, and hopes you'll excuse her
Being a stranger in the city her ma feared she would lose her.
We come to cheer you along on your way,
To have a reunion upon your birthday.
We rejoice your health is so good as it appears,
Though you bend to the weight of eighty long years.
Seventy years is the length of the span
That God has prescribed for the age of a man.
But you have o'errun it by years half a score,
And you may be permitted to live half a score more.
Though time your poor body refuses to spare,
And you feel that his burdens are grievous to bear,
There is one consolation beyond his control
Time has no power to cripple the soul.
Your friends and companions must be nearly all gone
Who started life's journey at the time you were born.
Eighty years is a long, very long, race to run
Which not many reach before the set of their sun
What an age it has been your good fortune to live in!
Such strange new inventions we can scarcely believe in!
In your day the girls learned to card and to spin
But now they would laugh to think of such a thing.
They dress up in silks, with new bonnets and veil,
Step into a car and take a ride on the rail.
They also were taught to stitch and to sew,
But they've bravely got over that folly you know.
The machines, now-a-days, are far more expert,
The poor seamstress no more sings "The Song of the Shirt".
They hem, stitch and gather and make button-holes,
Stitch all the shoes and sew on the soles.
Make all kinds of garments so rapid and fine
That out of the seamstresses they have taken the shine.
The new married wife thinks it awful mean
If her husband don't give her a sewing machine.
The sun in the sky paints pictures most rare
With the aid and assistance of one Monsieur Daguerre;
You can have a photograph of wife, mother or daughter,
And if tintypes you want you get twelve for a quarter.
We used to think to have one tooth out was awful,
But now we sit down and have out a whole jaw full.
You inhale the ether, your fears all dismissing
And when you awake your grinders are missing.
The farmer has no longer to reap and to mow,
He is only required to plow and to sow.
Then he mounts his machine, bids the horses to go,
And the grass falls around as he rides to and fro.
Gold and silver were once thought fit to be seen,
But now all our money's decidedly green.
For the tinder-box we now have the Lucifer match
And now they use steam the chicken to hatch.
Hoopskirts are the rage, some longer, some shorter,
And a waterfall now doesn't mean falling water.
But the wonder of wonders, to understand it who is able?
The mystery of mysteries is the Atlantic's great cable!
A rope, made of wire, away down in the ocean,
A thing without life yet full of emotion.
Each day as we sit at our fireside hearth
It brings us the news from the ends of the earth.
If you have a friend travelling in Europe, far away,
He can at once tell you now he's spending the day.
If he chance to be sick, and you feel anxious, quite,
In the morning you can hear if he had a comfortable night.
Those fast going steamers, once the newsmonger's glory.
The news they bring now is quite an old story.
The cable, reclining on its soft, muddy pillows,
Looks up and laughs at the free-bounding billows.
Miles above it sees vessels go by steam and by sail
But the news that they carry is all very stale.
You see you have lived in a more wonderful age
Than any recorded on history's page.
By time and your patience I am only prevented
From enlarging the list of what man has invented.
Oh, if man was as good as he is knowing and wise,
This world might be Heaven, the earth paradise.
But frail man oft forgets Heaven's own inspired word
"The beginning of wisdom is the fear of the Lord."
In your years that remain, be they many or less
May you each day have reason the good God to bless.
When called may you go without fear or alarm,
Supported by His omnipotent arm.
Remember true believers in Christ never die,
But pass on at once to their home in the sky.
The bodies they leave grow cold and decay
But new bodies are given that are not made of clay.
Incorruptible, pure, and with raiment like snow,
Through the golden-paved streets of high Heaven they go,
And there in the light of the great I am,
They sing the song of God and the Lamb.
And now if we've cheered your dear heart we are glad
May you ever be joyful and never feel sad;
And ever hold in remembrance dear,
The day that completed your eightieth year.


I found some references online to a later death date than 1866 for Betsey (Kingman) Fillebrown.  I'm not sure if she actually died in 1866, as this poem seems to indicate, or if the author was showing the range of her life at her 80th birthday.


Hopefully you will find this poem not only charming, but personally meaningful as well.  Thanks for stopping by!

Posted by Pam Beveridge at 2:10 PM