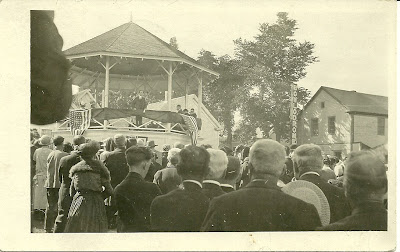 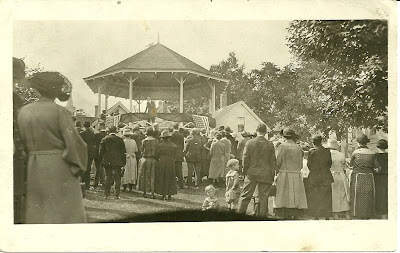 Two postcards showing what appear to be patriotic gatherings at the band stand in Eastport, Maine.

The postcards are from the same person, Edward Lowe, who I believe is George Edward Lowe of Eastport,  who was apparently working and living in Calais, Maine, about 25 miles away, at the time the cards were sent.  Both are addressed to Miss Margaret Henderson of Eastport, Maine, and they both convey the message that he will be visiting Sunday at 2:30 PM. 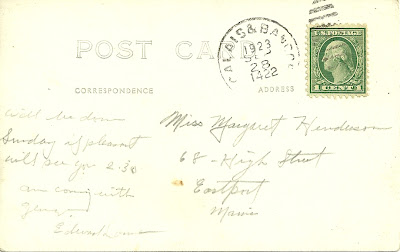 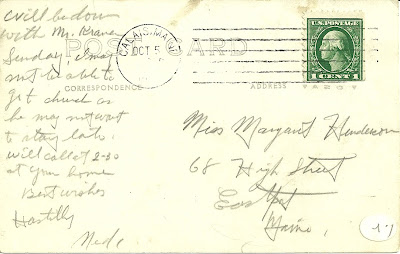 I checked the Maine Marriages Online Database and didn't see a marriage between George Edward Lowe and Margaret Henderson.  Perhaps they were simply friends, or drifted apart or married out of state, to each other or to someone else.  I did see a marriage between a Margaret Henderson of Eastport and Pearson R. Brown in Eastport in 1942, though it might be a different Margaret.

Margaret Henderson was born in September 1897, the daughter of Benjamin and Annie Henderson of Pembroke, Maine and Eastport, Maine.  Benjamin Henderson, born in 1871 in Maine, was the son of Ezra Henderson, born about 1840 in Maine.   It's possible that Ezra was the son of Benjamin  and Mary (Hitchings) Henderson of St. George, New Brunswick, Canada, and Cooper, Maine, but more research needs to be done.  I have no information on Margaret's mother Annie at present.

George Edward Lowe was born in Maine in 1894, the son of William and Mary Lowe of Eastport, Maine.   I believe this is a photograph of Edward Lowe, assuming he is the Edward Lowe with the nickname Buster.  http://downeastmainegenealogy.ning.com/photo/edward-buster-lowe/next?context=user

I don't have further information on Edward's parents William or Mary.  Hopefully one of you will contact me to fill in the blanks.

George Edward Lowe had two siblings, a sister Carrie and a brother Albert.  According to the Maine Marriages Database, Carrie Lowe married Frank R. Wilson of Waterbury, Connecticut in 1920.

I don't see an entry for Albert Lowe; he may have married out of state or in Canada, but I believe this is a photograph of him, his wife and daughter, assuming he is the Albert Lowe who had the nickname Huggie.  http://downeastmainegenealogy.ning.com/photo/albert-huggie-shirley-janet

Found with the same photographs was a photograph of someone identified as Huggie's father, so it's possibly a photograph of the William Lowe we are researching.  He's the man at extreme right.  http://downeastmainegenealogy.ning.com/photo/huggies-father

If you have some information to add to the genealogy of the Henderson or Lowe families, I would most appreciate hearing from you.