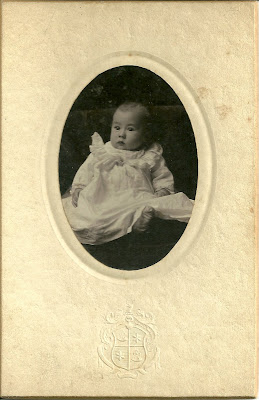 Photograph of Leverett Ernest Carter at five months of age; he was born 14 May 1905 in Connecticut, the son of Erwin Earnest and Elsada Carter.  His father spelled his middle name as Earnest on his World War I Draft Registration Card.  It's possible that Leverett's middle name was Earnest, too, but I haven't verified that. 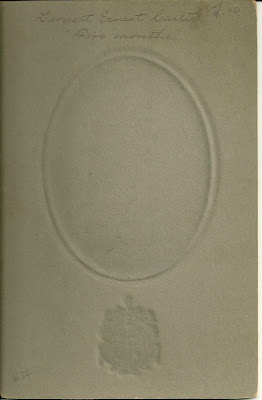 Erwin Earnest Carter was born in October 1874, the son of Charles Edgar and Julia Jerusha (Stannard) Carter.  I've been unable so far to determine the parents of Erwin's wife Elsada or her maiden name.


From research online, it appears that Leverett Ernest Carter graduated from Wesleyan University in Connecticut.  After graduation, he made his life in Michigan.  In the 1930 Census, he was living in Detroit and working as a teacher.  He wrote "Connecticut Shorelines" and "In a Family Way: Artifacts and Primitives and Half Told Tales".


Whether he married and raised a family, I do not know.  He died in Michigan in 1988.


Hopefully a reader will recognize this family and share some insights.    Thanks for stopping by!

Posted by Pam Beveridge at 6:22 PM