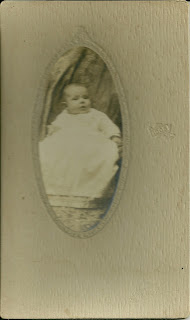 Baby photograph of Philip Henry Pike, born in September 1910 in Maine; died in Massachustts in 2005. 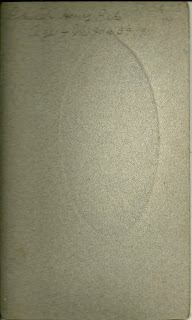 Philip Henry Pike was the son of Henry L. Pike and his wife Ethel M. Comstock.  His parents spent their lives in Kennebec County, Maine, in Manchester and Winthrop, according to Census enumerations.

Philip at some point moved to Massachusetts.  If he married, he probably didn't marry in Maine, as I don't see his name on the Maine Marriages Database.  I last see him in the 1920 Census in Maine and then lose track of him until the Social Security lists him in 2005.

I believe Henry L. Pike was the son of Cyrus Paige Pike and his wife Jane T. of Vermont.  And although I see some discrepancies online, I believe that Ethel was the daughter of Adin B. Comstock and his wife Charlotte; they also lived in Kennebec County, in the town of Vienna, Maine.

Hopefully you will find this photograph meaningful.  If you have any insights to shed on the lives of Philip Henry Pike, his ancestors or his possible wife and children, please let me know.  Thanks for stopping by!