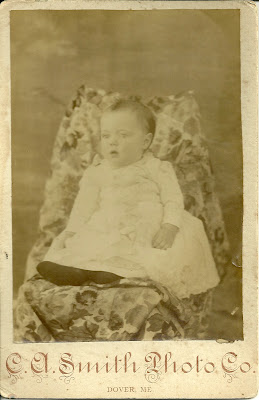 1891 or 1892 photograph of a beautiful baby, unidentified, but with clues on the reverse.  The photograph was taken by C. A. Smith Photo Co., Dover, Maine. 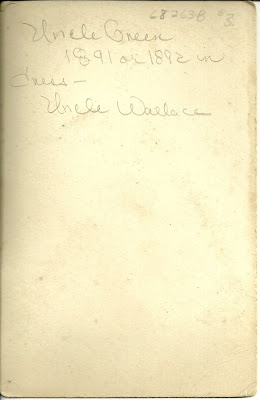 Just for grins and giggles, I searched online for a man with the first name "Green" in the Dover or Piscataquis County area of Maine.  My intention was then to find a connection between a man named Green and a man named Wallace.


Adding to the mystery, Uncle Green might be a paternal uncle and Uncle Wallace a maternal uncle, or vice versa; one or both might never have lived in Piscataquis County, let alone Maine; even worse, Green and Wallace might be last names.
I also searched in the Censuses, on a whim, for a child named Robinson born about 1891 in the Dover, Maine area, and found Melissa Flora, born in Feburary 1891, the daughter of Austin and Eliza (Atkinson; though this is perhaps not her birth surname) Robinson.  My next step is to research Melissa, to see if she might have had an Uncle Green and an Uncle Wallace.  I could find nothing on Eliza Atkinson, other than her marriage to Austin.  The child in the photograph may not have been born a Robinson at all, so this line of research may be a wild goose chase.
In the meantime, perhaps you can easily solve this mystery for me.  If you have in your family an Uncle Green and an Uncle Wallace born in probably the latter half of the 19th century, possibly in Piscataquis County, Maine, I would very much appreciate hearing from you!  Maybe you recognize this baby from your family albums.
Hopefully this photograph holds some significance for you.  Thanks for stopping by!
Email: Heirlooms.Reunited@gmail.com
Twitter ID: ToddHouse
Google Buzz: ToddHouse Genealogy
Downeast Maine & Maritime Canada Genealogy