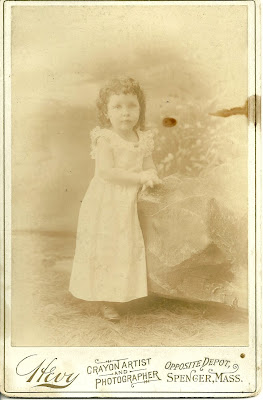 Cabinet photograph of Edith B. Hill, at age two and a half; taken by Hevy, Crayon Artist and Photographer, Spencer, Massachusetts.

I found an Edith B. Hill born November 1880 in the 1900 Census for Worcester, Massachusetts, not far from Spencer.  She's living with her mother Sophia and older sister Julia.  Sophia indicated that she was widowed.

I'm assuming that Henry W. Hill was the father of Edith B. Hill, as he was still living when the 1880 Census was enumerated in June of 1880; Edith, as I noted, was born in November of 1880.  Henry apparently died sometime during the long span between 1880 and 1900 Censuses.

If you have insight into the Hill family, or if you think that the Edith B. Hill in the photograph is from another family entirely, I would most appreciate hearing from you.