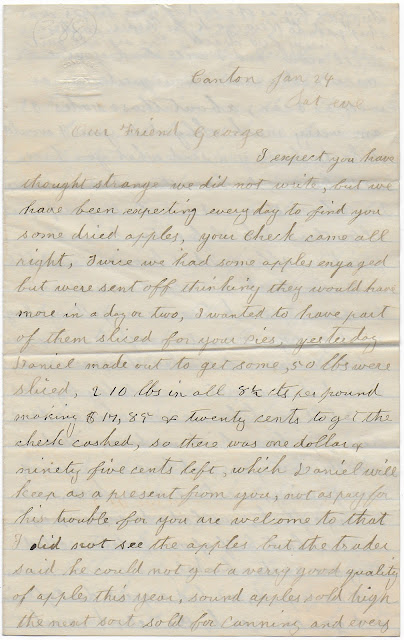 January 24, 1891 letter from Philindia F. (Lombard) Bisbee (1826-1904), wife of Daniel Bisbee (1826-1904), to George R. Henderson at Paullina, Iowa.  It was presumably George who wrote on the last page: Answered this Feb 2/91
Content:
A partially edited transcription and information on people mentioned appear at the end of this post. 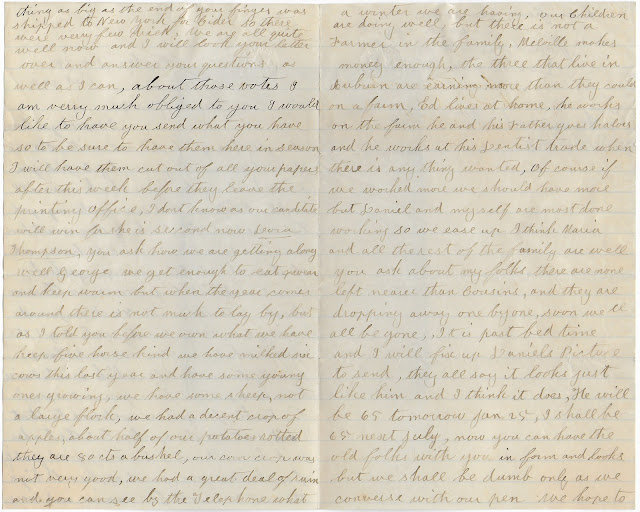 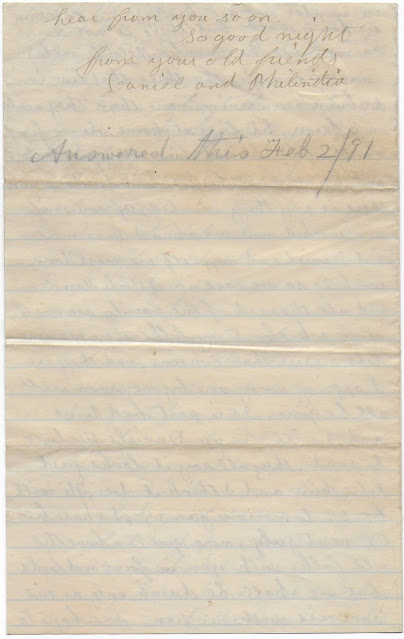 Partially Edited Transcription
Canton Jan 24 Sat eve
Our Friend George
I expect you have thought strange we did not write, but we have been expecting every day to find you some dried apples. Your check came all right. Twice we had some apples engaged but were sent off thinking they would have more in a day or two. I wanted to have part of them sliced for your pies. Yesterday Daniel made out to get some, 50 lbs were sliced, 210 lbs in all, 8-1/2 cts per pound, making $17.85 & twenty cents to get the check cashed, so there was one dollar ninety five cents left, which Daniel will keep as a present from you, not as pay for his trouble for you are welcome to that. I did not see the apples but the trader said he could not get a very good quality of apples this year. Sound apples sold high, the next sort sold for canning and every thing as big as the end of your finger was shipped to New York for bider [bidder ?] so there were few dried.
We are all quite well now and I will look your letter over and answer your questions as well as I can. About those votes, I am very much obliged to you. I would like to have you send what you have so to be sure to have them here in season. I will have them cut out of all your papers after this week before they leave the printing office. I don't know as our candidate will win for she is second now. Dora Thompson. You ask how we are getting along. Well, George, we get enough to eat & wear and keep warm but when the year comes around there is not much to lay by, but as I told you before we own what we have, keep five horse; kind we have milked six cows this last year and have some young ones growing, we have some sheep, not a large flock; we had a decent crop of apples, about half our potatoes rotted, they are 80 cts a bushel, our corn crop was not very good, we had a great deal of rain and you can see by the Telephone what a winter we are having. Our children are doing well, but there is not a Farmer in the family. Melville makes money enough. The three that live in Auburn are earning more than they could on a farm. Ed lives at home, he works on the farm, he and his Father goes halves and he works at his Dentist trade when there is anything wanted. Of course, if we worked more we should have more but Daniel and myself are most done working so we ease up. I think Maria and all the rest of the family are well. You ask about my folks, there are none left nearer than Cousins, and they are dropping away one by one, soon we'll all be gone. It is past bed time and I will fix up Daniel's picture to send, they all say it looks just like him and I think it does. He will be 65 tomorrow Jan 25, I shall be 65 next July. Now you can have the old folks with you in form and looks but we shall be dumb only as we converse with our pen. We hope to hear from you soon.
So good night from your old friends,
Daniel and Philindia.
[in writing of George, presumably] Answered this Feb 2/91

If you have corrections and/or information to share on any of these people, please leave a comment or contact m directly.
Posted by Pam Beveridge at 10:52 AM