1847 Letter from Hannibal Ingalls at Mercer, Maine, to James Holland at Canton, Maine; re: Potatoes 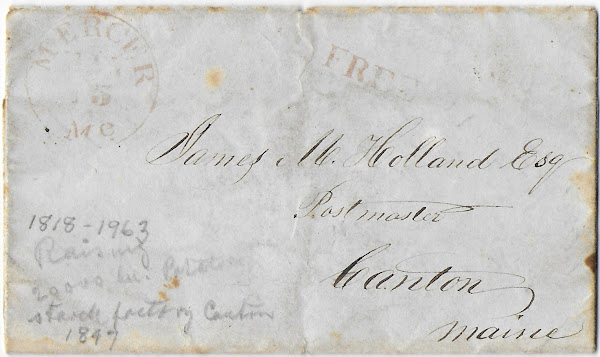 May 15, 1847 letter sent by Hannibal Ingalls at Mercer, Maine, to James M. Holland, Esq., Postmaster, Canton, Maine, regarding the acreage in potatoes he would like to contract for the Boston starch firm Mixer & Pitman.
See a list of the people mentioned, at the end of this post. 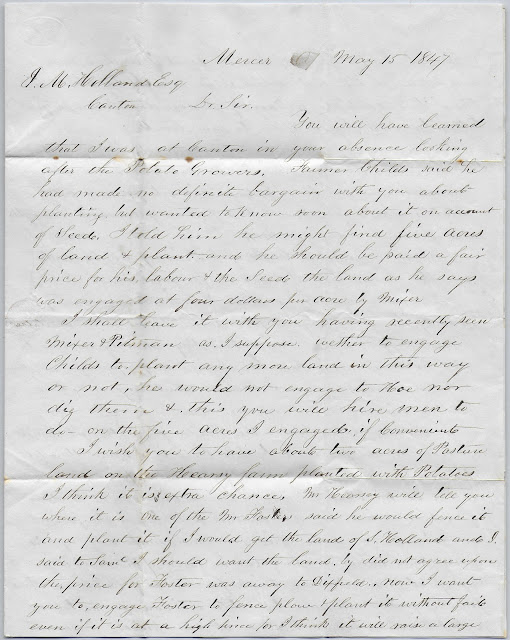 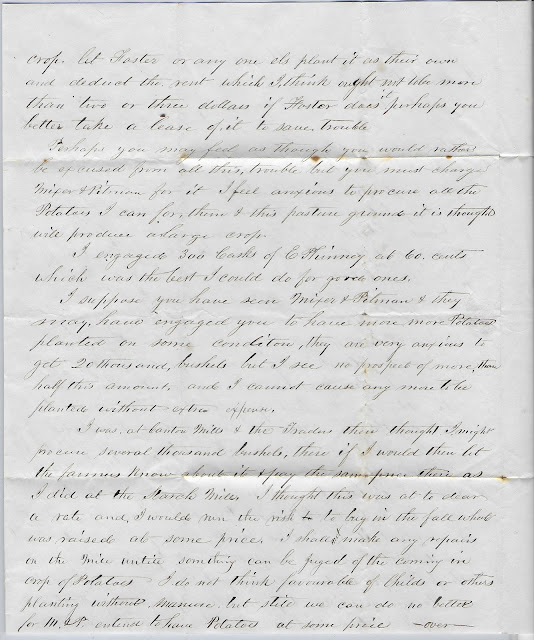 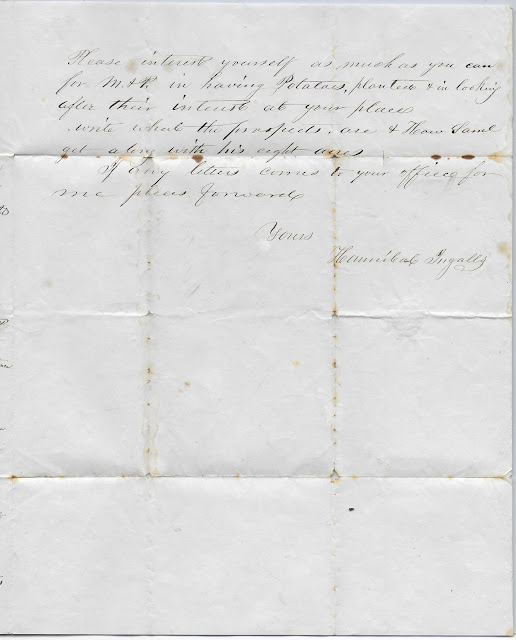 Loose transcription - corrections welcome!
Mercer, May 15, 1847
J. M. Holland, Esq.
Canton
Dr Sir.
You will have learned that I was at Canton in  your absence looking after the Potato Growers. Farmer Childs said he had made no definite bargain with you about planting but wanted to know soon about it on account of Seed. I told him he might find five acres of land & plant and he should be paid a fair price for his labour & the Seeds. The land as he says was engaged at four dollars per acre by Mixer.
I shall leave it with you having recently seen Mixer & Pitman as I suppose whether to engage Childs to plant any more land in this way or not, he would not engage to Hoe nor dig them & this you will hire men to do - on the five acres I engaged, if convenient.
I wish you to have about two acres of Pasture land on the Hearsy [Hearsey] farm planted with Potatoes. I think it is extra chance, Mr. Hearsey will tell you where it is. One of the Mr. Fosters said he would fence it and plant it if I would get the land of S. Holland and I said to Samuel I should want the land by did not agree upon the price for Foster was away to Dixfield. Now I want you to engage Foster to fence, plow & plant it without fail even if it is at a high price for I think it will raise a large crop. Let Foster or any one else plant it as their own and deduct the rent which I think ought not to be more than two or three dollars if Foster does it; perhaps you better take a lease of it to save trouble.
Perhaps you may feel as though you would rather be excused from all this trouble but you must charge Mixer & Pitman for it. I feel anxious to procure all the Potatoes I can for them & this pasture ground it is thought will produce a large crop.
I engaged 300 Casks of E. Phinney at 60 cents which was the best I could do for good ones.
I suppose you have seen Mixer & Pitman & they may have engaged you to have more more Potatoes planted on some condition, they are very anxious to get 20 thousand bushels but I see no prospect of more than half this amount, and I cannot cause any more to be planted without extra expense.
I was at Canton Mills & the Trader there thought I might procure several thousand bushels, there, if I would then let the farmers know about it & pay the same price there as I did at the Starch Mill. I thought this was at too dear a rate and I would run the risk to buy in the fall what was raised at some price. I shall not make any repairs on the Mill until something can be ___  [judged ?] of the coming in crop of Potatoes. I do not think favourable of Childs or others planting without manure but still we can do no better for M&P intend to have Potatoes at some price. - over -
Please interest yourself as much as you can for M&P in having Potatoes, planted & in looking after their interest at your place.
Write what the prospects are & How Saml get along with his eight acres.
If any letters comes to your office for me please forward.
Yours
Hannibal Ingalls
People Mentioned:
If you have corrections to any of the information and transcription above, or information to share on any of the people mentioned, please leave a comment or contact me directly.