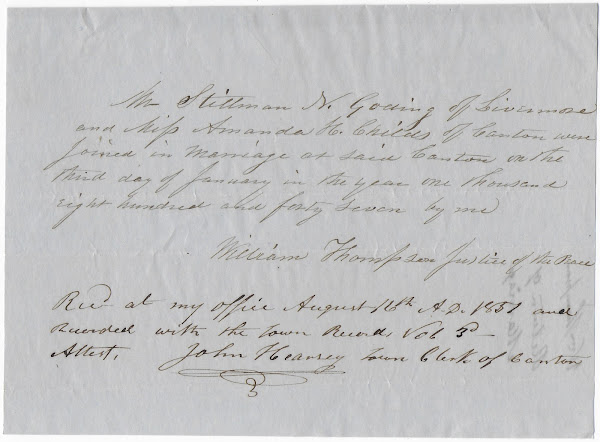 August 16, 1851 Canton, Maine, Return of Marriage document attesting to an 1847 marriage, in the handwriting of William Thompson, Justice of the Peace who had performed the marriage, and of John Hearsey, Town Clerk of Canton, who recorded it.
"Mr. Stillman N. Goding of Livermore and Miss Amanda H. Childs of Canton were joined in marriage at said Canton on the third day of January in the year one thousand eight hundred and forty seven by me.
William Thompson, Justice of the Peace"
"Recd at my office August 16, 1851 and recorded with the Town Record Vol. 3d Attest - John Hearsey, Town Clerk of Canton"
Click here for more 19th century documents and correspondence related to Canton, Maine.
Paper scrap; minimal handwriting on the reverse. 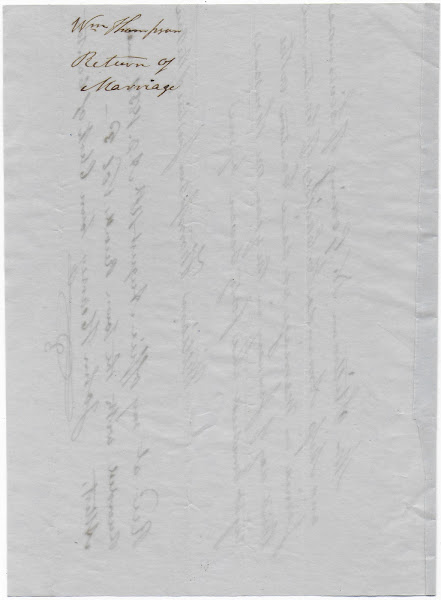 The people mentioned above were presumably:
If you have corrections and/or information to share on any of these people, please leave a comment or contact me directly.
Posted by Pam Beveridge at 4:42 AM