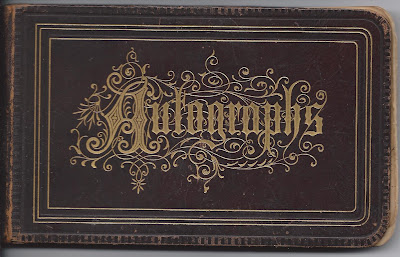 1870s/1880s autograph album of Alice F. Robinson of Kennebunkport, Maine, and Lawrence, Massachusetts.  A slideshow of images of the entire album, in page order, appears at the end of this post. 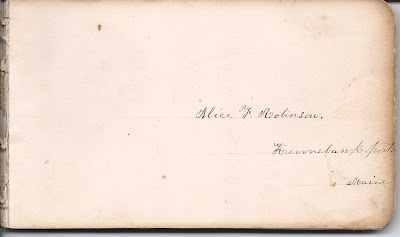 The album is approximately 6-3/4" x 4-1/2" and contains 76 autographs of relatives, friends and teachers, as well as two wonderful illustrations, one of a painted arctic scene and the other of a very cute rendition of a cat's predicament. 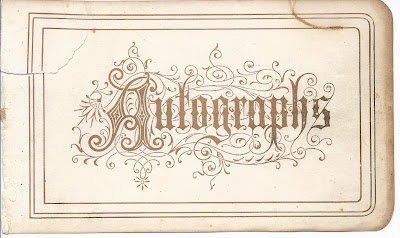 Alice was married at Lawrence, Massachusetts on 23 December 1892, to Charles William Malonzo, born about 1868 in New Hampshire.

Among the many autographs in the album are those of Alice's father, brother, sisters, cousins and her future husband.

Alice's father Charles E. Robinson signed in 1886 when the family was living at Lawrence, Massachusetts:


Alice's future husband Charles W. Malonzo signed in 1891 on a page shared with three others. 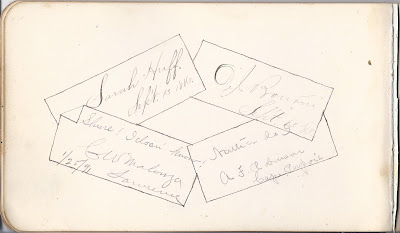 
Cousin George Gooch, whose middle initial I'm not quite sure of, signed in 1878:


Two other people named Gooch signed pages in the album.

Samuel H. Gooch of Kennebunkport, Maine, signed a page in 1878:


Other Sargents who signed were C. H. Sargent, C. R. Sargent and Sam E. Sargent; the latter two gave their address as Newburyport, Massachusetts.  They signed in 1878 and 1879.

Well known evangelist A. P. Graves and his wife signed individual pages in 1881:

Henry M. Hutchins signed a page at Kennebunkport, Maine, in 1881.


I assume Henry M. Hutchins painted this northern scene, which is on the facing page to his page above.


Margaret J. Thompson and her wonderful comic drawing of 1883:


Complete list of signers, in alphabetical order.  Please note that people who indicated towns may have been referring to the town where they signed a page in the Alice's album, rather than their actual home town.

If you have any information on any of the people mentioned above, please leave a comment or contact me directly.

Posted by Pam Beveridge at 1:05 PM