Creative Caption Challenge! Finally, a Use for those UnIDed Photos 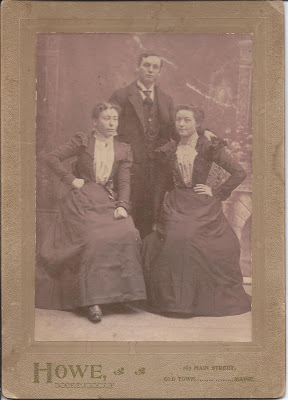 This photograph with an unusual identification on reverse has given me an idea... see below...


Late 1800s photograph, taken by the Howe studio of 167 Main Street, Old Town, Maine, of three people who appear to be siblings.

The reverse has an identification, but it isn't quite what one would expect.  Finally, someone has found a use for unidentified photographs!


Clarence, best remembered for his invention of the sheep-dip tank, died an untimely death when he was trampled to death by a flock of sheep led by his sister, Bertha.  Bertha immediately expanded the business by starting the Crunt Funeral Home and Sheep Dip Emporium.  Bertha ran off several years later with a button hook salesman leaving Fustatia to live on a shoestring and thus tying up the family fortune.  Wrought with grief, Fustatia threw herself into one of Clarence's sheep dip tanks, proving that once Crunt, always a Crunt.

In the vein of the Genealogy Poetry Challenge that Bill West administers, here are the guidelines for the Creative Caption Challenge:

1)  Find a photo, identified or unidentified, in your collection or online and create a caption for it, from the ridiculous to the sublime

2)  Photographs can be of people, singly or in groups; animals; vistas; whatever you find that speaks to you

3)  If the photograph is identified, don't name the people or show the ID.

5)  Entries, consisting of a link to your blog post, must be posted to the comments section of this blog post, by May 1, 2012 to be eligible for a prize.

7)  Prize - I'm thinking - maybe some Maine Maple Syrup mailed to you??  Don't get excited about a certain crustacean, though I would spring for 2 lobster rolls from Quoddy Lobster (sheer heaven)  if you foot the bill for yourself and a companion to get there.

Fire up those creative juices!!