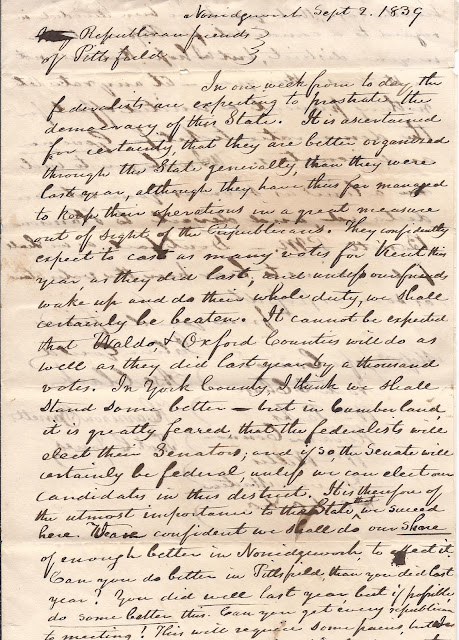 1839 letter from several Republicans from Norridgewock, Maine, addressed to their fellow Republicans at  Pittsfield, Maine, urging them to get out the vote. 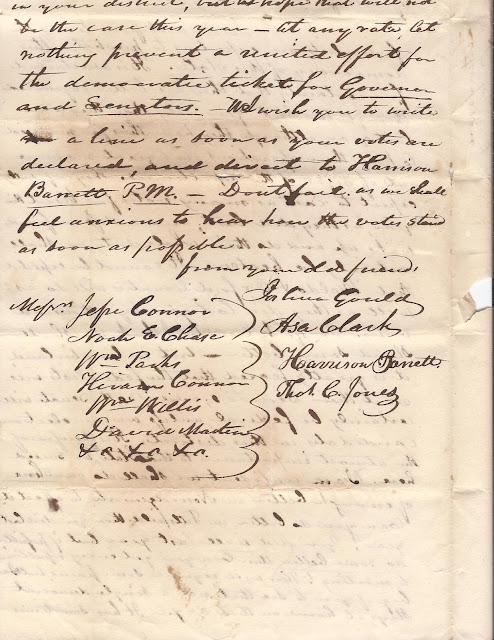 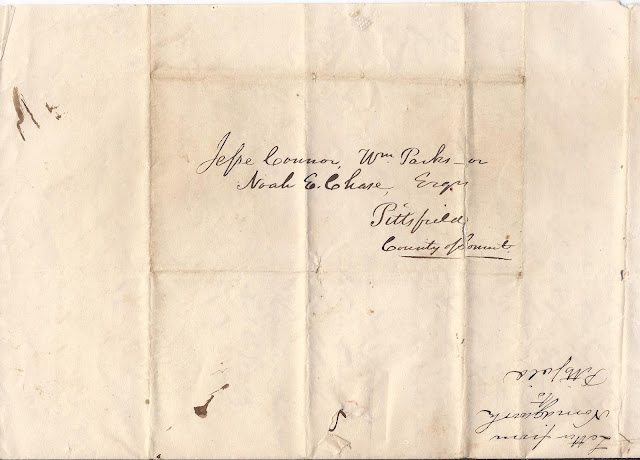 In one week from today the federalists are expecting to prostrate the democracy of this State.  It is ascertained for certainty, that they are better organized through this State generally than they were last year, although they have thus far managed to keep their operations in a great measure out of sight of the Republicans.  They confidently expect to cast as many votes for Kent this year, as they did last, and unless our friends wake up and do their whole duty, we shall certainly be beaten.   It cannot be expected that Waldo and Oxford Counties will do as well as they did last year by a thousand votes.  In York County, I think, we shall stand some better - but in Cumberland it is greatly feared that the federalists will elect their Senators, and if so, the Senate will certainly be federal, unless we can elect our candidates in this district.  It is therefore of the utmost importance to this State that we succeed here.  We are confidant we shall do our Share of enough better in Norridgewock, to affect it.  Can you do better in Pittsfield than you did last year?  You did well last year but if possible, do some better this.  Can you get every republican to meeting?  This will require some pains, but I beg of you to see that not a single democrat stays at home on that day.  It has sometimes been the case, that you have been divided in regard to a candidate for Representative in your district but I hope that will not be the case this year.  At any rate, let nothing prevent a united effort for the democratic ticket for Governor and Senators.  We wish you to write a line as soon as your votes are declared, and direct to Harrison Barrett, P.M.  Don't fail, as we shall feel anxious to have the votes stand [?] as soon as possible.


It's possible that some of the Norridgewock men did not actually sign the letter, as the handwriting looks fairly uniform.

If you have information on any of the men mentioned here, please leave a comment or contact me directly.

Map showing Norridgewock and Pittsfield, both located in Somerset County, Maine: zoom out one click to see Pittsfield off to the east