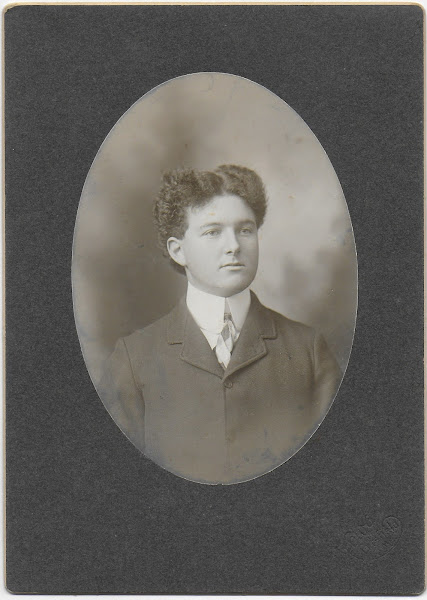 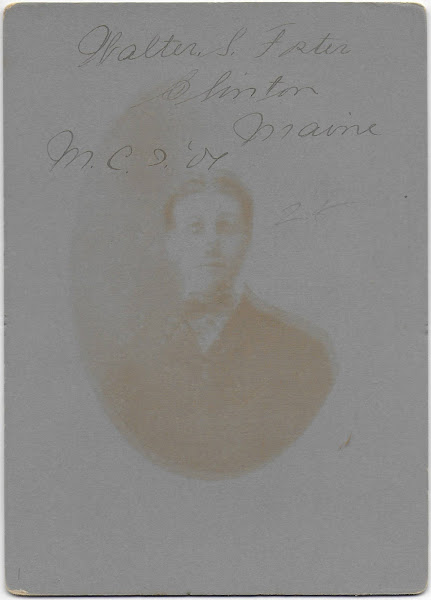 The reverse shows the eerie shadow of another young man, whose image was apparently long stored with this photograph.
Walter Scott Foster (1881-1953) was born 26 March 1881 in Clinton, Maine, son of farmers William Getchell Foster and Lydia Ann (Berry) Foster, natives of Clinton, Maine, and Burnham, Maine, respectively.
On 28 December 1903 in Pittsfield, Maine, Walter married Mattie Agatha Noble (1885-1933), daughter of Riley Noble and Laura Bell (Withee) Noble.
By the time of the 1910 Census, Walter and Mattie had moved to Portland, Oregon, where Walter was working as a bookkeeper. By 1920 they had two children and were living in McGilvra, Washington, where Walter worked as a Claims Agent for American Express. In 1930 the family was enumerated in Canyon, Washington, where Walter worked for Railway Express.
By 1940, Mattie had died, and Walter was living alone in Wenatchee, Washington, still working for Railway Express.  He died in 1953.
If you have information to share on the Foster, Berry and Noble families, please leave a comment for the benefit of other researchers.
Posted by Pam Beveridge at 7:12 AM