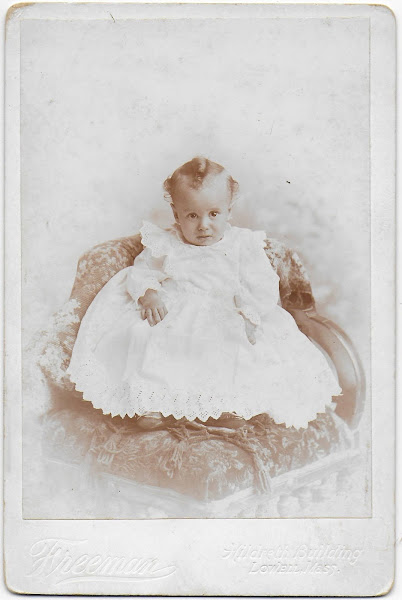 Photograph of a baby identified on the reverse as Cecil Gordon, son of Elisha and Lucy Gordon.
The photograph was taken at the Freeman studio in Lowell, Massachusetts. 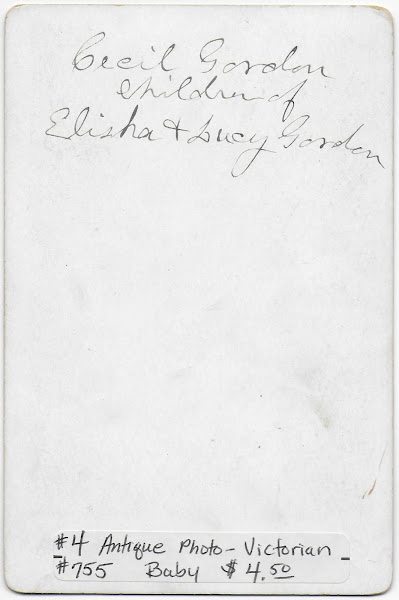 Cecil may have been Cecil O. Gordon (1894-1957), who was born at Thorndike, Maine, on 20 October 1894, son of Elisha Gordon and Catherine Lucinda (Adair) Gordon, who were natives of Thorndike, Maine, and New Brunswick, respectively.
Cecil's middle name is shown differently in the records, from Oswell at his birth to Osmund in a marriage record to Oswald on his FindaGrave memorial.
By the time of the 1900 Census, Cecil and his parents were living in Dracut, Massachusetts, wher Elisha was superintendent of the Town Farm.  By 1910, the family had moved to Lowell, Massachusetts, where Elisha was working as a teamster.
On 31 August 1912, Cecil, whose middle name was shown on the record as Osmond, was married to his first wife, Miss Elsie May Pratt, a New Hampshire native; they were divorced about 1920, after having at least one child, son Oscar Leroy Gordon, who died in Italy in 1943 in World War II.
From 1920 on, Cecil lived in Laconia, New Hampshire.  He was married again in 1925 to Cora May Hawkins (1883-1968), also a native of New Hampshire.
If you have information to share on any of these families, please leave a comment for the benefit of other researchers.
Posted by Pam Beveridge at 7:28 AM