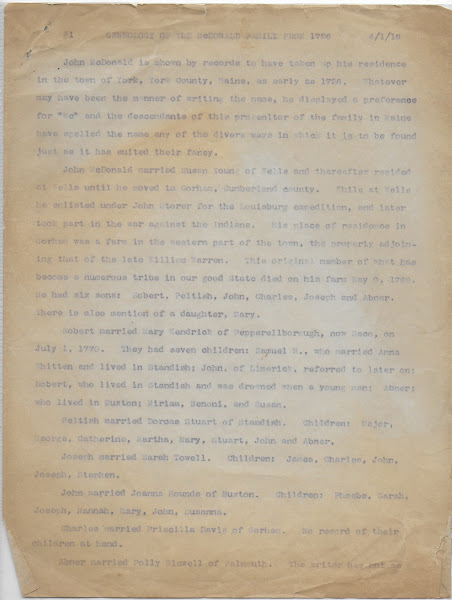 10-page mimeograph copy of the research of an unidentified person into the genealogy of John McDonald and Susan (Young) McDonald, 18th century residents of York County, Maine, and Cumberland County, Maine.
In addition to dates and places, the genealogy contains many anecdotes, to bring these people to life.
"John McDonald is shown by records to have taken up his residence in the town of York, York County, Maine, as early as 1726.  Whatever may have been the manner of writing the name, he displayed a preference for "Mc" and the descendants of this progenitor of the family in Maine have spelled the name any of the diverse ways in which it is to be found just as it has suited their fancy.
John McDonald married Susan Young of Wells and thereafter resided at Wells until he moved to Gorham, Cumberland county. While at Wells he enlisted under John Storer for the Louisburg [sic] expedition, and later took part in the war against the Indians. His place of residence in Gorham was a farm in the western part of the town, the property adjoining that of the late William Warren. This original member of what has become a numerous tribe in our good State died on his farm May 9, 1768. He had six sons: Robert, Peltiah, John, Charles, Joseph and Abner. There is also mention of a daughter, Mary."
The genealogy then continues on through several generations, with the last births recorded being three of the seven children of Judge John McDonald (1800-1867) and wife Olive (Jefferds) McDonald.
A few accomplished men rated a page or more:
An anecdote about Moses McDonald/McDaniel (1814-1869):
"During the interview with the venerable Nathaniel Watson of Limerick...., he with much relish related an incident that happened during the days when Limerick was the shire town of the county. An important land damage case was on trial and Moses McDonald, then but a stripling, was attorney for one of the parties. His youthfulness was taken advantage of by the counsel for the other side in an endeavor to belittle the cause of McDonald's client, it being contended that if the latter had much of a case he would have employed a lawyer of some experience and standing. 'When the boy had his turn', continued Mr. Watson, with his handsome blue eyes sparkling as he recalled the episode, 'he didn't leave the other lawyer a leg to stand on. I tell you he was sorry before he spoke before young McDaniel got through with him. You see, the McDaniels were built this way; the more you bore down on 'em the harder they'd fight.'"
The genealogy ends with a sad anecdote about Colonel Abner McDonald 1808-1842): "Col. Abner S. McDonald, third son of Gen. John McDonald, Accidentally shot by a gun in the hands of a New Orleans volunteer near Corpus Christi, Texas. At the time of his death, he was Chief Justice of the County and Mayor of the town of Victoria, Texas."
To keep everything straight, I made a tree of the people mentioned - of the 63 people, most have the surname McDonald/McDaniel, as would be expected; the rest:
Posted by Pam Beveridge at 12:30 PM