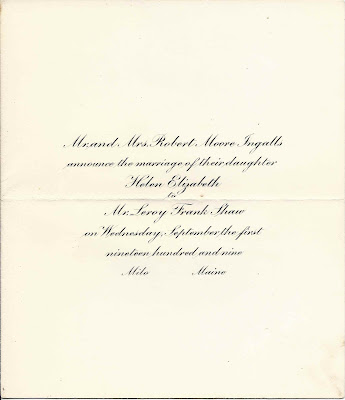 1909 invitation to the wedding of Helen Elizabeth Ingalls and Leroy Frank Shaw at Milo, Maine.

I believe Leroy Francis Shaw was born December 3, 1885 in Maine, the son of Charles E. and Carolyn E. (Avery) Shaw, who were born at Winterport, Maine, and Bucksport, Maine, respectively.  Leroy, according to his marriage record, was working as a bank manager.   Leroy and Helen had at least one child, a son Leroy Frank Shaw, Jr., who went on to graduate from the engineering department of the University of Maine.

I found Leroy Frank Shaw living at Boston, Massachusetts, at the time he filled out his World War I draft registration card.  He gave his mother as his nearest relative, so the couple might have been divorced, or at least separated, by September 12, 1918, the date the form was completed.   It appears that he later fell upon hard times.

If you have corrections or additions to the information above, please leave a comment or contact me directly. Later on, he was at Hartford, Connecticut