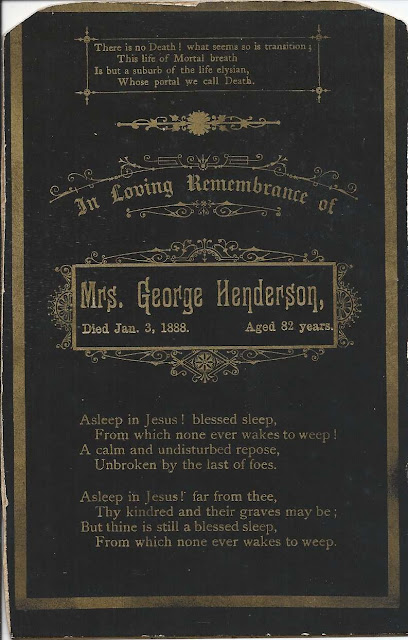 Memorial card printed on the occasion of the death of Mrs. George Henderson, who died January 3, 1888 at age 82.

There was a Catherine (Henderson) Henderson who died on that date.  Catherine "Katie" Henderson was born February 11, 1805 at Washington, Pennsylvania, daughter of Frederick and Margaret Henderson.

On 16 June 1827 [the date taken from George's obituary, which may be in error, as many online sources have 16 June 1825] at Muskingum, Ohio, Catherine married George Henderson, son of Robert and Jane (McGuffy) Henderson.

George and Catherine raised, I believe, eight children at Bristol, Ohio. According to George's obituary, two daughters died in infancy, and two daughters died before him, perhaps in young adulthood. The other four children were alive at the time of George's death at the age of eighty-seven years, seven months and 15 days, on 15 August 1889.

If you have corrections and/or additions to the information above or if you feel that the card refers to a different Mrs. George Henderson, please leave a comment or contact me directly.

Posted by Pam Beveridge at 5:13 AM