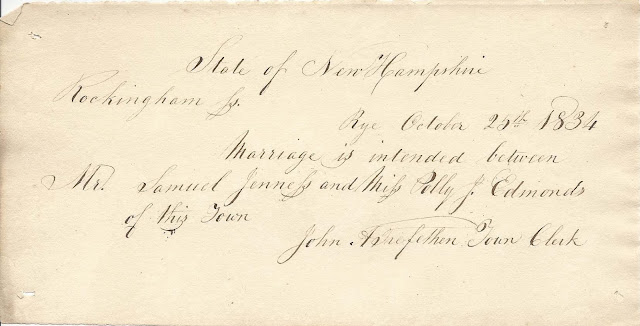 I couldn't find a record of any children born to Samuel and Polly, but there may have been some. Polly died August 17, 1841 at Rye, New Hampshire.

Samuel's third wife, whom he married on February 11, 1844, was Sarah S. Randall, daughter of Jacob and Anna (Shute) Randall. I didn't find a record of any children born to Samuel and Sarah.

If my information is correct, Sarah died March 1, 1875 at Rye, New Hampshire, and Samuel died the next day.

The Town Clerk who handwrote the marriage intention was John Adams Trefethen, who was born July 27, 1799 at Rye, New Hampshire, son of Captain William and Elisabeth (Tucker) Trefethen.

In November 1834, shortly after he signed the marriage intention above, John married Mary Locke, daughter of Joseph and Abigail (Marden) Locke. Mary was born September 25, 1809 at Rye, New Hampshire. They had at least four children and lived their lives, it appears, at Rye, New Hampshire.

In addition to being Town Clerk, John served as a selectman, school teacher and state representative.  He died October 5, 1870; his widow Mary died September 30, 1888.

If you have corrections or additions to the information above, please leave a comment or contact me directly.

Posted by Pam Beveridge at 4:46 PM