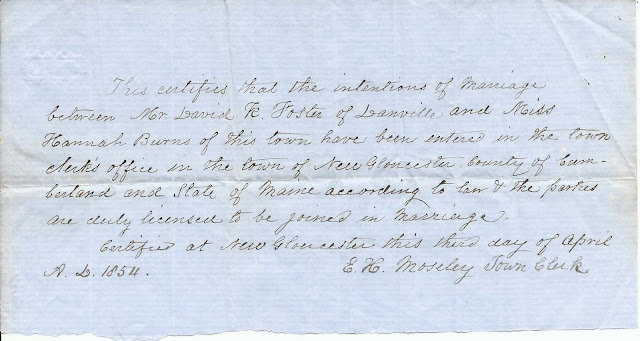 Two 1854 handwritten marriage intentions, one from New Gloucester, Maine, and one from Danville, Maine, both referring to the intention to marry of David K. Foster and Miss Hannah Burns.

This certifies that the intentions of marriage between Mr. David K. Foster of Danville and Miss Hannah Burns of this town have been entered in the town clerk's office in the town of New Gloucester, County of Cumberland and State of Maine according to law and the parties are duly licensed to be joined in marriage.
Certified at New Gloucester this third day of April, A.D., 1854.
E. H. Mosely, Town Clerk 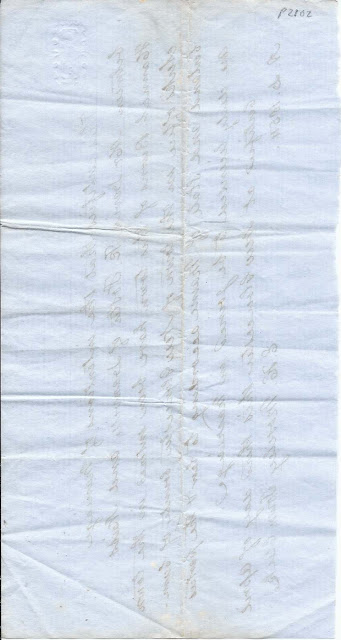 Nothing on reverse except a number written in pencil, which might be meaningful or might simply be a contemporary collector's inventory number.

The second intention was handwritten by C. G. Skinner, Town Clerk of Danville, Maine, on 4 April 1854. 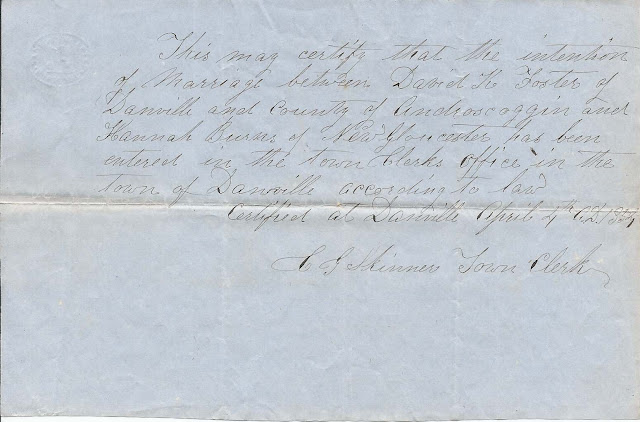 This may certify that the intention of marriage between David K. Foster of Danville, and County of Androscoggin and Hannah Burns of New Gloucester has been entered in the town clerk's office, in the Town of Danville according to law.
Certified at Danville, April 4th, A.D., 1854.
C. G. Skinner, Town Clerk 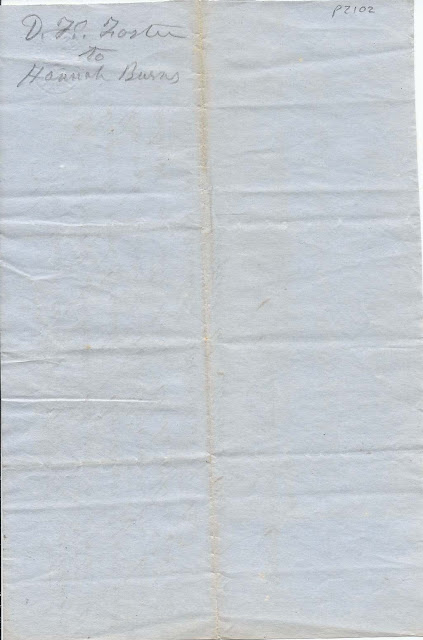 The reverse has the name of D. K. Foster and Hannah Burns and a similar number to the one on the first document.

I found a birth record for a David K. Foster in Maine Births and Christenings 1739-1900, noting that he was born at Danville, Maine, on May 17, 1820.  No parents are shown, at least on the online record. This is at odds with his marriage record, and his daughter's birth record, which show his birthplace as Essex County, Massachusetts. Perhaps a reader will come forward with more information.

It's possible he's the David Foster listed in the 1850 Census of Poland, Maine, with parents Joseph and Susan Foster, each age 60. A woman named Susan, age 80 was living with David and Hannah in the 1870 Census.

Hannah Burns was born at New Gloucester, Maine, on December 1, 1833, the daughter of William and Lovisa B. Burns.  Lovisa or Louise may have been Louise Brooks Davis.

As for the town clerk, Elisha H. Moseley, who was also a postmaster at New Gloucester, he was born about 1813 in Maine, possibly the son of Rev. Elisha and Nancy (Lobdell) Moseley, but I haven't found proof of that.

Elisha H. Moseley married Sophia or Sophronia A. L. Sampson on May 15, 1847 at New Gloucester. They had at least three children, I believe. Elisha died November 11, 1862.

Elisha's possible father, Rev. Elisha Moseley, ministered at New Gloucester, Maine, from 1802 to 1826. He married Nancy Lobdell, daughter of Isaac and Polly (Stetson) Lobdell, on October 27, 1811 at Minot, Maine.  Again, I haven't yet found a record linking the two Elishas; perhaps a reader will step in.

Calvin G. Skinner married Louisa Crockett on February 11, 1844, at Danville, Maine. Louisa was born September 6, 1821 at Danville, Maine, or Pejepscot, Maine, daughter of David and Esther (Dingley) Crockett. Calvin and Louisa raised a family of, I believe, eight children at Danville. Several of their children died young, or fairly young.