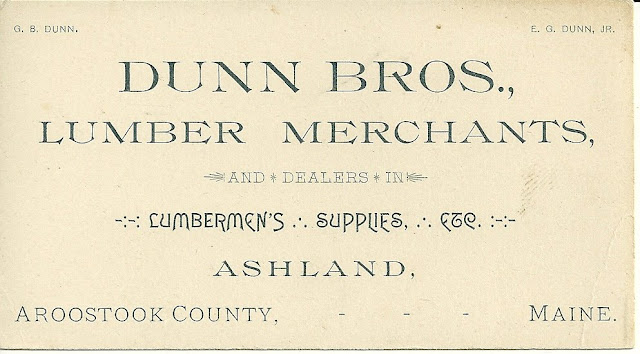 George Bancroft Dunn was born 18 Jun 1849 at Ashland, Maine.  He married Lucinda Rich Cushing, who was born at Frankfort, Maine, in May 1851, the daughter of Andre and Delia (Rich) Cushing.  Their children were:
George Bancroft Dunn rated a few paragraphs in George Thomas Little's Genealogical and Family History of the State of Maine, published in 1909.  He was 80 years of age, living in Houlton, Maine, in the 1930 Census.  I'm not sure of his date of death.

Elbridge Gerry Dunn, Jr. was born in April 1859 in Maine.  He was married twice; his first wife Alice M. Hooper, whom he married in 1893, was dead by the time of the 1900 Census enumeration.  In that Census, he was living in Ashland, Maine, with his two daughters, Marjorie and Mertie, as well as numerous boarders and servant boarders.

One of the servant boarders was Louise May Gerry [enumerated as Gary], who would become his wife in 1903.   Elbridge Gerry Dunn,Jr. died 4 January 1904.   I have no information on the parents of either Alice M. Hooper or Louise May Gerry.

In the 1910 Census of Winchester, Massachusetts, Marjorie and Mertie were living with their father's sister Mary (Dunn) Johnson and her husband Edward J. Johnson.  I lost track of them after that.

If you have any corrections, additions or insights regarding the information presented above, please scroll down to the bottom of this page for the comments box or contact me directly.

Posted by Pam Beveridge at 5:42 PM