Tribute to Lucy Melvill Clark Nourse on occasion of her death; aunt of Herman Melville 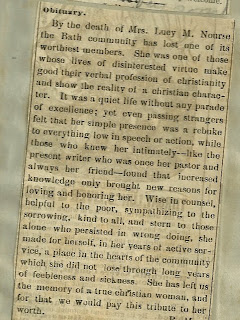 1877 clipping pasted into a scrapbook of Bath, Maine, and Bangor, Maine clippings and ephemera, likely made by the Frank A. Owen or a member of his family.  Frank A. Owen was for many years manager of the Opera House in Bangor.

Lucy Melvill Nourse (1795-1877) was the daughter of Major Thomas Melvill and sister of Alan Melvill, who was the father of author Herman Melville.    She was born in 1795 in Massachusetts and was married to Justin Wright Clark in 1828; he died in 1833.  Lucy later married Amos Nourse, a medical doctor, customs collector and briefly a US Senator upon the resignation of Hannibal Hamlin, later the first Vice President under Abraham Lincoln.   Nourse had previously been married to Clarissa Augusta Chandler, the mother of his children, but she died in 1834 when they were young.


By the death of Mrs. Lucy M. Nourse the Bath community has lost one of its worthiest members.  She was one of those whose lives of disinterested virtue make good their verbal profession of christianity and show the reality of a christian character.  It was a quiet life without any parade of excellence; yet even passing strangers felt that her simple presence was a rebuke to everything low in speech or action, while those who knew her intimately - like the present writer who was once her pastor and always her friend - found that increased knowledge only brought new reasons for loving and honoring her.  Wise in counsel, helpful to the poor, sympathizing to the sorrowing, kind to all, and stern to those alone who persisted in wrong doing, she made for herself, in her years of active service, a place in the hearts of the community which she did not lose through long years of feebleness and sickness.  She has left us the memory of a true christian woman, and for that we would pay this tribute to her worth.
R. M.


Hopefully you have enjoyed this memento from 1877.  Thanks for stopping by!