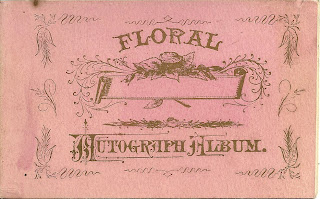 1893 autograph album inscribed "From Herman to Nellie".  Nellie is Nellie M. Lamb, Carthage, Maine.  The autograph album consists of only two interior sheets, and only the page with Nellie's name has writing. 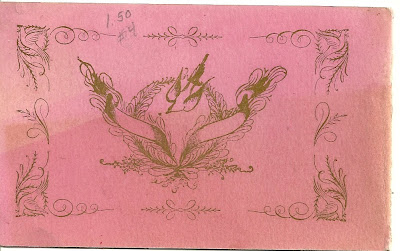 From what I have been able to find online, Nellie Lamb was born in July 1880, the daughter of Clinton Cleates Lamb and his wife Reina Tamar (Daggett) Lamb.  In August 1900 Nellie married Leroy F. Wilbur, the son of Edward and Elsie Wilbur of East Livermore; they were both living in Carthage, Maine at that time, according to the Maine Marriages online database.  It appears that this marriage ended, either by divorce or Leroy's death.

I can't find a reference in the Maine Marriages online database, but it appears that Nellie later married George S. Nute; I haven't been able to find any information on him, other than that he is listed on the 1920 and 1930 Censuses living with Nellie and children, some of them I believe from her first marriage.  In the 1930 Census, George, Nellie and children are living in Roxbury, Maine, with Nellie's widowed mother Tamar.   I found an online reference that Nellie died in Portland in 1936.

Incidentally, Nellie had an older brother Herman, who may be the Herman who gave her the autograph book in 1893.

If you have any information on the Lamb, Daggett, Wilbur or Nute families, I would love to hear from you.

Hopefully you've found this heirloom meaningful.  Thanks for stopping by!

Posted by Pam Beveridge at 3:33 PM