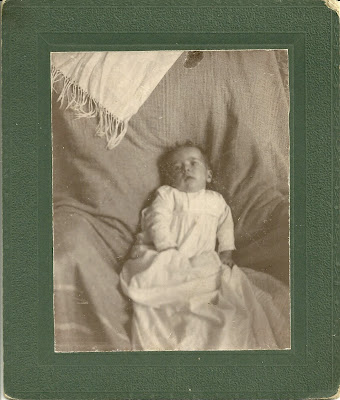 Photograph of a baby identified on reverse as Evelyn Agnes Hill; sadly, no photographer's imprint, which might have given a clue to locale.

I found a reference to an Evelyn Agnes Hill in a program of Bryn Mawr dated 1898/1899; the reference also mentioned Golden Hill Seminary in Bridgeport, Connecticut.  I had initially dated this photograph to about 1900, which would make the Evelyn in the photograph born after the Evelyn in the program.  But it's possible that the photograph may be older. What do you think?  I imagine it's harder to date baby clothing than women's fashions.


I found Evelyn A. Hills living all over the United States but thought I would mention a few from New England, as I purchased the photograph in Maine - though the place of purchase may have nothing to do with the locale of the photograph.


If you have any insight into the Evelyn Agnes Hill in the photograph, please contact me so that I can properly identify her.  Thanks for stopping by!

Posted by Pam Beveridge at 9:31 AM