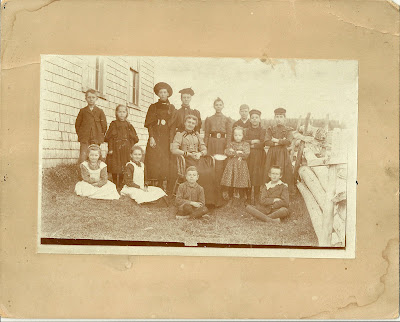 Circa 1890s photograph of students at the Maple Point School in Robbinston, Maine.  Handwriting on reverse mentions "Misses Sadie and Lillian G. Daggett, South Robbinston, Washington County, Maine, P.O. Box 71".  Unfortunately, assuming that these two girls are in the photograph, no positioning is given. 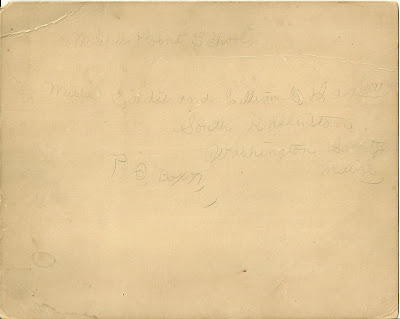 Robbinston is a town near Calais and Eastport, Maine, situated at the mouth of the St. Croix River where it empties into Passamaquoddy Bay, across from the resort town of St. Andrews, New Brunswick, Canada.  During the 19th century, Robbinston was a shipbuilding center.  William Wallace Bates and his father Stephen built ships there or near there before leaving for Wisconsin around the 1850s, where their Maine and Maritime designs revolutionized shipbuilding techniques on the Great Lakes.

From researching online, I determined that Sadie May Daggett (1885-1974) and Lillian Gertrude Daggett (1889-1979) were the daughters of George Albert and Harriet R. (Nodding or Noddin) Daggett.   George Albert Daggett, born in Robbinston in 1850, was the son of Leonard and Susan (Andrews) Daggett.  I found a reference online that Harriet R. Nodding or Noddin was born on Deer Island, in New Brunswick, Canada in 1850, the daughter of George and Eliza (Lord) Nodding or Noddin, but could find no further information on George and Eliza to back this up.  "Lord" is a common surname in Deer Island genealogy.

Please note: The next paragraph was edited on 8/2/10 from the original post of July 23, 2010, thanks to updated information provided by a helpful reader.


Albert Ford Merrill, Sr., was the son of Nathan Libby and Elizabeth (Wiggin) Merrill, New Hampshire natives.  In 1930 they moved to Corinth, Maine, where their seven children, including Albert Jr. were born.  The Merrills were involved in lumbering and mills in the Portsmouth, New Hampshire area and then in Penobscot and Kennebec Counties in Maine.  In the mid 1860s, after some years back in New Hampshire and then in Bangor, Maine, Nathan and Elizabeth Merrill settled in Newport, Maine, where they died in 1887.


Lillian Gertrude Daggett married Earl J. Hancock, son of James and Cora Hancock, of the Waterville, Maine area.  They had at least two children.  In the 1930 Census, Lillian's mother Harriet is shown living with them in Waterville.

If you have any information on the family lines mentioned here, please leave a comment or contact me directly.   Also, if you recognize any of the students in the photograph from your family albums or other research, please contact me so that I can give the photograph its proper due.

Posted by Pam Beveridge at 9:35 AM