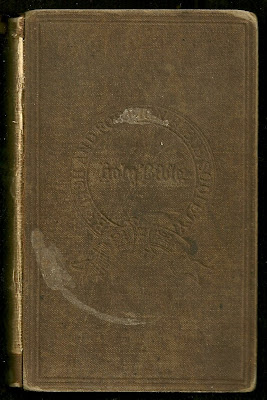 Two antiquarian books, both inscribed to the same person, Carrie Shepherd, one a Holy Bible from her teacher, J. A. Kneeland, and the other "The Adopted Daughter, or the Trials of Sabra, a Tale of Real Life, from her cousin, Mary C. K.  It's a tempting notion that Mary's surname was Kneeland, but it may have been something totally different.


The Holy Bible, shown above, has a publication date of 1880.  It's a small Bible; someone, perhaps Carrie, has written some notes on the back end paper - sadly, nothing to give a clue of her identity.  Here is an image of the inscription page: 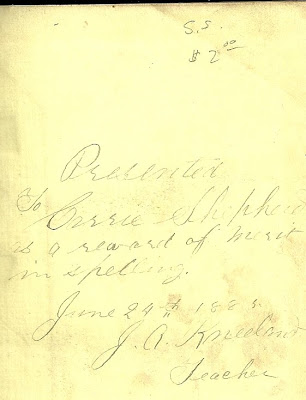 As you can see, the gift was presented to Carrie in June of 1885, at the end of the school year, as a reward of merit for spelling. 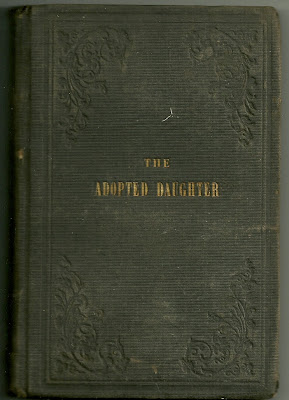 The Adopted Daughter was printed in 1863 (the only date I see) and was perhaps a second hand gift to Carrie, possibly a cherished book from cousin Mary's own library or that of her family.   It was presented to Carrie on her 15th birthday and, unfortunately, the inscription is not dated.  Deducing Carrie's birth date or year would have been a plus. 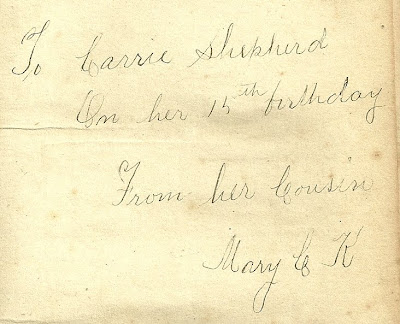 
Carrie Shepherd could have lived anywhere in the US or Canada.


If you have any insights into Carrie Shepherd, J. A. Kneeland or Cousin Mary C. K., please contact me.