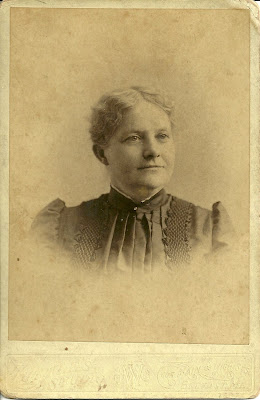 Cabinet photograph of Henrietta Boardman Luce, widow of Albert Shaw Luce, who was born in Monroe, Maine on September 3, 1842.  Luce served in the Civil War and lost a leg there.  It's possible that he is also the Albert S. Luce who was wounded in the head on the second day of Gettysburg.


After the war, he passed the bar and set up a law practice in Belfast in 1870.  On June 1, 1871, he and Henrietta married at Portland, Maine.  Unfortunately, Albert died on January 3, 1873 after a lengthy battle with consumption.   I found an excellent site with genealogies of Monroe families, but didn't see the Luce family.  If you have information on the parents of Albert Shaw Luce, please contact me. 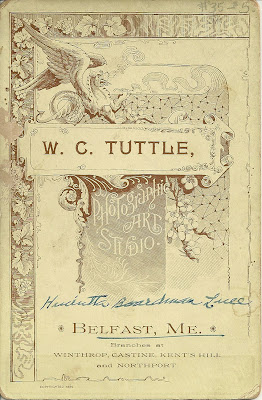 I found Henrietta Luce living in Belfast, Maine, in the 1880, 1900 and 1910 Censuses.  Whether she remarried after 1910, I do not know, but there are no marriages for a Henrietta Luce in the Maine Marriages online database at least.  She would have been 67 in 1910.


As for her parents, it's possible that she is the daughter of Thomas, as indicated on the 1850 Census for Frankfort, Maine.  If so, her mother was possibly dead by 1850, as she is not listed with them.   However, the marriage in Portland makes me wonder if she is the Harriet Boardman I find in the Biddeford and Saco area in the 1860 and 1870 Censuses.  That Harriet Boardman is not shown living with her parents, so she could still be the daughter of Thomas Boardman, despite the distance between Frankfort and Saco.  Another mystery.


If a reader has any insights into the parents of Albert Shaw Luce or Henrietta M. Boardman, please contact me.


Hopefully, you will find this heirloom meaningful.  Thanks for stopping by!

Posted by Pam Beveridge at 5:45 PM