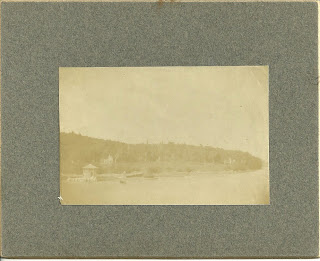 Old photograph of what I am told was the DeMonts Hotel in Calais, Maine, which was located in the area of Devil's Head and Red Beach.  There's a companion photograph, a larger one, showing people standing atop a precipice, probably Devil's Head, a dramatic headland on the St. Croix River.

I could find very little about the DeMonts hotel online, but it seems likely that it was named after Pierre DuGua, Sieur de Mons (or DeMonts), who had explored the area with Samuel de Champlain in the early 1600s.

The hotel was apparently built some time before 1897, as  I found a reference in an 1897 newspaper article where John C. Bunker was planning to lease and restore it.  The man from whom I purchased the photograph knew that the hotel had been destroyed in a fire, but he wasn't sure when.

Nearby St. Croix Island is the site of an ill-fated settlement established by explorers De Mons (or DeMonts) and Champlain in 1604.  The settlement suffered from an unusually harsh winter and the effects of scurvy, with dramatic loss of life; probably more would have succumbed had it not been for the help of the Passamaquoddy tribe on the mainland.  In 1605 the survivors relocated across the Baie Francaise, now known as the Bay of Fundy, to Nova Scotia, where they founded a settlement at Port Royal in the Annapolis Basin.

If anyone wishes to know more about de Mons and Champlain, I heartily recommend Champlain's Dream by David Hackett Fischer.  I heard the author speak at the University of Maine, where he indicated that he decided to write a biography of Champlain mainly because he and his wife summered on Mount Desert Island, also explored by de Mons and Champlain in the early 1600s.

As Mr. Fischer began researching his subject, however, he realized that he had luckily chanced upon a truly fascinating man, one of  incomparable skills and judgment, and a flaw or two, who had  lived during a time of turbulence and intrigue and promise.

Hopefully you will enjoy this memento.  Thanks for stopping by!

Posted by Pam Beveridge at 9:01 AM