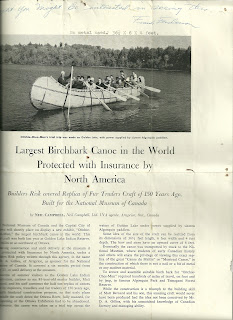 Single page, found removed from unknown magazine about the insurance industry, from about 1956 era; apparently removed by a Frank Fenderson, possibly from Maine, as there was an insurance man by that name in Calais, Maine.

The National Museum of Canada and the Capital City of Ottawa will shortly place on display a new exhibit, "Oitchie-Chee-Mun", the largest birchbark canoe in the world.  This huge craft was built last year [from searching online, I believe the canoe was built in 1955]  at Golden Lake Indian Reserve, 100 miles or so northwest of Ottawa.

"Swarms of summer visitors to the Golden Lake Indian Reservation, curious to see 81-year-old master builder, Matt Bernard, and his staff construct the half ton replica of canoes used by explorers, travellers and fur traders of 150 years ago, actually hindered construction progress, so that early plans to paddle the craft down the Ottawa River, fully manned, for the opening of the Ottawa Exhibition had to be abandoned.

"However, the canoe was taken on a trial trip across the waters of Golden Lake under power supplied by sixteen Algonquin paddlers.

"Some idea of the size of the craft can be realized from its dimensions of 36-1/2 feet length, 6 feet width and 4 feet depth.  The bow and stern have an upward curve of 6 feet.

"Eventually the canoe was transported by truck to the National Museum, where students of early Canadian history and others will enjoy the privilege of viewing this exact replica of the great "Canoe du Maitre" or "Montreal Canoe", in the construction of which there is not a nail or a bit of metal or any modern material.

"To secure and assemble suitable birch bark for "Oitchie-Chee-Mun required hundreds of miles of travel, on foot and by jeep, in famous Algonquin Park and Temagami Forest Reserve.

"While the construction is a triumph to the building skill of Matt Bernard and his son, this amazing craft would never have been produced had the idea not been conceived by Mr. D. A. Gillies, with his unmatched knowledge of Canadian forestry and managing ability."

As you can see from the image, there are two additions, one in handwriting and one with a typewriter.  The handwriting is at top in blue pen: "Thought you might be interested in seeing this.  Frank Fenderson".  The typed portion is just above the photograph: "No metal used.  36-1/2 x 6 x 4 feet."