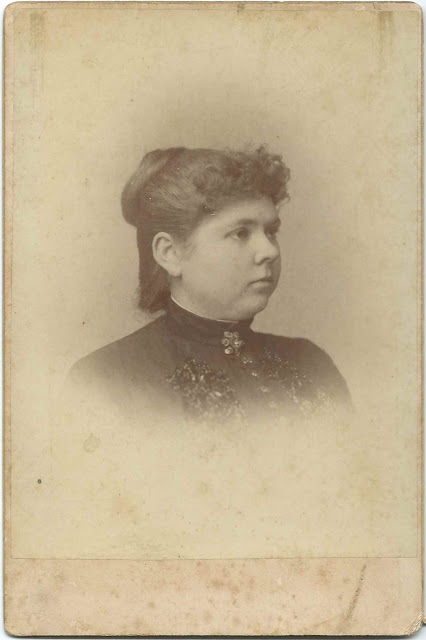 The handwriting  makes the surname appear to be Yound.  I didn't find any records of a Mr. Yound, but many of Abraham  Lincoln Young, who married Louise Mariah Mullin.

The identification was presumably added some time after the photograph was taken because Louise and Abraham did not marry until 1917; she was his third wife, after his many years as a widower.

Interestingly, the 1900 Census of Camden, Maine, notes that Louise was living in the home of her sister Elta, as was widower Abraham Lincoln Young and his son Carleton Parker Young, whose mother was Abraham's first wife Flora (Parker) Young.  The 1910 Census notes that Abraham was living alone at Lincolnville, Maine. 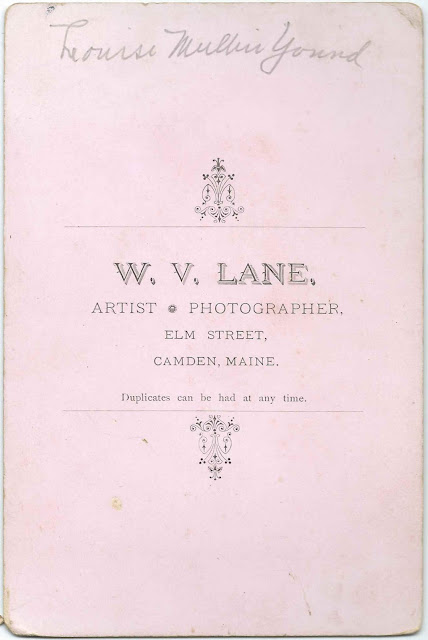 Louise Mariah Mullin, or Mariah Louise Mullin, was born in 1867 at Camden, Maine, to Sea Captain Perez Babbidge Mullin and Mary Hall (Fernald) Mullin, who were born on the Maine islands of North Haven and Vinalhaven, respectively.

On June 2, 1917 at Lincolnville, Maine, Louise married carpenter Abraham Lincoln Young, son of Elijah Young and Nancy A. (Heal) Young.  From some records, it appears that Abraham may have been called "Lincoln".  I'd love to know how he came by his name - had his parents heard of the future president's speeches, maybe even the "Lost Speech"?  Were they were abolitionists?  Of course, it's also possible the name was a coincidence.

Louise died in 1950 and is buried in the Mount View Cemetery at Camden, Maine, with her family members and her husband and his former wives.

Posted by Pam Beveridge at 6:14 AM