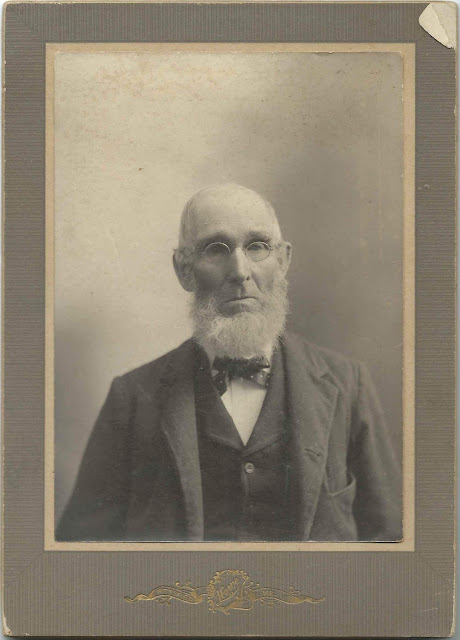 Photograph of an elderly man identified on the reverse as "Grampy Huff"; the photograph was taken by the Howe studio of Pittsfield, Maine.

Because of clues written on the reverse, I believe "Grampy" was Franklin Huff (1821-1912) of Burnham, Maine, whose daughter Lenora married Charles B. Cookson: 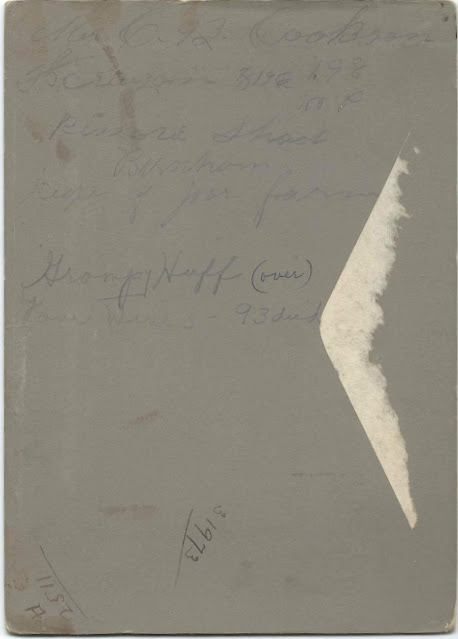 Franklin Huff was born March 1, 1821 and died March 10, 1912 at Burnham, Maine.  He's buried in the Mount Cemetery with wife Dorcas and son Andrew.  I believe Dorcas (Reynolds) Huff was Franklin's first wife and the mother of daughter Lenora.

Note that Franklin's Find a Grave memorial gives his name as Franklin F. Huff, but his monument shows Franklin Huff.

After Dorcas' death, Franklin married Sarah E. Reynolds, who died shortly after their marriage, and then Phoebe D. Cookson, who died in 1892.  I don't have the name of Franklin's fourth wife.  Franklin is shown as "Widowed" in both the 1900 and 1910 Censuses of Burnham.

If the handwriting noting that Franklin had four wives is correct, there were three time frames when this fourth marriage would have been possible, assuming the "Widowed" notations on the 1900 and 1910 Censuses are correct:

It's possible that Franklin's fourth marriage was unofficial.

If you have more information on Franklin Huff of Burnham, Maine or if you feel that Grampy Huff was someone else, please leave a comment or contact me directly.

Posted by Pam Beveridge at 7:03 AM