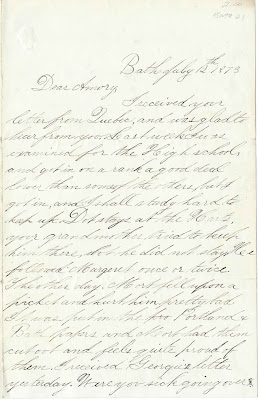 July 12, 1873 letter from young George H. Patten, "Georgie", to his friend Amory McLellan Houghton, who had previously written to George from Quebec, while presumably on a voyage with his father, sea captain John Reed Houghton.  The Pattens and Houghtons were seafaring and shipbuilding families from the Bath, Maine, area.

See another letter written to Amory on this same day by John Owen Patten, perhaps a cousin of George H. Patten, who may have been the Georgie mentioned in John's letter.

Read more about the ancestors of the Patten family in midcoast Maine here.

See images of the panes of Georgie's letter, which you can enlarge by clicking on them, and a transcript at the end of this post.

Mentioned in the letter:

George H. Patten, "Georgie", mentions a sad event, the recent drowning of August Morse and Bertie Anderson, who had borrowed a boat from Ned Sewall [presumably Edward Sewall, the father or more likely his son].  Their bodies were found at Harrington's wharf.  Johnnie noted that speculation was that Bertie had fallen overboard and that August drowned trying to save Bertie.

George H. Patten was born May 12, 1860 in Maine, the son of George M. and Fredericka (Camp) Patten.  He served in the U.S. Army and attained the rank of captain and was injured in the line of duty.  He died in 1832 and is buried in the Maple Grove Cemetery with other members of the Patten family. 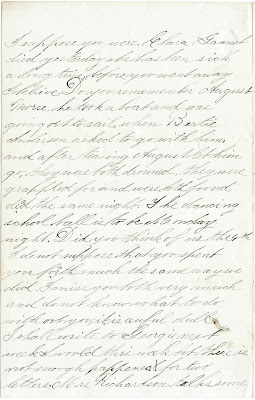 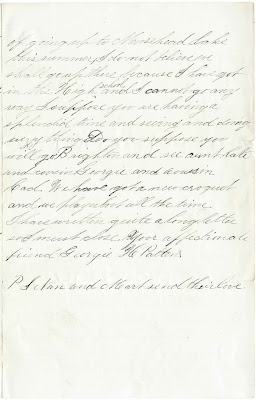 I received your letter from Quebec and was glad to hear from you.  Last week I was examined for the High school, and got in on a rank a good deal lower than some of the others, but I got in, and I shall study hard to keep up.  Dot stays at the Harts, your grandmother tried to keep him there, but he did not stay.  He followed Margeret once or twice.  The other day Mort fell upon a picket and hurt him pretty bad.  It was put in Portland & Bath papers and Mort had them cut out and feels quite proud of them.  I received Georgie's letter yesterday.  Were you sick going over?  I suppose you were. Clara Gannet died yesterday.  She has been sick a long time before you went away, I believe.  Do you remember August Morse?  He took a boat and was going out to sail when Bertie Anderson asked to go with him and after teasing August let him go, they were both drowned.  They were grappled for and were both found dead the same night.  The dancing school ball is to be Monday night.  Do you think of us the 4th?  I do not suppose that you spent your fourth much the same way we did.  I miss you both very much and I do not know what to do without you.  It is awful dull.  I shall write to Georgie next week.  I would this week but there is not enough happens for two letters.  Mrs. Richardson talks some of going to Moosehead Lake this summer.  I do not believe we shall go up there because I have got in the High school and I cannot go any way.  I suppose you are having splendid time and seeing and doing everything.  Do you suppose you will go Brighton and see Aunt Kate and cousin Georgie and cousin Cad.  We have got a new croquet and we play about all the time.  I have written quite a long letter so I must close.  Your affectionate friend Georgie H. Patten.
P.S. Nan and Mort send their love.