1840s/1850s Autograph Album of Hannah Maria Tallman of Orleans, New York; Before and After Marriage to Jerome Bushnell 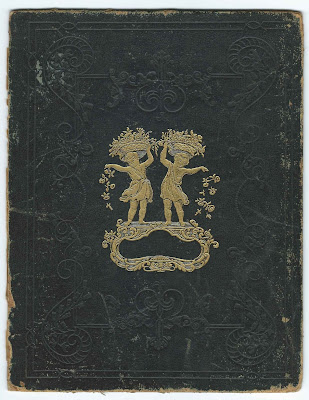 1840s/1850s autograph album that belonged to Hannah Maria Tallman of Orleans, New York, before and after her marriage to Jerome Bushnell. 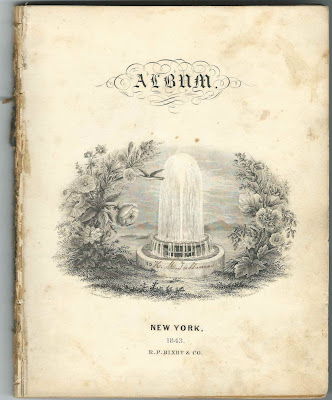 The album, which was published by R. P. Bixby and Company of New York, New York, in 1843, measures approximately 7-3/4" by 6".  It contains the sentiments of about 34 people, several of whom inscribed two pages.  An alphabetical surname list and an alphabetical list of the inscribers, together with any personal information they offered, appear at the end of this post.

The first page of writing in the album, which was presumably inscribed by Hannah herself: 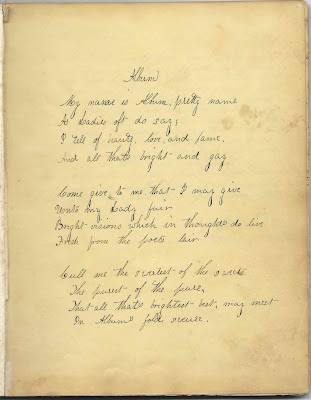 According to an online genealogy of the Bushnell family, unsourced, Hannah Maria Tallman was born July 6, 1832 at Schuyler, New York, the daughter of John and Phoebe (Mather or Mathers) Tallman.  Hannah had, I think, 5 siblings. 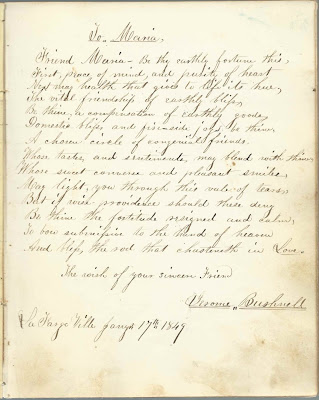 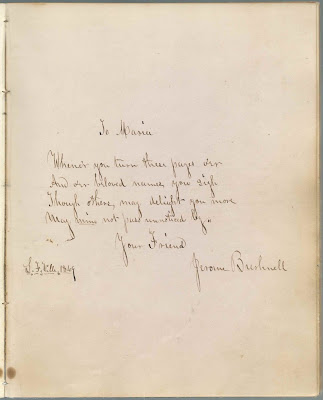 The S. Bushnell who inscribed a page at LaFargeville, a village in Orleans, New York, in 1849 may have been Jerome's sister Sophia Bushnell.

Hannah and Jerome had at least one child, a daughter Jennete, born November 24, 1852 at LaFargeville, New York.  Jennete married Charles Schwartz.  Jerome died in 1904, and Hannah in 1932, a few months before her 100th birthday.


Inscribers in the Album - Given names within a specific surname might not be in alphabetical order.