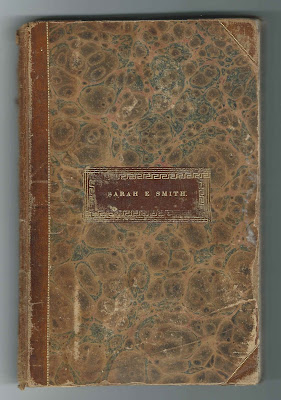 1830s autograph album that belonged to Sarah Elizabeth Smith of Exeter, New Hampshire, with entries from before and after her marriage to Reverend David Eastman, a native of Amherst, Massachusetts. 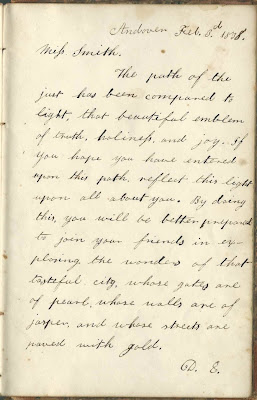 Sarah may have first met Rev. Eastman at Andover, Massachusetts, when he was at Andover Theological Seminary.  Several of the inscribers mentioned the Abbott Female Seminary at Andover, and Sarah also may have been a student there.

The album measures approximately 7-1/2" by 5" and has separated over the years into a small section and a large section.  There's not title page, and I don't know if it's missing or if there ever was one.  There may be as many as 69 different well wishers, but there might be a few who left multiple sentiments.  In that era, many people signed with only initials or initials and a surname.

An alphabetical surname list and an alphabetical list of the inscribers, together with any personal information they offered, appear at the end of this post.  Three pages have a hand-colored design at the top, such as that below.  One page has a black and white design at top.

Sarah Elizabeth Smith was born at Exeter, New Hampshire, the daughter of Joseph and Sarah Smith.  Her date of birth, as listed on the Eastman stone at Leverett, Massachusetts, is October 5, 1815.  I haven't yet found the maiden name of Sarah's mother Sarah.

Three, possibly four, people named Smith inscribed pages in the album, but I don't know if they were from Sarah's immediate family or not.  They were:

Additionally, an E. S. inscribed a page at Andover, Massachusetts, possibly a student at Abbott Female Seminary.  And an inscriber with initials I'm having a hard time interpreting called Sarah a cousin.   The page was inscribed at Andover, Massachusetts, on March 26, 1836.  The initials are possibly S. K. W. S. or S. K. W. with a flourish at the end.  If the answer jumps out at you, please leave a comment or contact me directly.

On January 31, 1839 at Woburn, Massachusetts, Sarah married David Eastman, son of John and Hepzibah (Keyes) Eastman.  David was born at Amherst, Massachusetts, on June 16, 1806.  Sarah and David had two children before Sarah died on March 3, 1843.  She's buried at Long Plain Cemetery at Leverett, Massachusetts, along with her husband and his second wife Emily (Pomeroy) Eastman.

Among the interesting pages inscribed in the album are these below.  The first was inscribed in August 1834 by someone with the initials that appear to be I. T. G, though I'd appreciate the interpretation of others.  Several people used the surname initial G; in addition, two inscribers were Elizabeth Gould and Olive Gilman, who inscribed her page at Thornton, but didn't mention a state.  The bottom page is sadly unsigned. 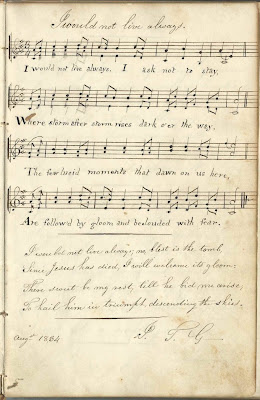 
Inscribers in the Album - Given names within a surname might not be in alphabetical order.
B
C
D
E
F
G
H
K
L
M
P
S
T
W

Posted by Pam Beveridge at 8:19 AM