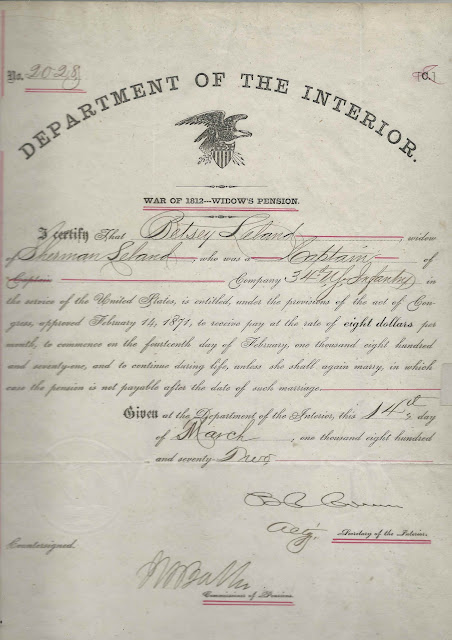 War of 1812 Widow's Pension, No. 2028, for Betsey Leland, widow of Sherman Leland, a Captain with the 34th Infantry at Fort Sullivan at Eastport, Maine, on Moose Island.  The pension awarded Betsey $8 a month. 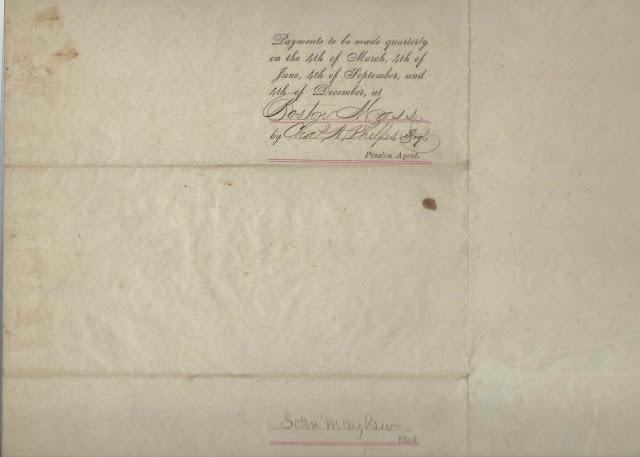 Signatures on the front of the document, which measures approximately 12" by 9":

Signatures on the reverse of the document 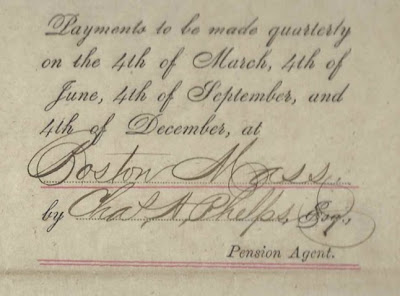 Sherman Leland was a Massachusetts native who moved to Eastport, Maine, on Moose Island in Passamaquoddy Bay, about 1810 to set up a legal practice.  He joined the local militia a few months after his arrival.  In 1813, he was appointed Captain in the 34th Infantry and served at Fort Sullivan, located on a promontory at Eastport, until June of 1814.

A month later Fort Sullivan was captured by a British fleet, whereupon Leland left to settle at Roxbury, Massachusetts.  Moose Island was held by the British until 1818, when it returned to U.S. control.

More information on Sherman Leland comes from a brief biography published in a Maine State Bar Association publication in 1922.

During his term at Fort Sullivan, Leland was one of a group of officers disenchanted with their commanding officer, George Ulmer.  Ulmer was ultimately discharged and felt he had been unfairly maligned, especially by Leland.  Eventually, Ulmer managed to have his rank restored, in name only, thanks to his acquaintance with Maine Congressman Richard Cutts.  Cutts was married to Dolly Madison's younger sister Anna Payne Cutts, and arranged for Ulmer to have an audience with President Madison, who proved sympathetic to the difficulties Ulmer had faced in trying to rein in the flourishing smuggling industry in the border area of Maine and New Brunswick.

More information on the dispute between George Ulmer and Sherman Leland and on smuggling in the Passamaquoddy Bay area:
From online research, hopefully correct:  [corrections and additions welcome!]