1816 Letter from Peter H. Green, or Peter N. Green, of Bath, Maine, to Samuel B. Morris at Philadelphia, Pennsylvania: re: Curacao 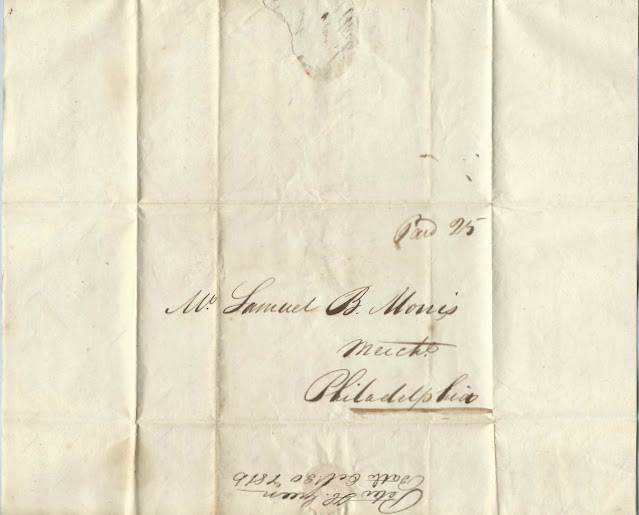 October 30, 1816 letter from Peter H. Green, or Peter N. Green, of Bath, Maine, to Samuel Morris at Philadelphia, Pennsylvania.  The letter concerns prospects on the island of Curacao.

On the address side, the middle initial appears to be H, and I found records for a Col. Peter H. Green of Bath.  On the correspondence side, the initial looks more like an N, but could be an H, and I found a listing for a stone at the Maple Grove Cemetery at Bath, Maine, that includes the name Col. Peter N. Green. 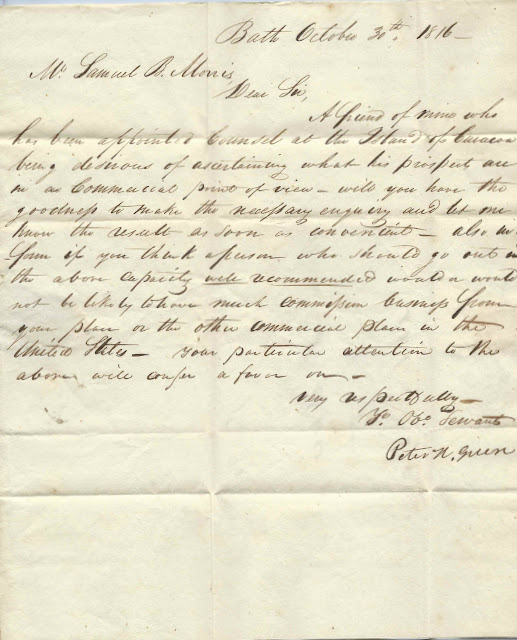 Peter H. Green was a merchant and shipbuilder at Bath, Maine; many of his papers are archived at the Penobscot Marine Museum at Searsport, Maine.  The description of the archive:

Includes miscellaneous bills for goods and services (1825-1837); accounts of/or relating to various vessels including Palalox (1823), Portrait (1828-1829), Carpenter (1824), Hannah (1825), Retrieve (built 1817), Jane Carlton (1825, 1828), Paramount, and Thorn; documents pertaining to several court suits and actions in which Green was involved; custom collector's certificate (1835) for duty paid on Indian moccasins imported from Canada; and miscellaneous business bills and receipts. Gardner Green, shipbuilder, also of Bath, and some other family members are also represented in the collection.

Either Peter N. Green and Peter H. Green are the same person, or perhaps father and son or other relation; hopefully a reader will weigh in.

Bath, October 30, 1816
Mr. Samuel B.Morris
Dear Sir,
A friend of mine who has been appointed Counsel at the Island of Curacao being desirous of ascertaining what his prospects are in a Commercial point of view - will you have the goodness to make the necessary enquiry and let me know the results - as soon as convenient - also inform if you think a person who should go out in the above capacity well recommended would or would not be likely to have much commission business from your place or the or the other commercial places in the United States.  Your particular attention to the above will confer a favor on -
Very Respectfully,
Your Obedient Servant
Peter N. [or H] Green

I found an online reference that Curacao returned to Dutch control in 1816, which may have been the occasion of the appointment of a new consul.  The consul from 1816 to 1817 was Abel Boynton of Massachusetts, presumably the Abel Boynton born about 1783, possibly at Westford, Massachusetts, son of Minuteman Abel Boynton and wife Polly (Abbot) Boynton.  The younger Boynton was a lawyer at Bath, Maine, and would have been an acquaintance of the letter writer.

Samuel B. Morris may have been Samuel Buckley Morris (1791-1859), who married into the Perot family, which had interests in the Caribbean.

If you have more information on Peter H. Green and/or Peter N. Green, Abel Boynton or Samuel B. Morris, please leave a comment or contact me directly.

Posted by Pam Beveridge at 9:54 AM