Collection of over 100 manuscript items that belonged to Loring Dunnells of Cornish, Maine; they span from the 1860s to 1920 or beyond.  See an alphabetical list of people mentioned in the document at the end of this post.  The papers consist of:

On June 26, 1865 at Parsonsfield, Maine, Loring married Almira B. Weeks, daughter of Samuel and Susan (Eastman) Weeks.  Almira died in 1872.   If they had any children, I didn't find a record of them.

On September 29, 1873, at Freedom, New Hampshire, Loring married Nellie Flora Storer, daughter of George W. Storer and Caroline (Warren) Storer.  Loring and Nellie had, I believe, three children, and they may have raised their granddaughter Reta B. Dunnells, unless Reta was a later child.  She's described as their granddaughter on the 1900 Census of Cornish, Maine.  Children of Loring and Nellie:
Loring Dunnells died in 1922 at Cornish, Maine.  If you have corrections and/or additions to the information above or information on any of the people listed at the end of this post, please leave a comment or contact me directly.

In addition to the Maine Pension Certificate pictured above, 4 other pension items are included.  Whether or not, any of these items deals with Loring's application for his federal pension in 1889, I don't know.  Below, the scrap of paper where Loring wrote down his Civil War service, probably in connection with filling either of his pension applications: 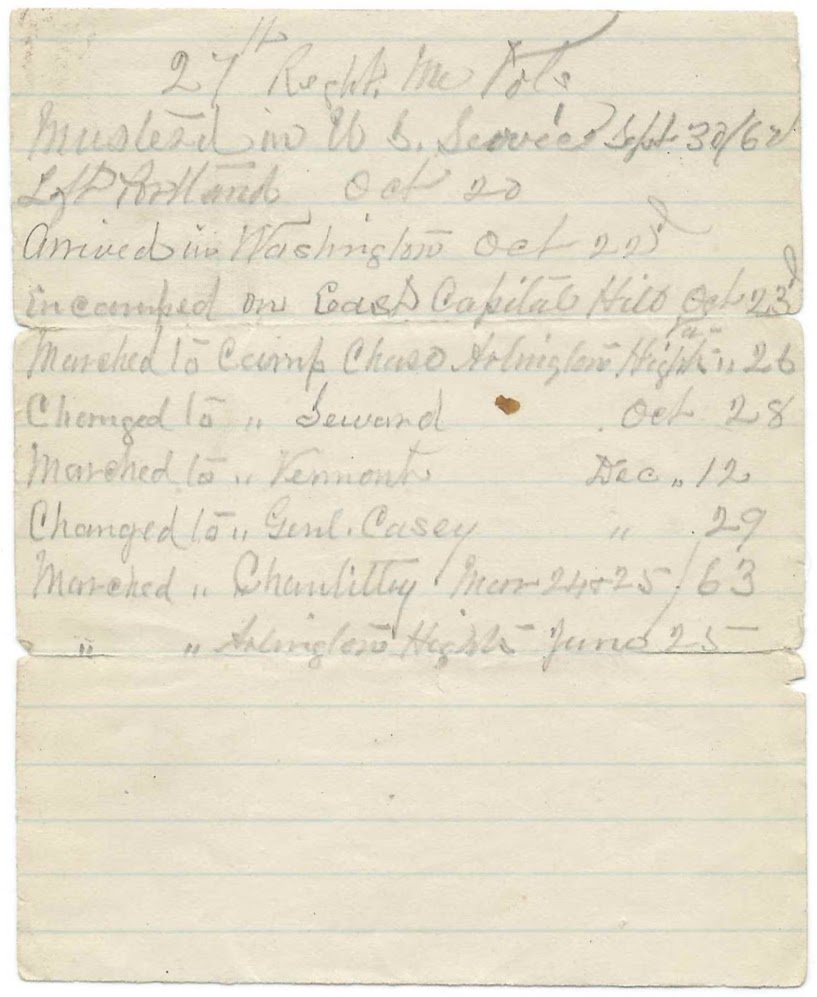 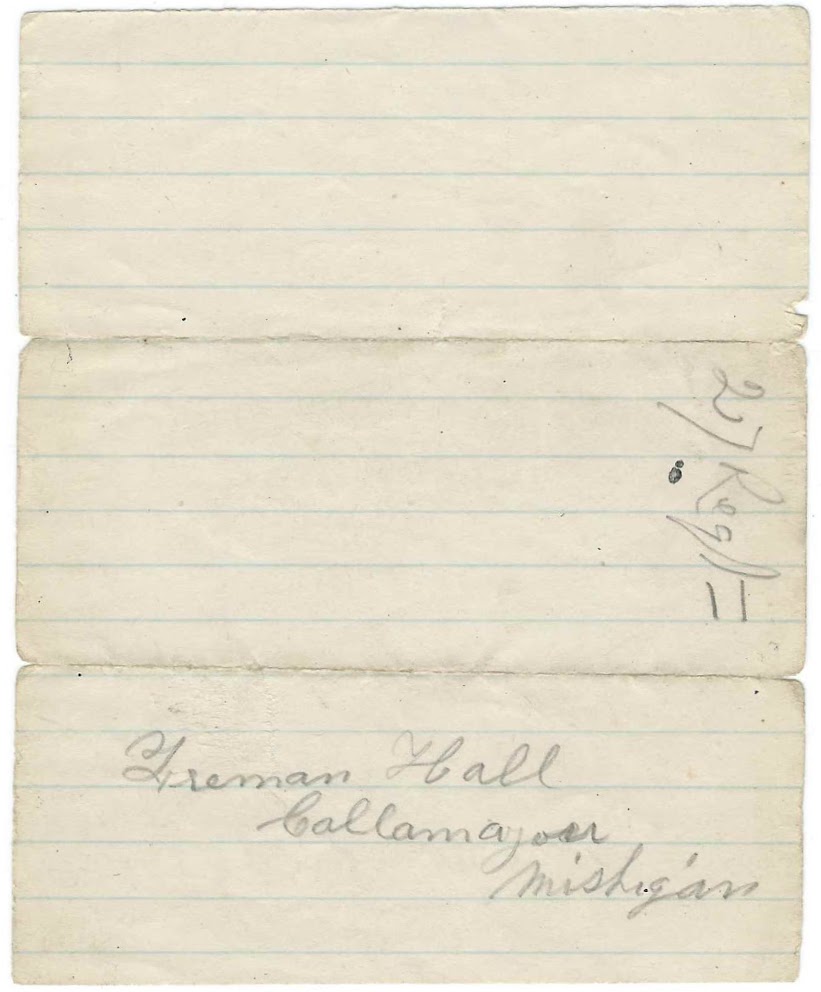 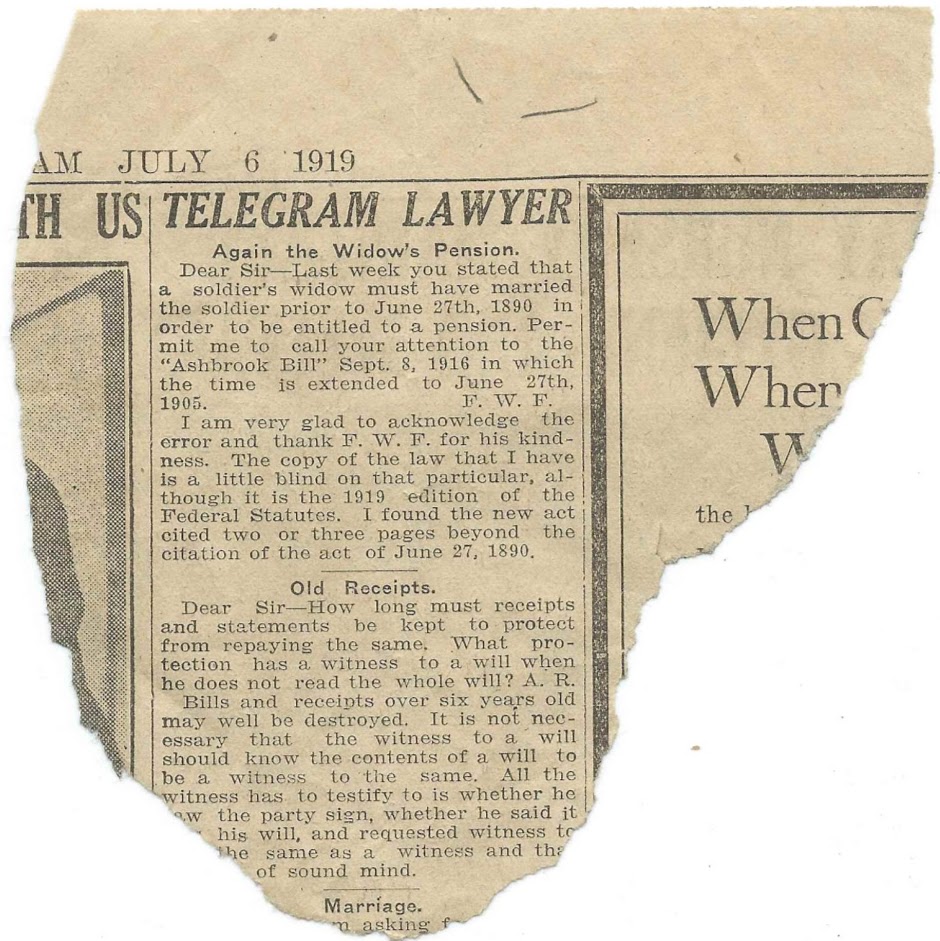 An example of one of the legal documents: a deed where Loring sold Joseph Moulton a tract of land in Parsonsfield, Maine in 1867. 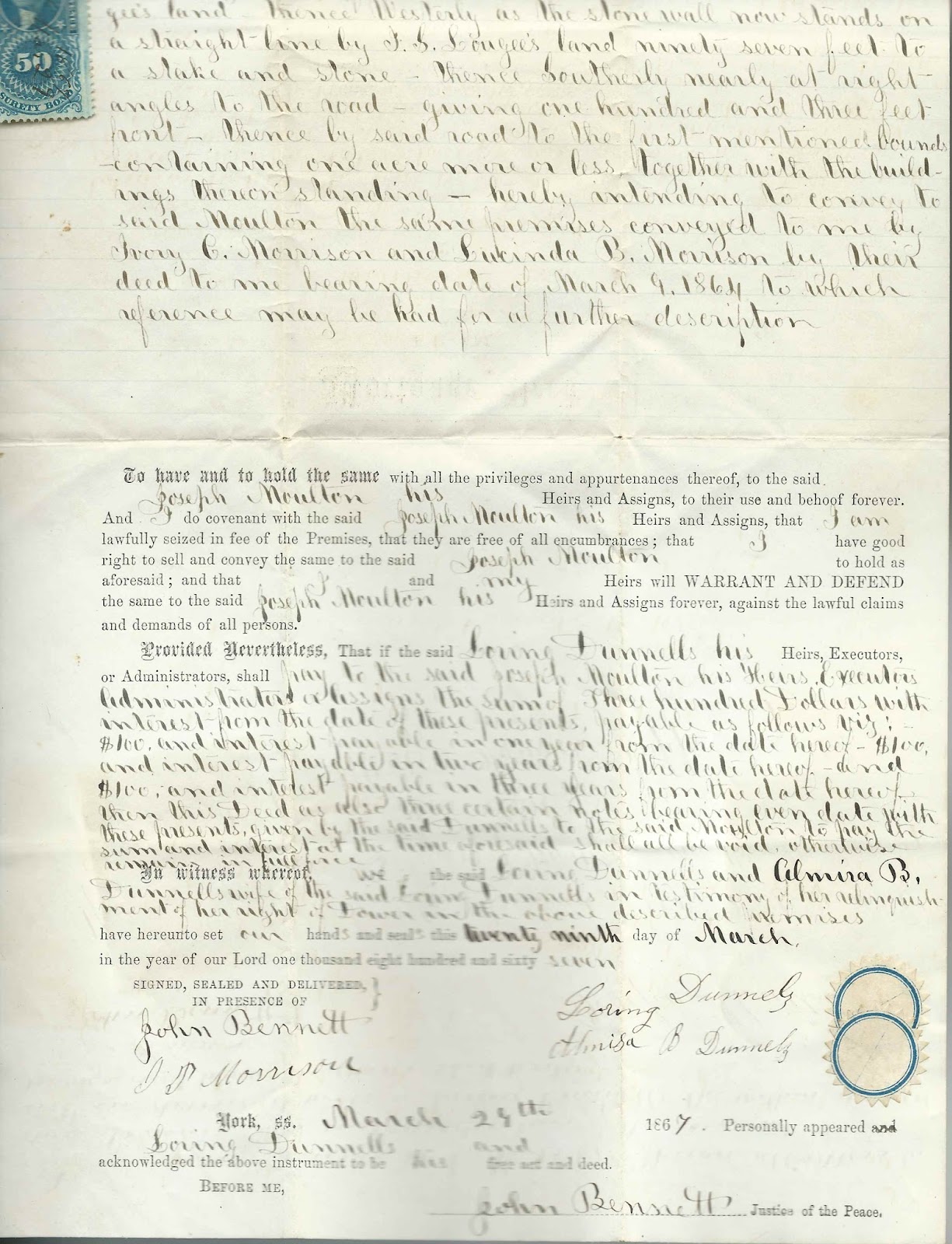 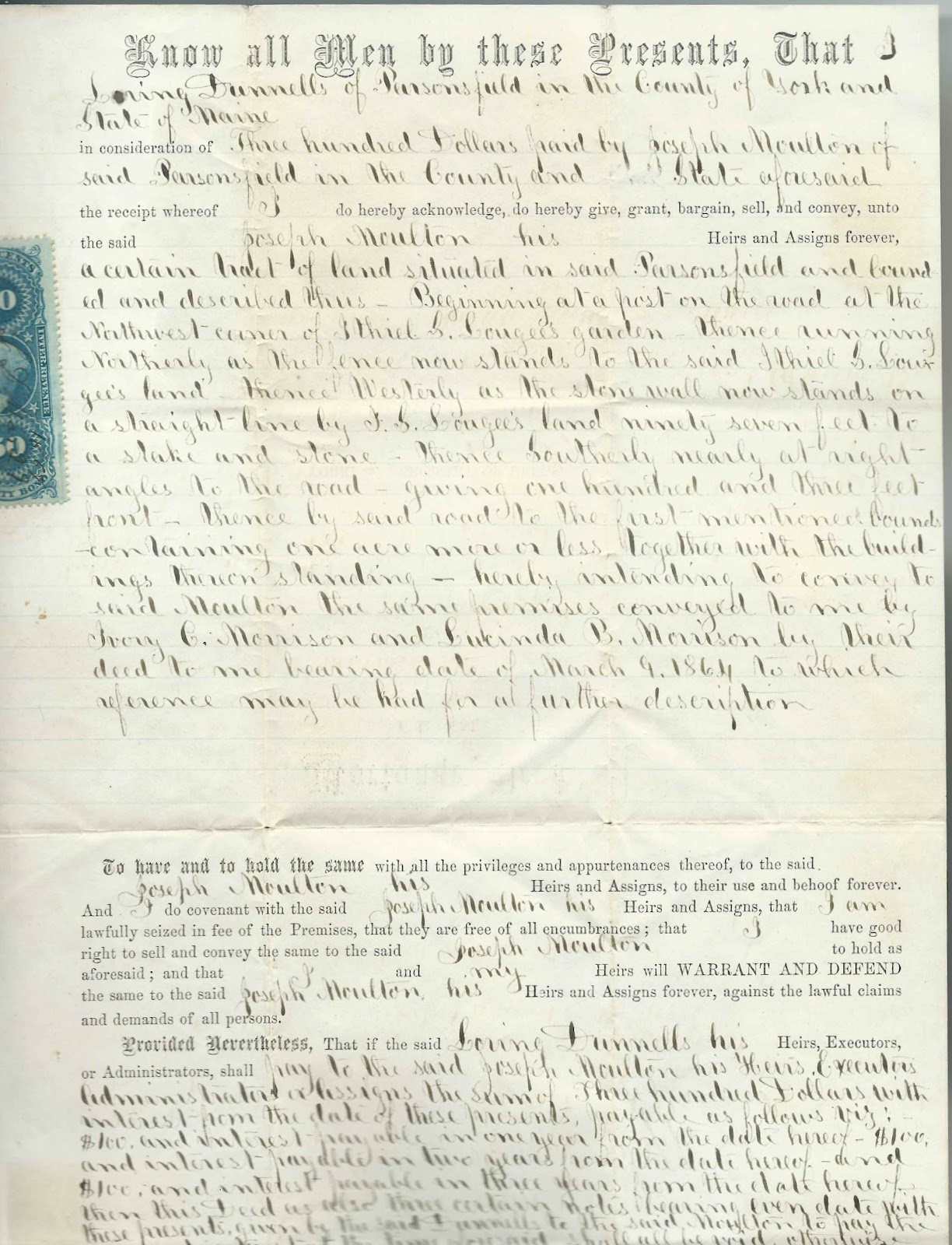 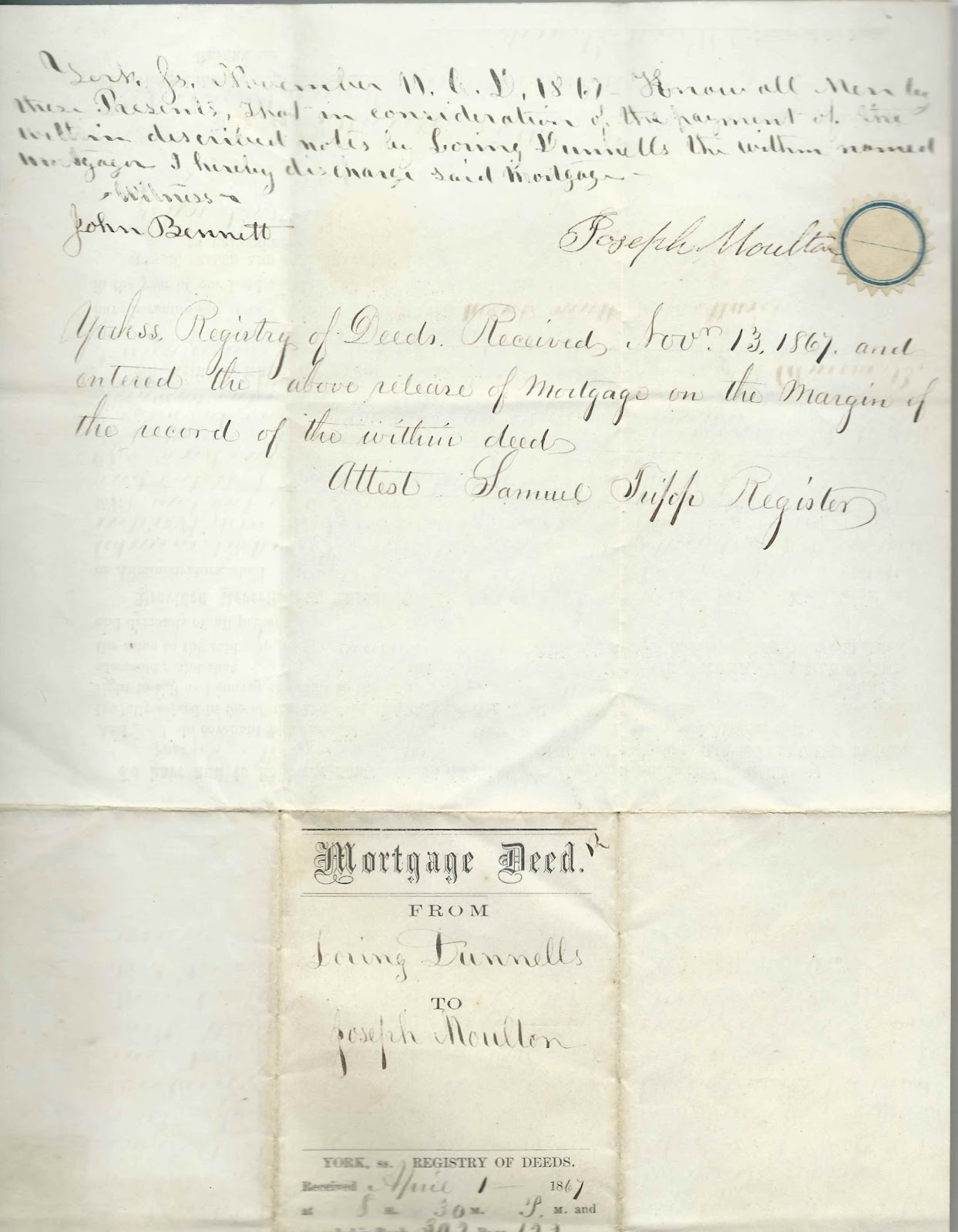 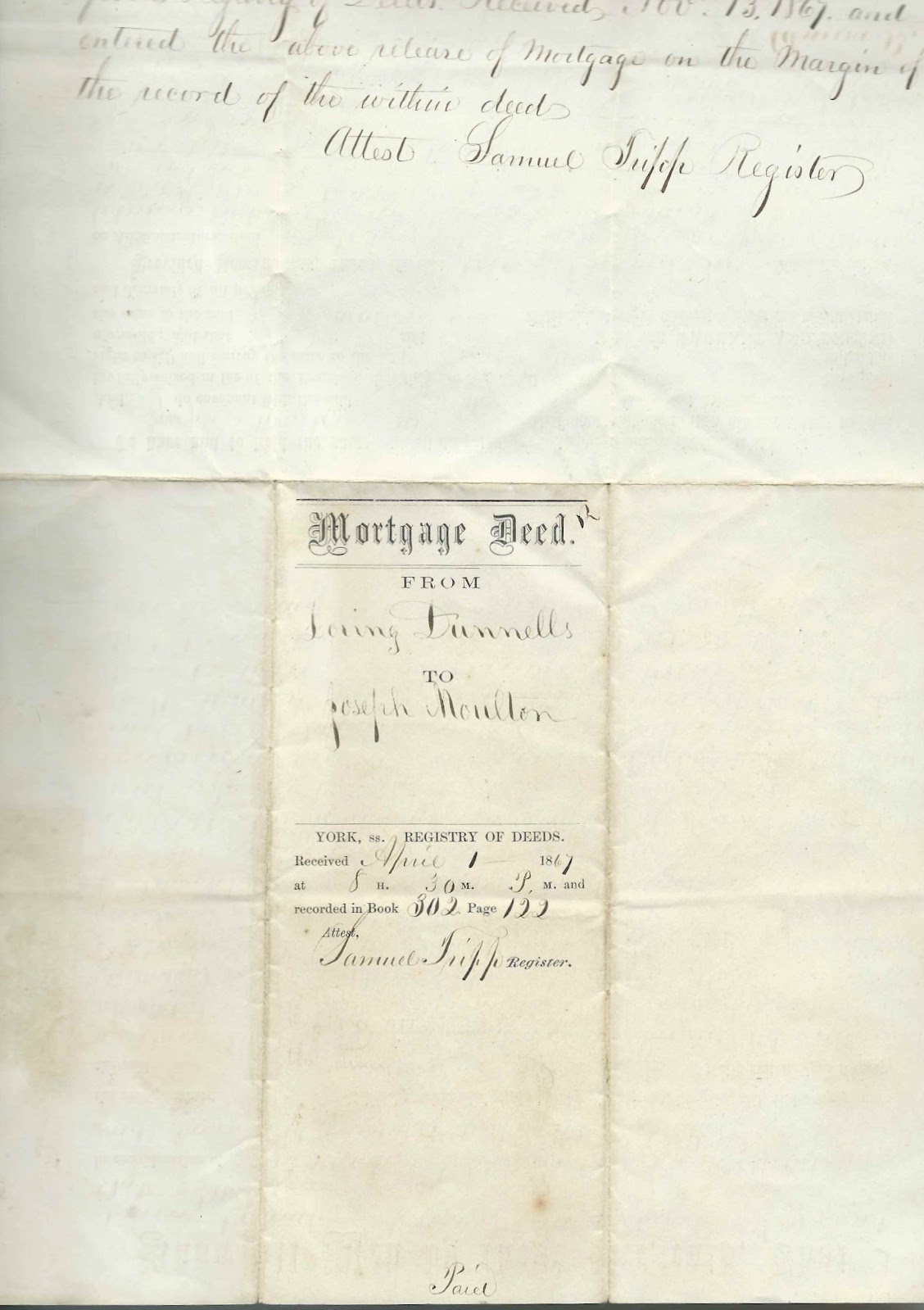 Many of the papers are receipts for the quarterly rental that Loring paid G. W. Adams of Cornish, Maine.   Adams was presumably George W. Adams, a carpenter, painter and mill owner.  An example: 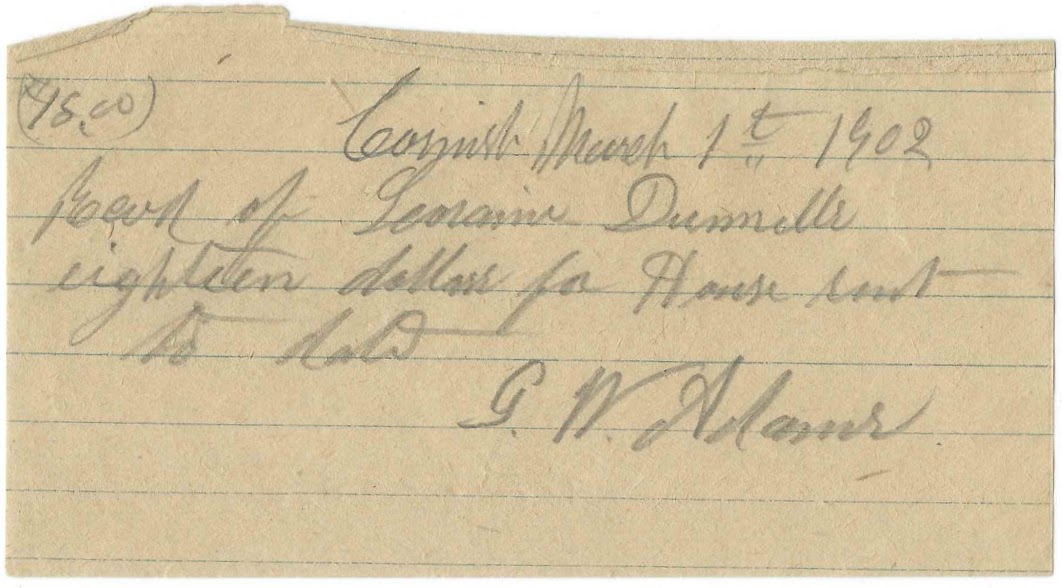 Names included in the collection [there are more, some of them too faint to decipher]


Two other posts featured items from this collection:

Posted by Pam Beveridge at 9:46 AM