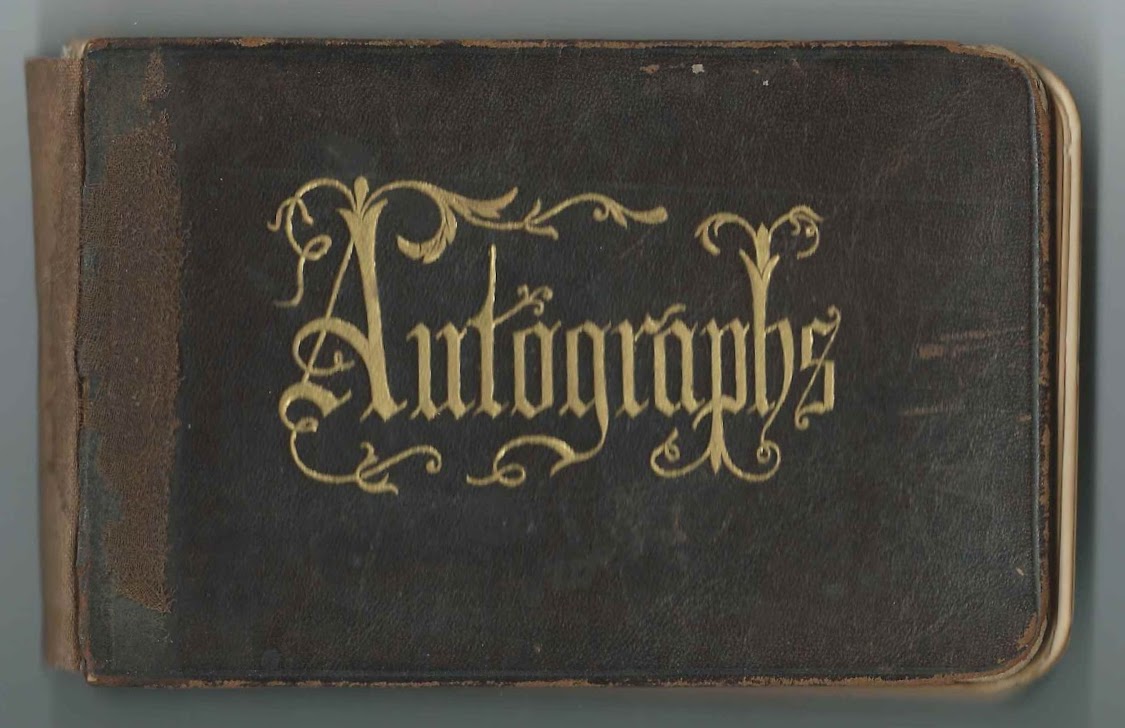 Autograph album given to Martha (Forbes) Tremayne, "Pattie", of Brooklyn, New York, on her birthday, July 16, 1875, by her mother Elizabeth Anastasia (Carroll) Forbes.

Many pages of the album are enhanced by the later notes of one, or more, of the 9 children of Pattie's brother John Forbes and his wife Blanche Rose (Purcell) Forbes.  One of the notes describes an inscription written in 1890.  By that time, both of their daughters and one son had died.  Another son, William Tremayne Forbes, was described in a note as "My Brother".  That leaves:
The album measures approximately 5-1/4" by 3-1/4" and contains the sentiments of 20 of Pattie's relatives and friends.  An alphabetical surname list and an alphabetical list of the inscribers, together with any personal information they left and the added notes, appear at the end of this post.

Much information about Pattie's relatives by blood and marriage, including lengthy descriptions of Pattie, her parents, siblings and husband, can be found in The Descendants of William Forbes, A Genealogical and Biographical History of that Branch of the Family of Forbes, written by Arthur Carroll Forbes and published in 1955.  Search for specific names; you'll find them described in more than one section, including diary and personal recollections.

Pattie had, I think, six siblings, four of whom inscribed pages in the album.  In page order:
On June 26, 1873, at Brooklyn, New York, Martha Forbes, "Pattie", married accountant William Henry Tremayne; he was born on the island of Jamaica about 1829.  The book above describes each of them, in more than one section, and their unusual marriage of long periods apart, perhaps resulting from their age difference and financial reversals that William suffered in 1884.  He inscribed a page in Pattie's album in 1875.

Pattie and William had no children.  Presumably in William's honor, Pattie's brother John and wife Blanche named one of their sons William Tremayne Forbes, "Treet".  William Henry Tremayne died in 1896, and Pattie in 1929.  They're buried at Green-Wood Cemetery at Brooklyn, New York.