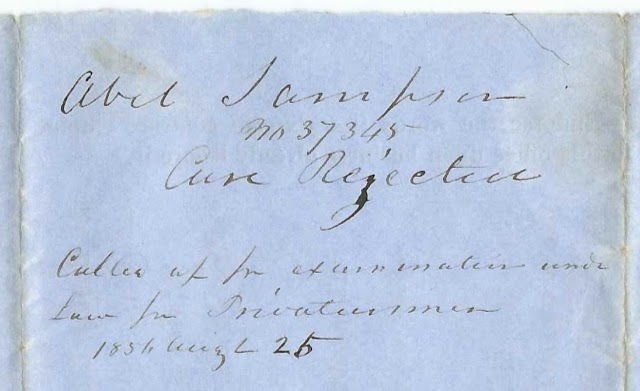 October 13, 1855 document from the Pension Office suspending the claim for Bounty Land of Abel Sampson who had based his claim on his service aboard the American privateer Yorktown.

This document was found with another Bounty Land claim document with the name of Hugh Davis McLellan on it.  That claim was pursued by Almira Skillen based on the service of her late husband Enoch Skillen.

The Abel Sampson document, shown below, with the printed signature of Pension Office Commissioner J. Minot, states that the claim is suspended because, as an Auditor reported, "The rolls of said ship not on file in this office."  The name Hugh D. McLellan, Esq., of Gorham, Maine, appears at the bottom of the document, which was apparently addressed to him.  I don't know if Hugh Davis McLellan represented claimants or was a Maine representative of the Pension Office. 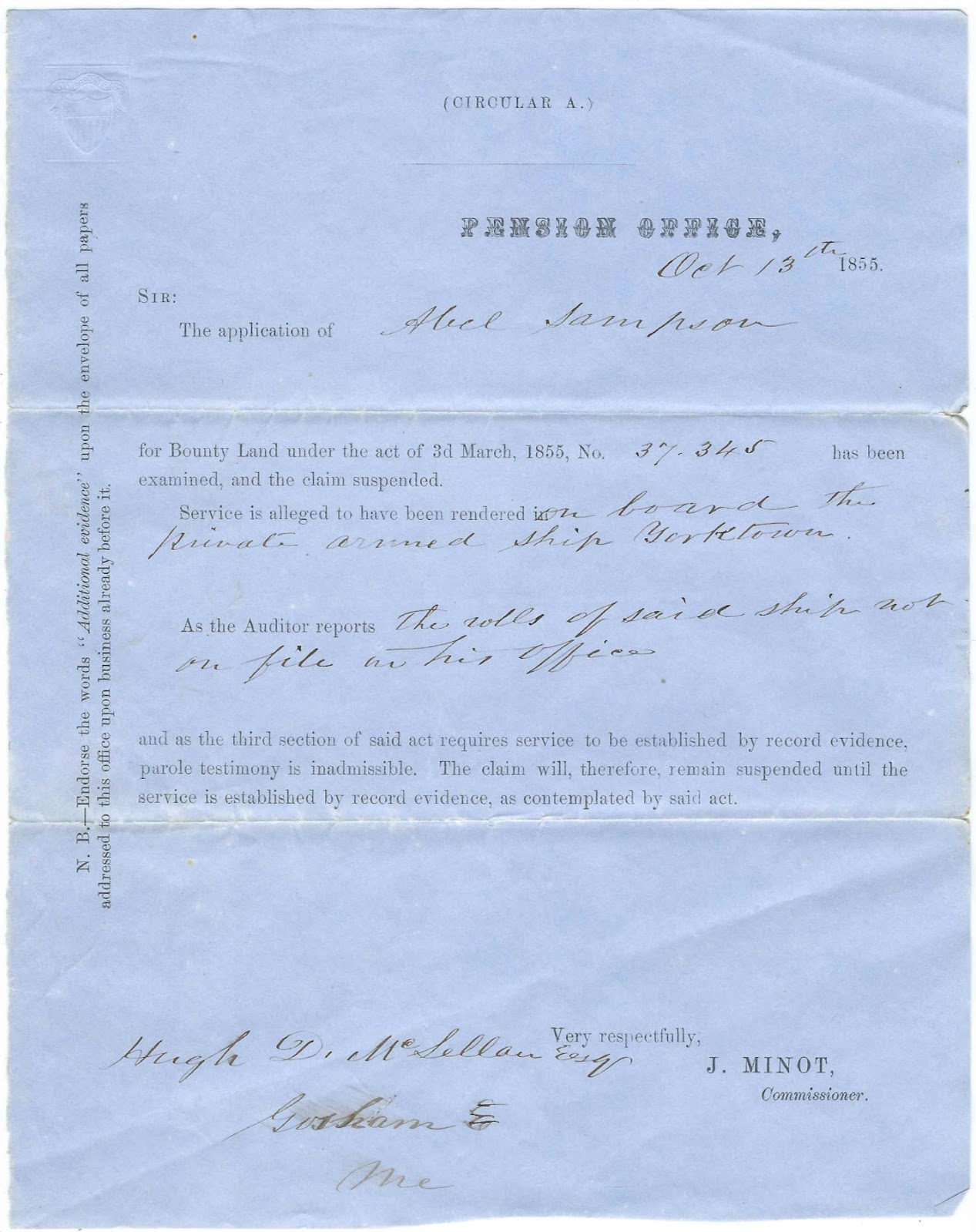 Abel Sampson later related his exploits to author Edmund Hale Kendall, who produced "The Wonderful Adventures of Abel Sampson, as Related by Himself", published at Lawrence, Massachusetts, in 1847.   Below, Abel's likeness from this book: 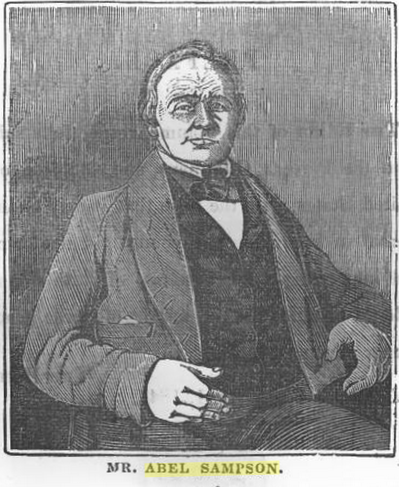 Click here to see a description of the book and a color photograph of its cover.

As he related to the author of the book above, Abel Sampson was born August 24, 1790 at Turner, Maine, the son of Seth and Appie (Pomphilly or Pompelie) Sampson.  The New England Historic Genealogical Society records show his birth as August 24, 1787.  Appie was the daughter of Capt. John Pumphilly of Duxbury, Massachusetts.  Seth, son of James Sampson, was also from the Duxbury area.

After the his career at sea, Abel became a planemaker at Portland, Maine.    He mentions that he married in 1821, but does not give his wife's name.  The 1825 Portland fire destroyed much of his property.  In 1837 he moved to Gorham, Maine, and in 1846 to Lawrence, Massachusetts, where he presumably met author Edmund Hale Kendall.  An archive of Abel Sampson's papers is held at the Maine Historical Society.

It appears that Abel returned to Maine.  The 1850 Census lists an Abel Sampson and wife Sarah, a Maine native.  The 1860 Census shows them living at Gorham, Maine, again; Sarah is shown as a New Hampshire native.  Abel died at Portland, Maine, at the age of 93, in 1879.

A contemporary account of Abel's life, "Maine's Privateer Turned Planemaker", was written by Dale Butterworth and Bennett Blumenberg, and published in The Chronicle in 1992.  And it appears that another book, "Life of Abel Sampson" was published at Portland, Maine, in 1860, but I haven't found it digitized. 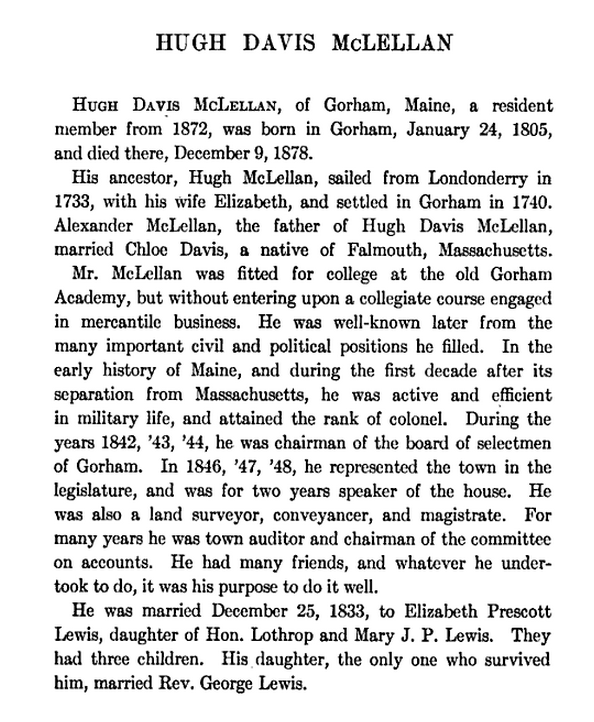 McLellan was also an amateur historian and author, who wrote The History of Gorham with his daughter Katherine Bigelow Lawrence (McLellan) Lewis, wife of Rev. George Lothrop Lewis.  An archive of papers, notes and correspondence of Hugh Davis McLellan and family are held at the Maine Historical Society at Portland, Maine. 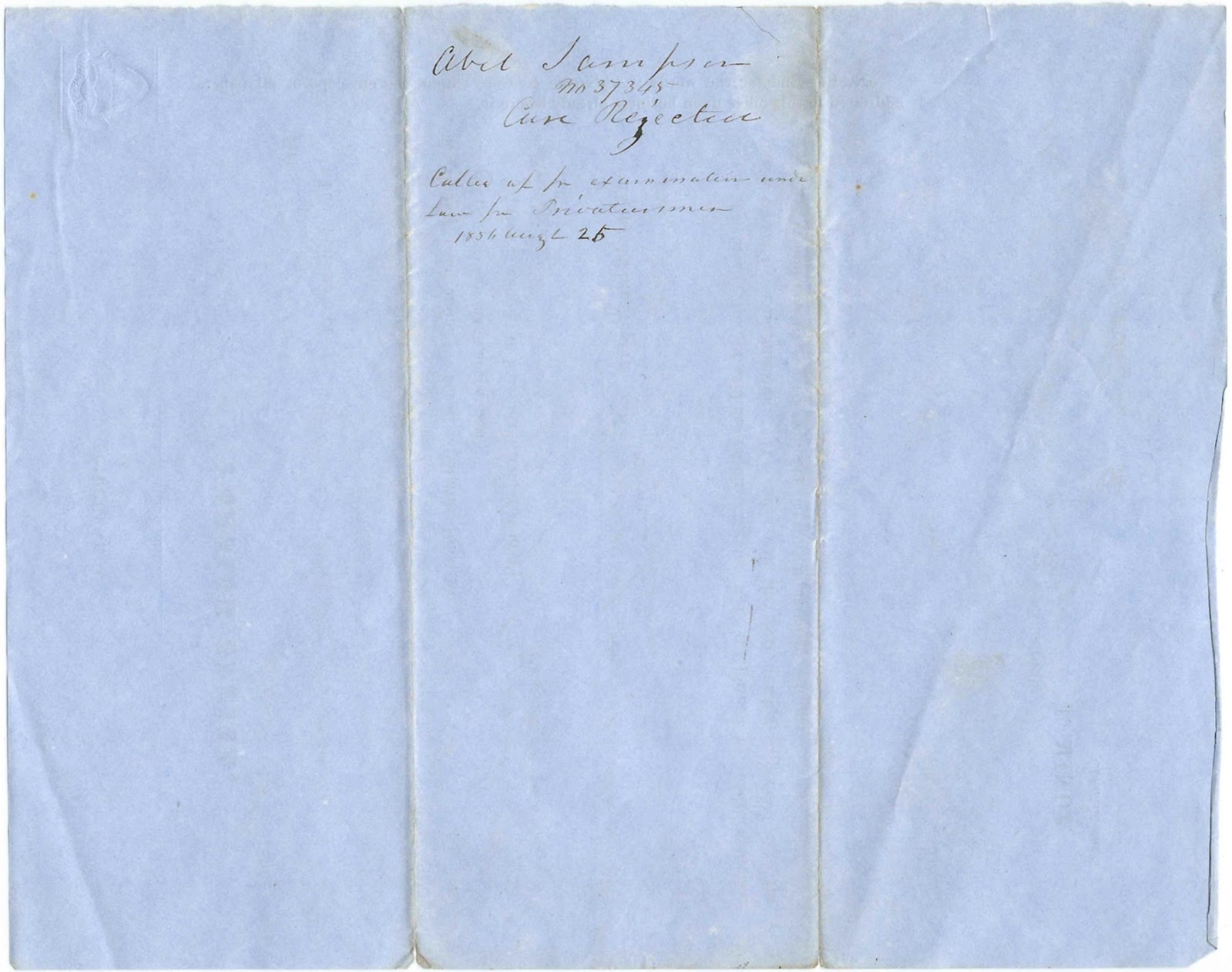