1893 Cabinet Photo of Nettie Maxson Cleever of Emporia, Kansas + 1885 letter to her from her Grandmother 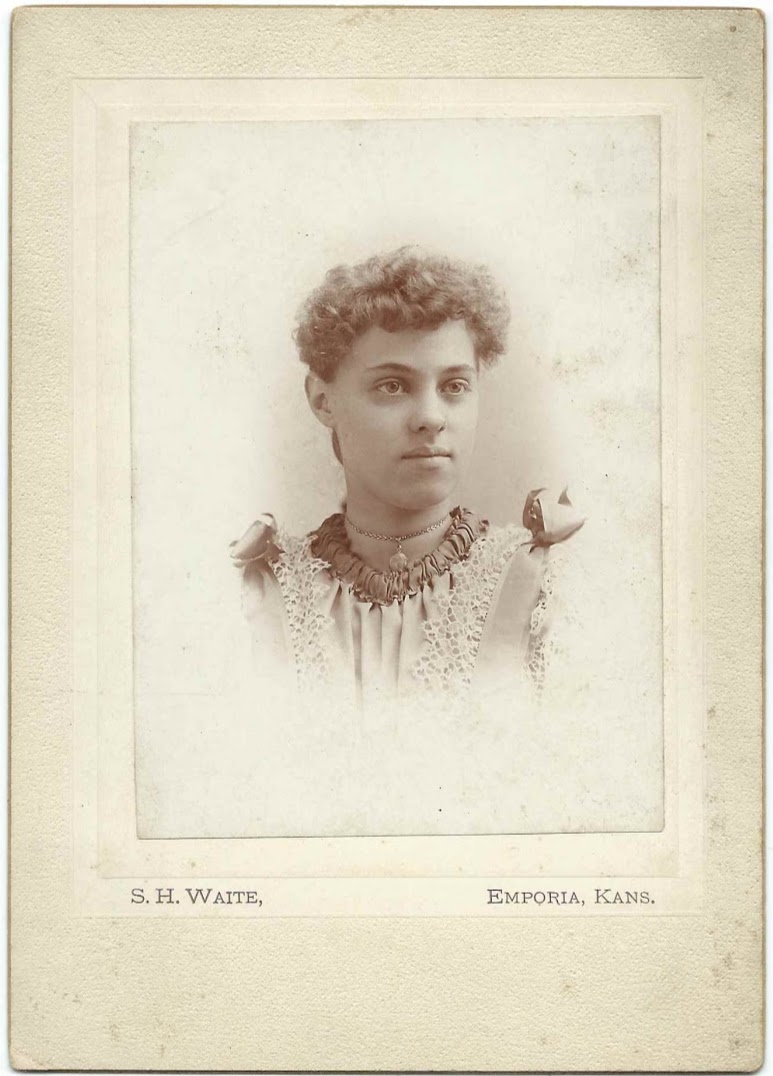 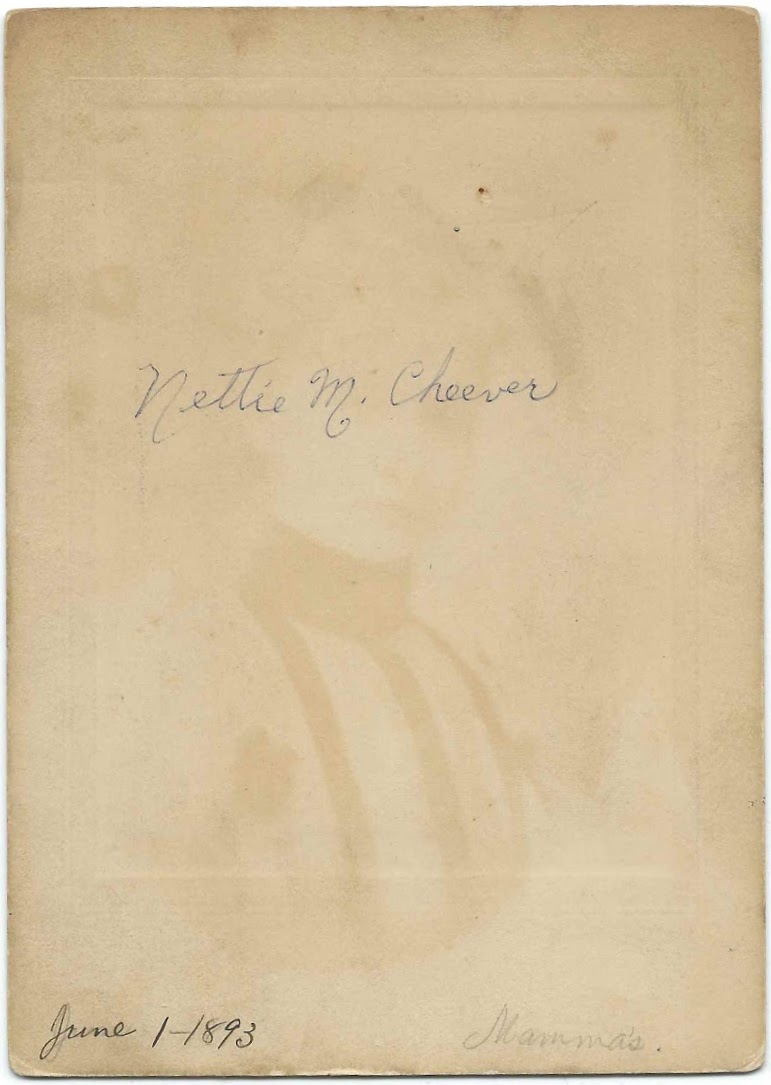 The letter must have been a welcome sight, for more than just family news, as Grandfather apparently enclosed $50 in it for Nettie's mother.  Click on a page to enlarge it. 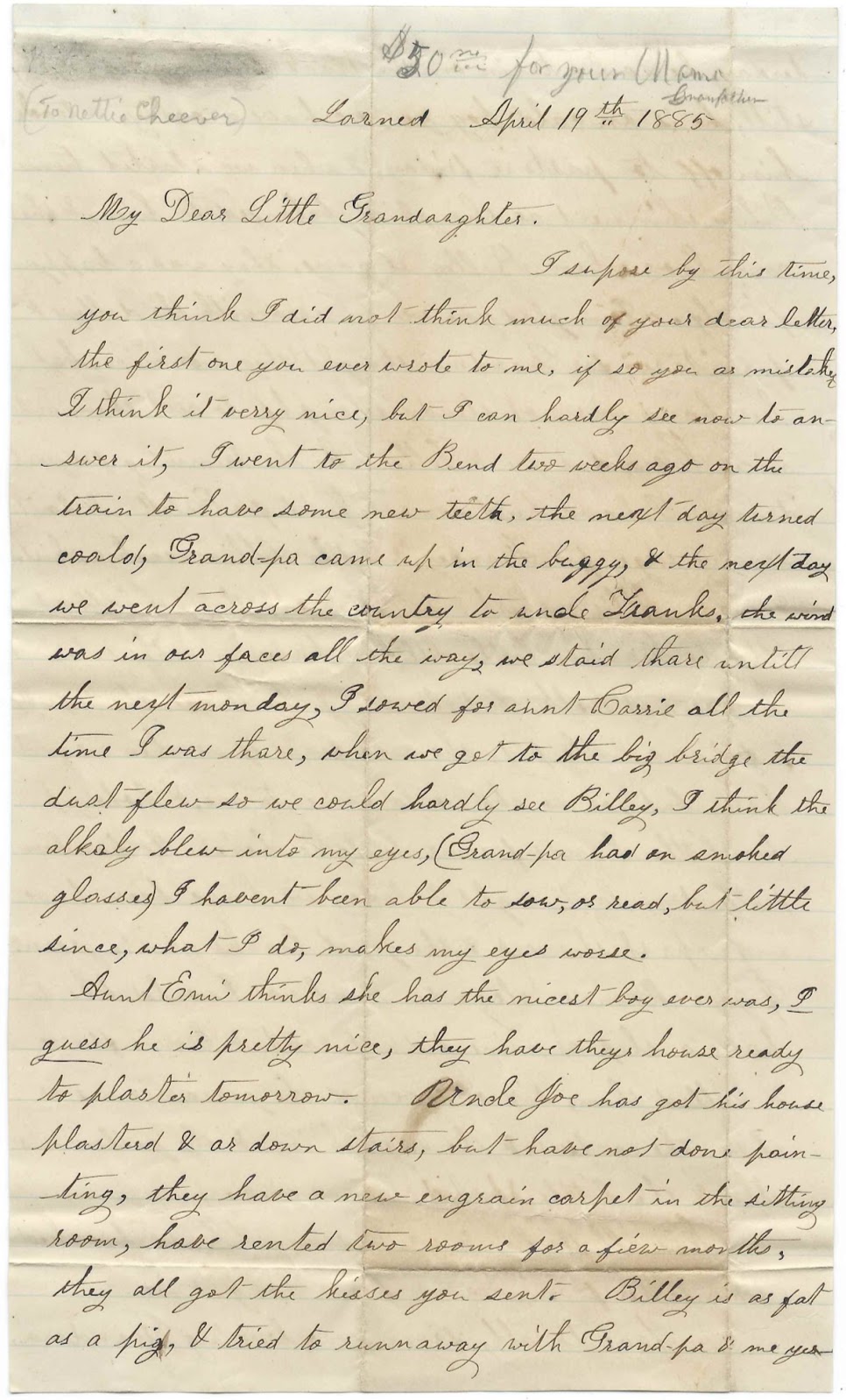 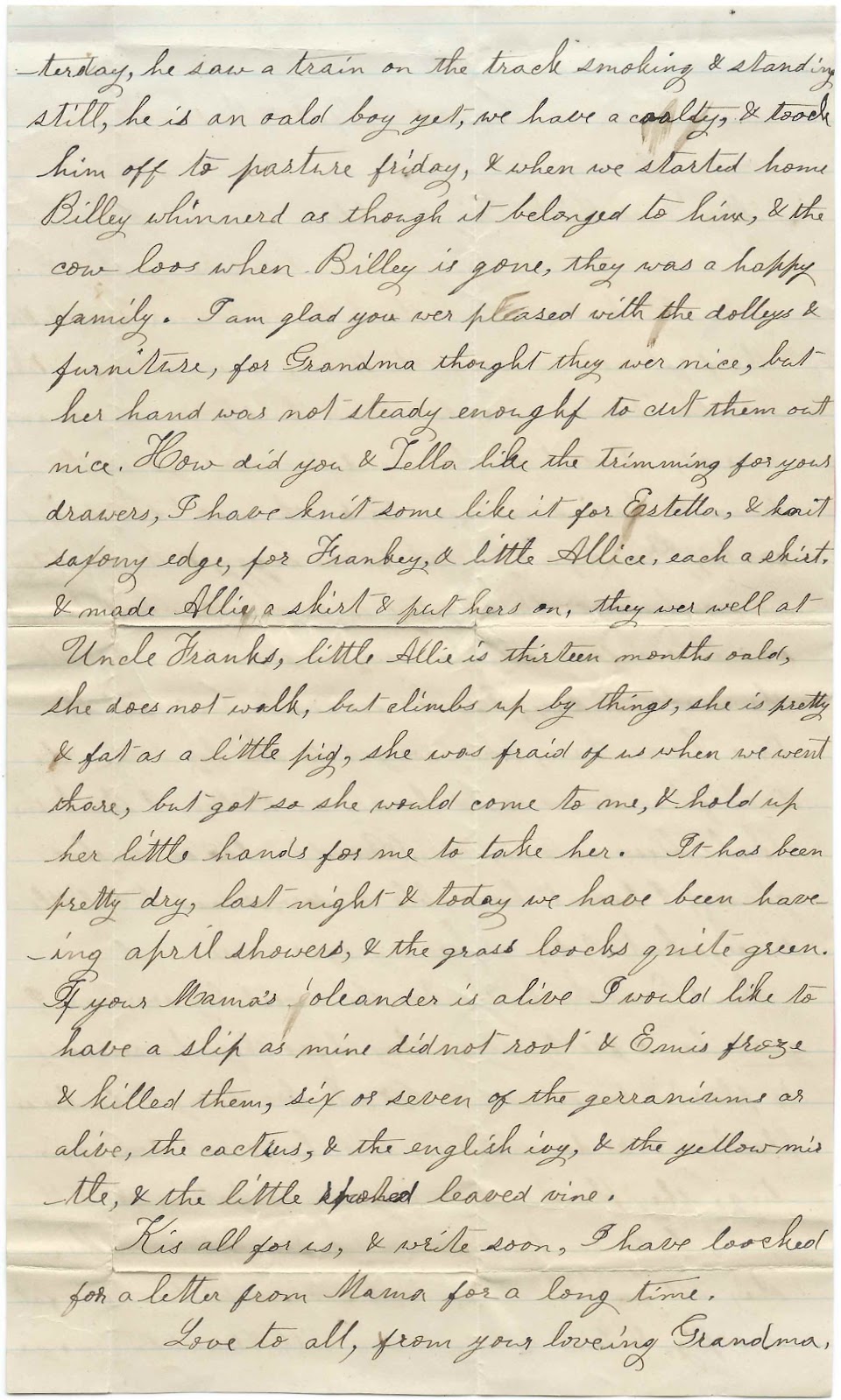 Rough transcript - with most of the original spelling

$50 for your Mama - [from] Grandfather
Larned, April 19, 1885
To Nettie Cheever
My Dear Little Granddaughter,
I suppose by this time, you think I did not think much of your dear letter, the first one you ever wrote to me, if so you are mistaken.  I think it very nice, but I can hardly see now to answer it.  I went to the Bend two weeks ago on the train to have some new teeth, the next day turned cold.  Grandpa came up in the buggy & the next day we went across the country to Uncle Frank's.  The wind was in our face all the way; we stayed there until the next Monday.  I sewed for Aunt Carrie all the time I was there, when we get to the big bridge the dust flew so we could hardly see Billey.  I think the alkaly flew into my eyes (Grand-pa had on smoked glasses).  I haven't been able to sew, or read, but little since, what I do, makes my eyes worse.

Aunt Emi thinks she has the nicest boy ever was.   I guess he is pretty nice, they have their house ready to plaster tomorrow.  Uncle Joe has got his house plastered & are downstairs, but have not done painting, they have a new engrain carpet in the sitting room, have rented two rooms for a few months.  They all got the kisses you sent.  Billey is as fat as a pig & tried to runnaway with Grand-pa & and me yesterday, he saw a train on the track smoking & standing still, he is an oald boy yet, we have a coalty & took him off to pasture Friday, & when we started home Billy whinnied as though it belonged to him, & the cow loos [lows?] when Billey is gone, they was a happy family.  I am glad you were pleased with the dolleys & furniture, for Grandma thought they were nice, but her hand was not steady enough to cut them out nice.  How did you & Tella [Nettie's sister Lutella Anna Cheever] like the trimming for your drawers.  I have knit some like it for Estella, & knit saxony edge, for Frankey, & little Alice, each a shirt, & made Allie a shirt & put hers on.  They were well at Uncle Frank's, little Allie is thirteen months oald.  She does not walk, but climbs up by things, she is pretty & fat as a little pig, she was fraid of us when we went there, but got so she would come to me & hold up her little hands for me to take her.  It has been pretty dry, last night & today we have been having April showers, & the grass looks quite green.  If your Mama's oleander is alive, I would like to have a slip as mine did not root & Emi's froze & killed them, six or seven of the geraniums are alive, the cactus, and the english ivy, & the yellow mistle, & the little specked leaved vine.
Kiss all for us, & write soon.  I have looked for a letter from Mama for a long time.
Love to all, from your loving Grandma.

Nettie Maxson Cleever was born September 24, 1872 at Tarkio, Iowa, the daughter of Francis Appleton Cheever, an Ohio native, and Flora Adelia (Maxson) Cheever, who was born in New York.  Nettie's paternal grandfather, Daniel Cheever III, had died in 1877, and his wife Anna Judson (Appleton) Cheever had recently died in February 1885.  Therefore, it was presumably Eliza Ann Melissa (Kellogg) Maxson who penned the letter; "Grandfather" was her husband Thomas Rix Maxson.

It appears that Nettie was married twice; first, to Carroll Bower, whom she married on November 3, 1897 at Emporia, Kansas.  They had a daughter Leone, born in 1898.  The marriage apparently ended in divorce, and Nettie then married Ira Eugene Myers on May 8, 1906 at Turon, Kansas.  They had, I believe, three children, Robert Eldon Myers; Thomas Rix Cheever Myers; and Ruth Adella Myers.

Nettie Maxson (Cheever) Myers died in 1932 and is buried in Burr Oak Cemetery at Athens, Michigan.

Posted by Pam Beveridge at 1:29 PM