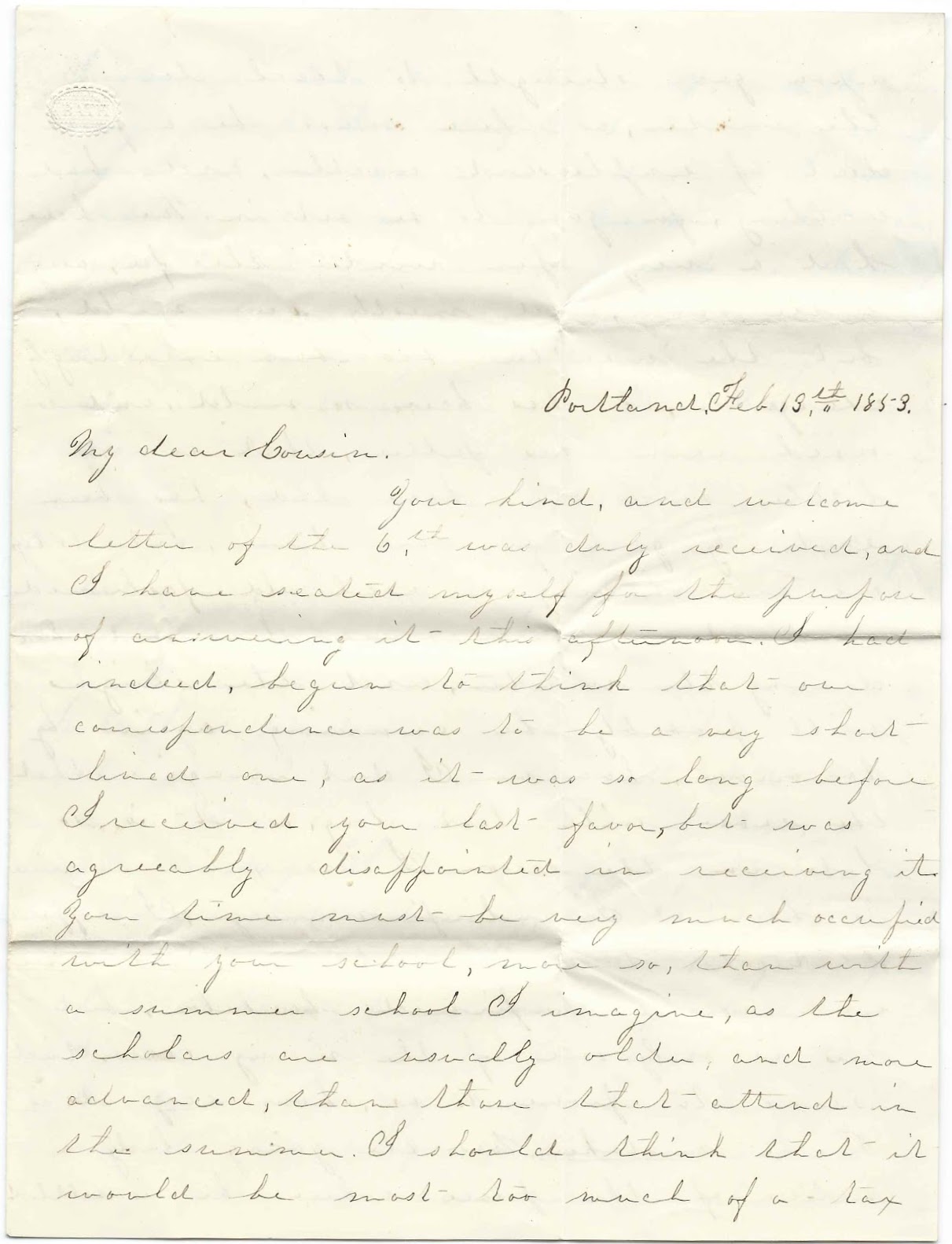 February 13, 1853 letter from Annette at Portland, Maine, to her cousin.  From clues in the letter, it appears that Annette was Annette Maria Dearborn; her cousin was presumably Almira Augusta Daggett of Greene, Maine.  More images and a transcription appear at the end of this post.

No surnames were given in the letter but the given names mentioned were unusual enough that an identification of all involved could be teased out.  Those names, in order of appearance: Cousin; Greenlief; Converse; Aunt Dorcas; Emily; "little Romeyn"; Grandfather; Annette.

The differences in tint in the images below are due to scanning with and without the scanner lid.  The first and fourth images are true. 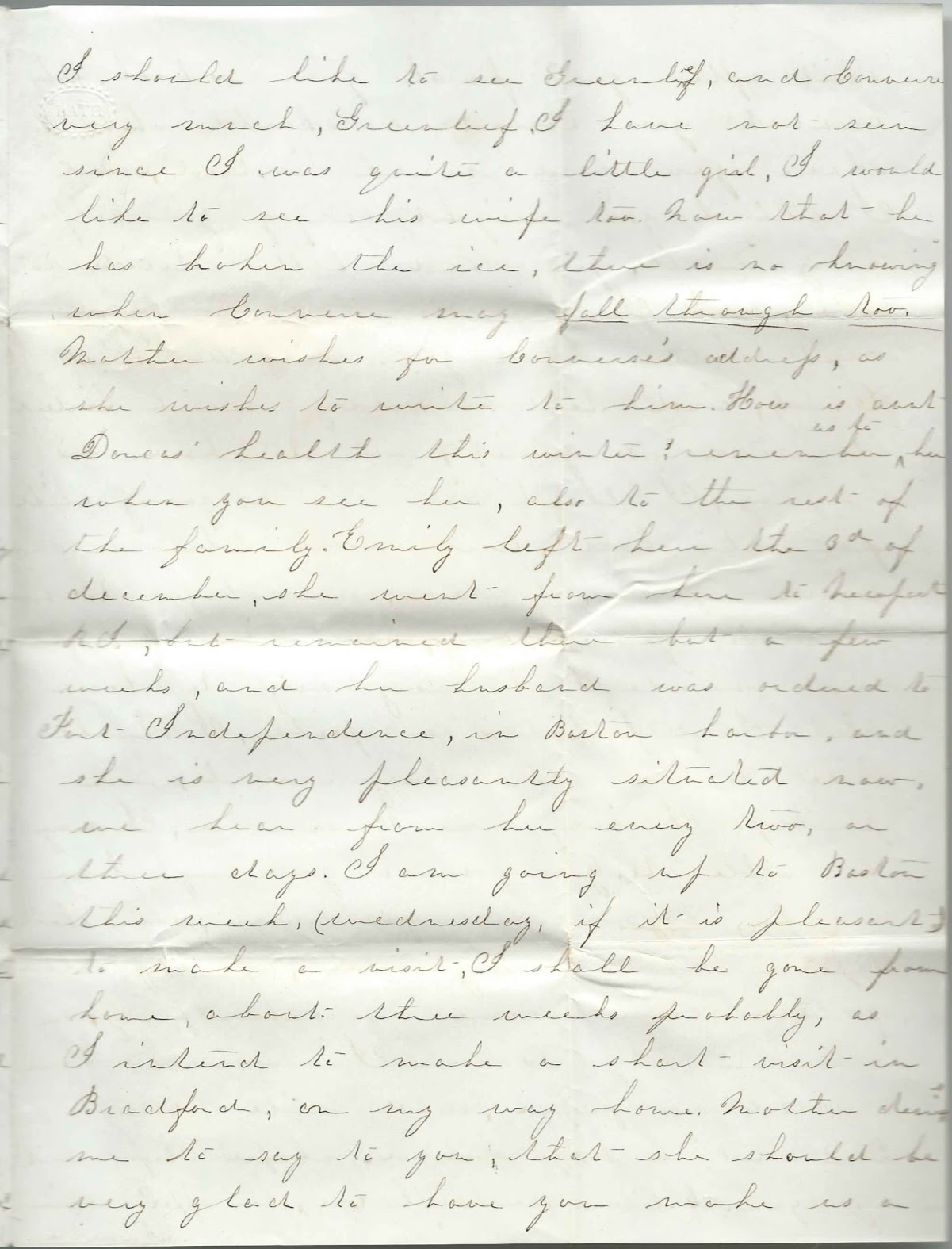 Portland, February 13, 1853
My dear Cousin,
Your kind, and welcome letter of the 6th was duly received, and I have seated myself for the purpose of answering it - this afternoon.  I had indeed begun to think that our correspondence was to be a very short-lived one, as it was so long before I received our last favor, but was agreeably disappointed in receiving it for time must be very much occupied with your school, more so, than with a summer school I imagine, as the scholars are usually older, and more advanced, than those that attend in the summer.  I should think that it would be most too much of a tax upon your strength, to teach during the winter, as there must be a good deal of unpleasant weather, and bad walking, for you to be out in.   We have had a very open winter thus far, very little snow, and mostly very mild, but the weather has been exceedingly changeable, it has been so mild, and so much rain has fallen, that what little snow we have had, has been entirely gone for some time, but today we are having a real old fashioned snow storm, such as we have not had during the winter, and the sleigh will probably be running again by tomorrow.  However, I don't imagine that the snow will last long, as it is so late in the season.  I was quite surprised to hear of Greenlief's marriage [Dr. Greenlief Dearborn Quincy Adams Daggett (1818-1857)].  I supposed that he had passed the critical time and was a confirmed bachelor, but this is only one of the many cases, that serve to prove to us, how easy it is to be mistaken.  Was the young lady a native of the place where he is settled?  [She was Rachel M. (Roberson) Daggett Hunt (1832-1904) of New Jersey.]  I should like to see Greenlief, and Converse [Converse Rollin Daggett (born 1820)] very much.  Greenlief I have not seen since I was quite a little girl.  I would like to see his wife, too.  Now that he has broken the ice, there is no knowing when Converse may fall through too.  [Converse Rollin Daggett married Anna F. Packard Bailey (1845-1914) about 1871].   Mother  wishes for Converse's address, as she wishes to write to him.  How is Aunt Dorcas' health this winter?  [Dorcas Christina (Dearborn) Daggett, sister of Almira (Dearborn) Daggett, who was the mother of Dr. Greenlief Dearborn Adams Quincy Daggett and Converse Rollin Daggett; after Almira died, Dorcas married her sister's widower,  Aaron D. Daggett.]  Remember us to her when you see her, also to the rest of the family.  Emily left here the 3rd of December.  [Annette's sister Emily Louise Getty (Dearborn) Ayres, wife of Gen. Romeyn Beck Ayres and mother of little Romeyn, born 1851 and, sadly, died 1854.]  She went from here to Newport, Rhode Island but remained there but a few weeks, and her husband was ordered to Fort Independence in Boston Harbor, and she is very pleasantly situated now.  We hear from her every two or three days.  I am going up to Boston this week, (Wednesday, if it is pleasant) to make a visit.  I shall be gone from home about three weeks probably, as I intend to make a short visit in Bradford [Massachusetts, where Annette is shown on the 1850 Census] on my way home.  Mother desires me to say to you, that she should be very glad to have you make us a visit after you finish your school.  Why cannot you come!  We should like to have you very much indeed, and I think you might enjoy yourself very well.  You had better decide to come, and I hope to hear in your next letter that you will.  We miss Emily, and the baby very much indeed.  It seems so quiet, not to have his company.  I think we miss a young child from the house, even more than a young person.  However, we hope to have a visit from Emily, and little Romeyn next month.  I am very sorry to hear that Grandfather is so feeble. [Grandfather was Simon Dearborn (1760-1853), who died just months after the date of this letter.]   I should like to see him very much, and perhaps I may next summer.  I may be able to.  You must give my love to the boys when you write; we shall depend upon seeing them, if they either of them come home in the spring, or whenever they do come.  I seem to have covered my paper, and will close.  Don't let so long a time elapse before writing again.  Believe me with love, your affectionate cousin Annette.