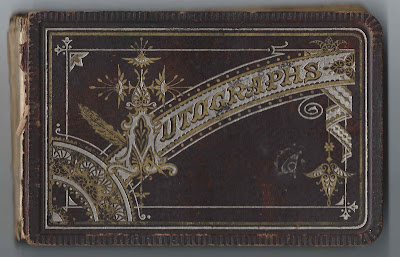 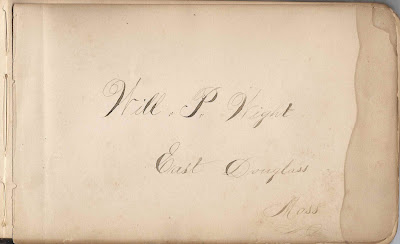 The album is approximately 7-1/2" x 5" and contains the sentiments of over thirty of Will's relatives and friends in Maine, New Hampshire and Massachusetts.

Will P. Wight, or William P. Wight, was born about 1857 in either Nova Scotia, New Brunswick or Hingham, Massachusetts, depending on the differing information on records.  He was the son of Jesse D. Wight and Eunice Aurelia (Riley) Wight, who were born at Otisfield, Maine, and Ardize Hill, Nova Scotia, respectively.

Either Eunice alone or her family had moved to the Hingham, Massachusetts, area, where Eunice was living at the time of her marriage to Jessie D. Wight.  Jesse was working as a blacksmith there or at Otisfield, Maine. 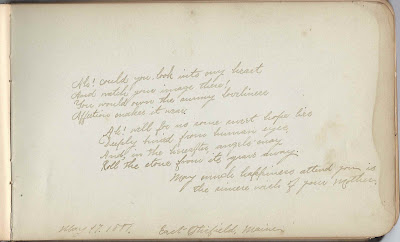 Will's brother David H. Wright signed a page near the front of his album. 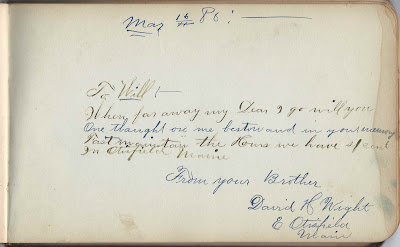 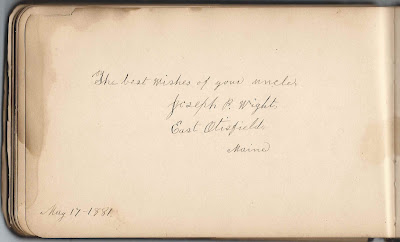 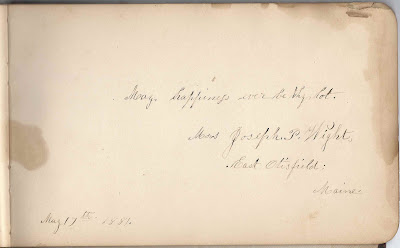 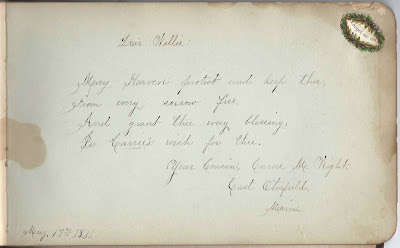 In the 1880 Census, Will P. Wight was living in the home of his parents at Otisfield, Maine, but apparently soon after he moved to East Douglas, Massachusetts, where he was living at the time he started compiling autographs in his album.

Shortly after his arrival in Massachusetts, apparently, he married Harriet Simpson, who was born about January 1858 in Massachusetts.  I found a birth record for a Jesse E. Wight, born to Will and Hattie, on 21 October 1882 at East Douglas, Massachusetts.

If you have corrections and/or additions to the information above, or information on any of the signers mentioned below, please leave a comment or contact me directly.  Thanks!