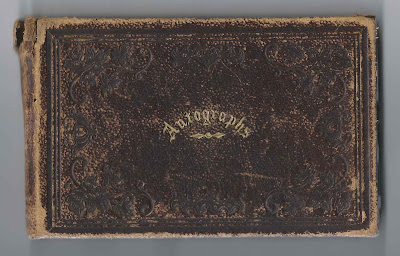 Although this was not the first signed page in the album, it was fairly close to the front and may have been penned by the album owner. 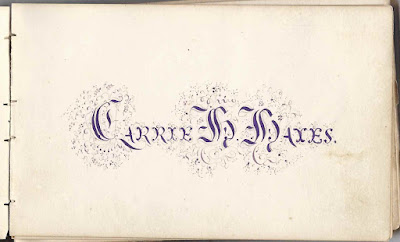 The album measures approximately 5-1/2" x 3-1/4" and contains the sentiments of nearly 70 of Carrie's relatives, teachers, friends and schoolmates, as well as two Norwich University presidents and many students from there.

Carrie Hortense Hayes was born 15 May 1855 at Barton, Wisconsin, the daughter of Dr. Asa Hinckley Hayes and Josephine Maria (Foster) Hayes.  I believe it was this Asa H. Hayes who was the surgeon with Company S of the 16th Wisconsin Infantry during the Civil War.

The June 8, 1865 issue of the Janesville Gazette mentions the recent death of Dr. Asa H. Hayes on "Thursday last."  It also notes that Dr. Hayes was an old and respected citizen of Barton.  This is a bit concerning because Dr. Hayes would have been only in his 40s, but perhaps the Civil War aged him considerably.

But I had suspected that Dr. Hayes had died because by the time of the 1870 Census, Carrie and her mother Josephine were back at Northfield, Vermont, in the household of Josephine's parents Leander and Abigail (Drew)Foster.

Leander and Abigail inscribed facing pages in Carrie's album.  Leander included his birth date and age: "Born Feb 25th 1803 Aged 65 years".  He wrote his page at Northfield, Vermont, on May 24, 1868. 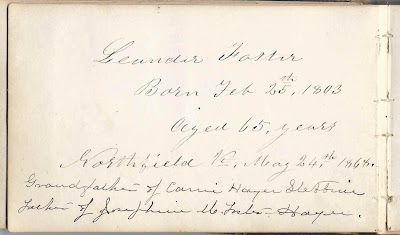 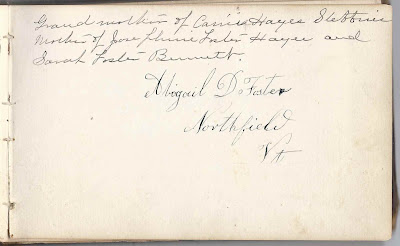 Leander was included in a book entitled "Centennial Proceedings and Historical Incidents of the Early Settlers of Northfield, Vt., with Biographical Sketches of Prominent Business Men Who Have Been and Are Now Residents of the Town", published two years after the town's centennial year, by Hon. John Gregory in 1878. 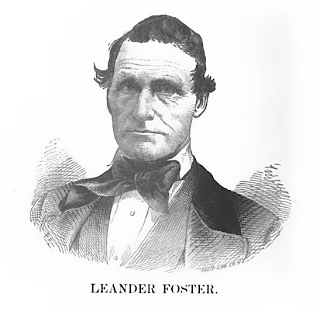 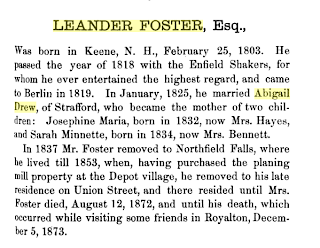 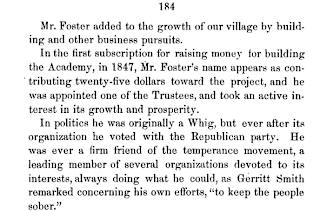 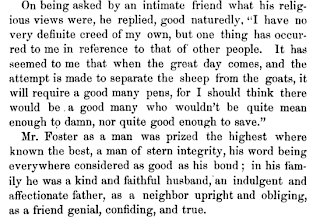 On 19 May 1875 at Northfield, Vermont, Carrie Hortense Hayes married Edwin Strong Stebbins, son of Anson and Adeline Ezoa (Strong) Stebbins.  They had three sons, the youngest of whom, Kenneth Foster Stebbins, wrote in his mother's album when it apparently came to light long after most of the other signers had signed in it. 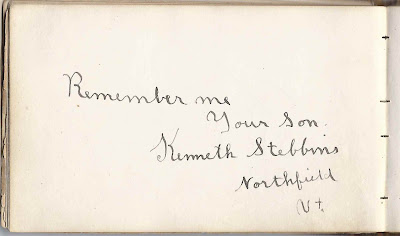 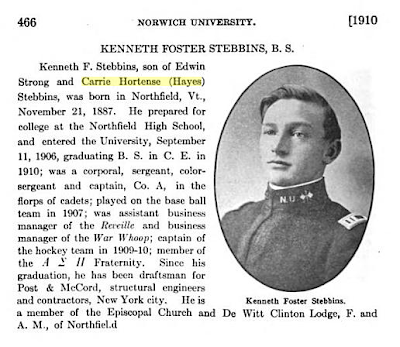 Edwin Strong Stebbins died in 1892.  Carrie lived until 1943.  If you have corrections and/or additions to the information above, or information on any of the signers listed below, please leave a comment or contact me directly.  Thanks!

Most of the information on the signers with a connection to Norwich University comes from "Norwich University, 1819-1911: her History, her Graduates, her Roll of Honor", published in three volumes by Major-General Grenville M. Dodge and edited and compiled by William Arba Ellis, and alumni publications.

Two of the signers were presidents of Norwich University.  Roger Strong Howard signed a page on December 7, 1869. 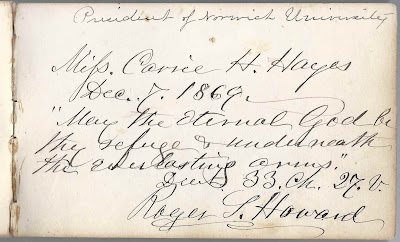 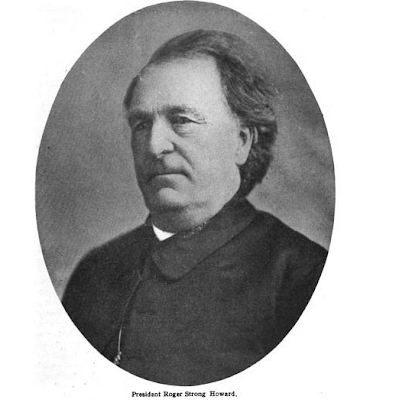 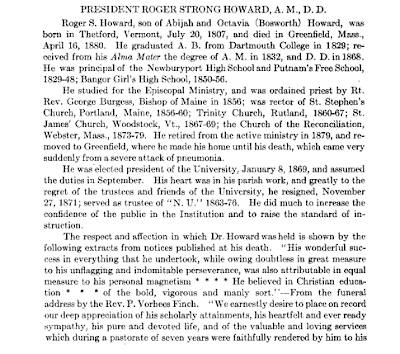 The other person with the notation that he was a president of Norwich University was Edward Bourns, who signed at Northfield, Vermont, in November 1869. 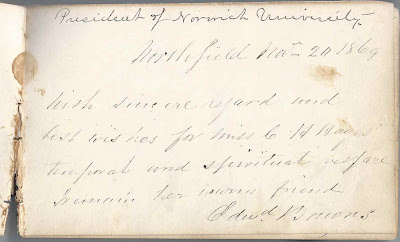 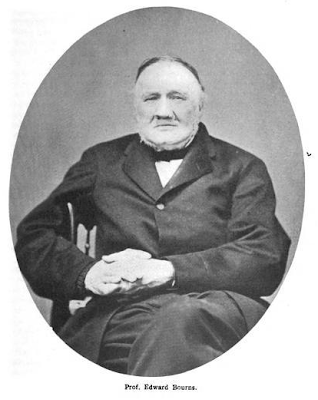 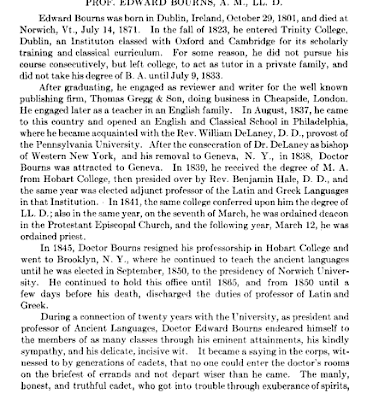 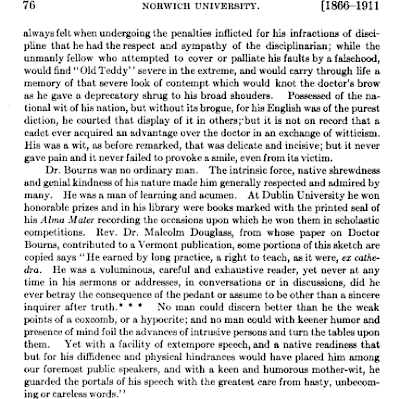 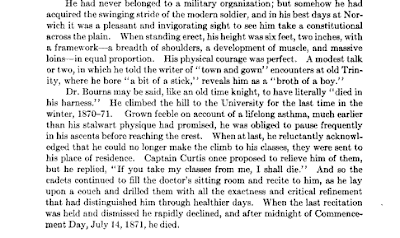 A. L. Sheldon of Rutland, Vermont, signed a page at Norwich University and indicated he was in the Class of 1873.  He was Archie Lorenzo Sheldon. 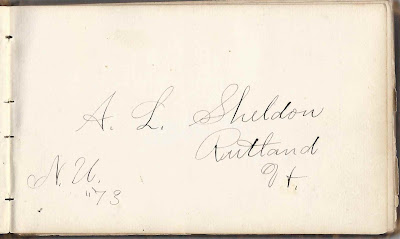 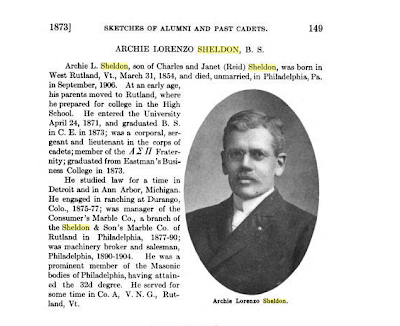 Ed. W. Sawyer of Woburn, Massachusetts, signed a page at "Northfield Institution" on April 11, 1870.  He was Edward Warren Sawyer. 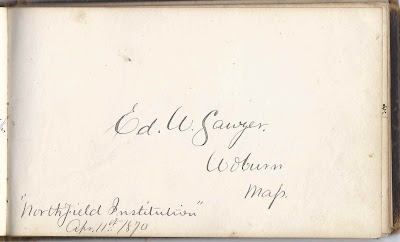 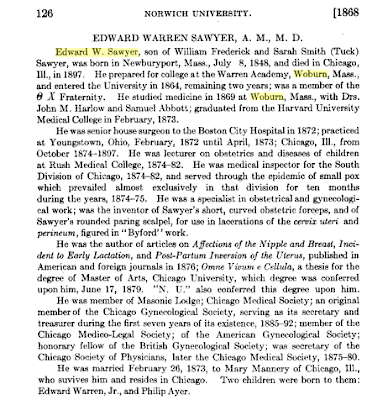 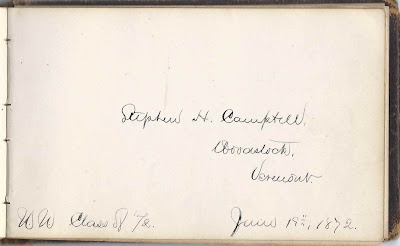 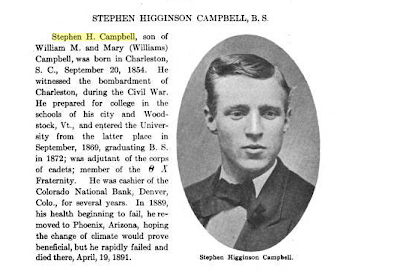 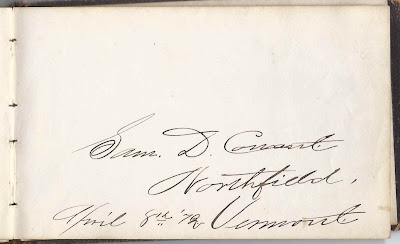 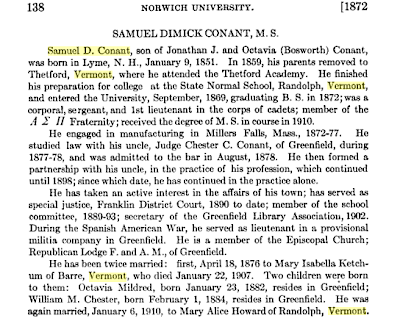 Charles G. Griffith of Brooklyn, New York, signed a page at Norwich University and indicated he was in the class of 1872.  He was Charles Greenleaf Griffith. 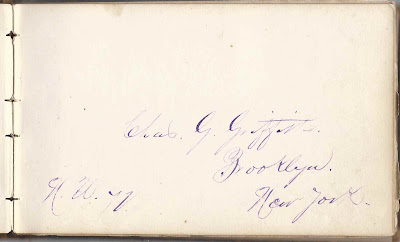 Another signer was Rev. J. B. Pitman of Swanton, Vermont.  He was Rev. John B. Pitman, born at Bath, England about 1825; he came to the United States at about age 9.  After graduating from Rochester University and Burlington Seminary, he ministered to churches in Vermont, New York and Ohio.  He married Mary A. Cady, daughter of Deacon Calvin and Betsey (Merrill) Cady of Northfield, Vermont. 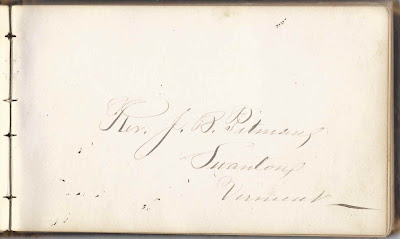 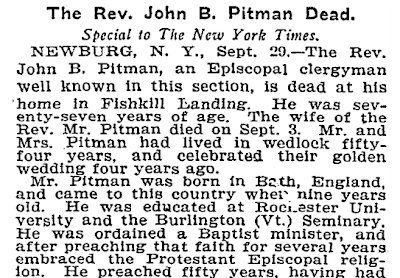 One of the signers, Sarah H. Kimball of Northfield, Vermont, was a sister to a Ladella Calista Kimball, whose autograph album was featured in an earlier post.   She signed on March 23, 1871. 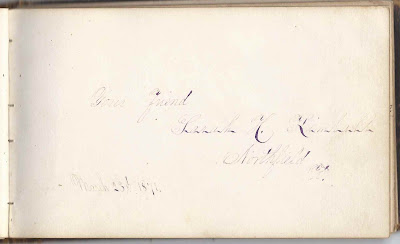 Sarah signed in her sister's album as Sarah H. H. in 1880, reflecting that fact that she had since married James Henry Hazelton.

Posted by Pam Beveridge at 3:56 PM