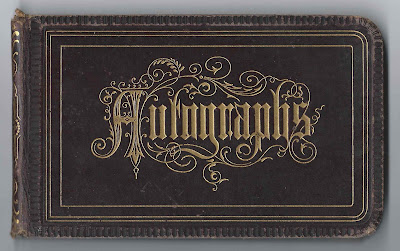 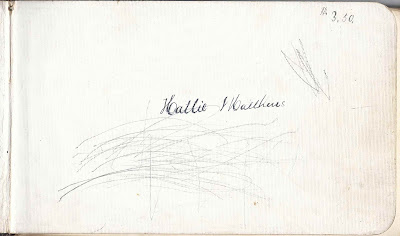 The album is approximately 7" x 4-1/4" and contains the sentiments of 32 of Hattie's relatives, friends, classmates and teachers.  An alphabetical list of the signers appears at the end of this post.

Harriet Holmes Matthews, "Hattie", was born about December 1870 at, I believe, Hampden, Maine, the daughter of Samuel Worcester Matthews and Mary A. (Webb) Matthews.  Samuel's father, Asa Matthews, came to the Hampden area from Searsport, Maine, to become principal of Hampden Academy.

I haven't found much on Hattie's mother Mary A. (Webb) Matthews, except that there was a Mary A. Webb living in the household of Daniel and Abby Stone in the 1850 Census of Hampden, Maine.

One of Hattie's grandmothers, possibly her paternal grandmother, Maria Shaw (Lane) Matthews, inscribed a page in the album, at Hampden, Maine, in August 1880.  Maria lived until 1895. 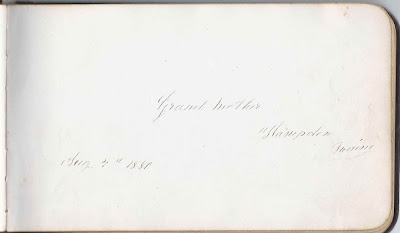 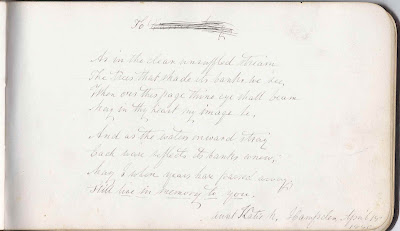 About 1879, Samuel Worcester Matthews took his family to Caribou, Maine, where he opened a law practice and eventually started a newspaper, the Aroostook Republican, that is still published today.

The 2013 Aroostook edition of Discover Maine magazine carried an article by Charles Francis about Samuel Worcester Matthews on pages 48 and 49.

In 1887, Samuel Worcester Matthews was appointed the Commissioner of the Maine Bureau of Labor and Industrial Statistics at Augusta, Maine.

I'm wondering if Hattie Holmes Matthews was the Hattie H. Matthews who was a member of the Capitolian Trio of Augusta, Maine.  It seems logical that, even though the Worcesters maintained their Caribou home, the family would relocate to Augusta, especially since Matthews put in long hours at his new position. 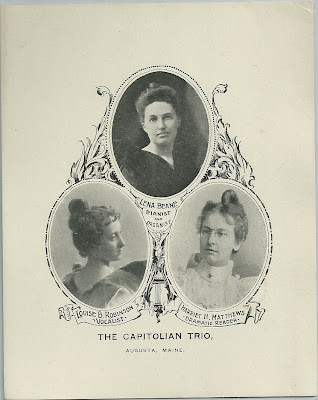 If so, perhaps the sheet tucked in the album, on letterhead of the Golden Lion Hotel at Straford-on-Avon, was the basis of one of Hattie's dramatic readings. 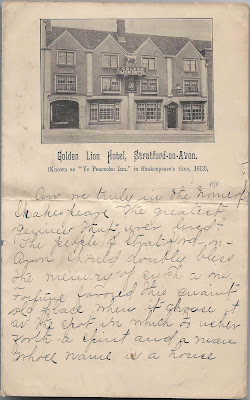 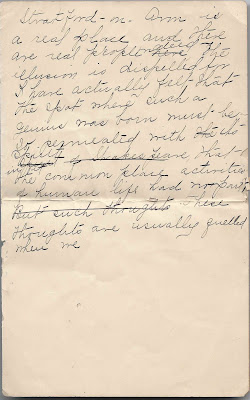 Sherman was an educator and school superintendent who held positions at Springfield, Massachusetts; New Haven, Connecticut; Brunswick, Maine; Mexico, Maine, among others.  The couple had, I believe, two children, a son and a daughter.

One of Hattie's teachers at Caribou, Maine, was Will S. Payson of Castine, who signed at Caribou on January 15, 1884.  He had married Abbie L. Davis of Castine on May 27, 1883.  The son of Darius Augustus Payson and Mary Eliza (Hobbs) Payson, he eventually turned to a career in dentistry. 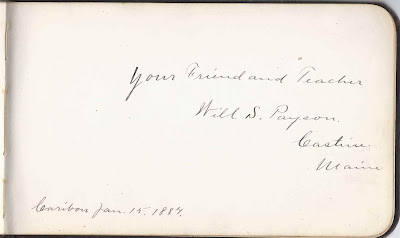