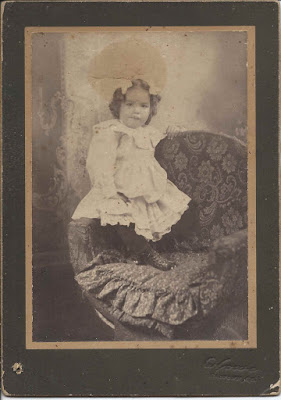 Late 1800s/early 1900s photograph of a young girl identified as Alice Mae Smith.  The photograph was taken by the Howe studio of Old Town, Maine. 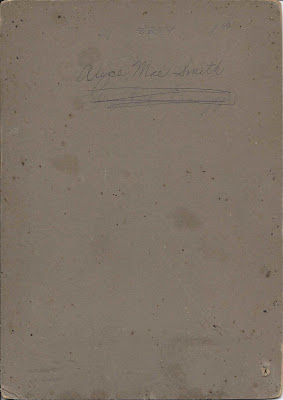 I didn't find an Alice Mae Smith in Penobscot County, Maine, during the time period.

There were several possibilities for an Alice M. Smith who lived in the Old Town, Maine, area.  Of course, it's possible that Alice lived elsewhere and happened to have her photograph taken while her family was visiting relatives.

A possible clue to Alice's identity might be that there's a name crossed out under hers.  It looks like Gertie Briggs or Gustie Briggs.

There's an Alice M. Smith who was born about 1900 in Maine, in the 1910 Census of Old Town, Maine, living with a couple I believe are her mother and stepfather, Annie and Arthur Crosby.

There are two instances of an Alice M. Smith in the Maine Marriages Online database, from Old Town or nearby:


There are a few other instances of an Alice M. Smith born in the 1880s and 1870s, but I've assumed, perhaps erroneously, that the photograph was from a later period.


If you recognize Alice from your family photographs or research, please leave a comment or contact me directly.  Thanks!

Posted by Pam Beveridge at 4:44 PM