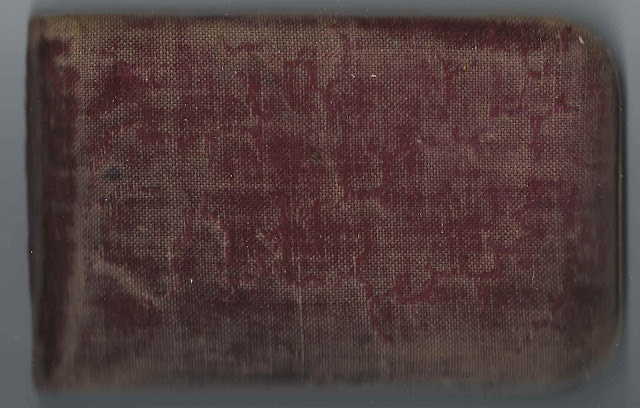 [Note: this post was updated in December 2013 to reflect the fact that more of the album pages were located.]

Autograph album that was presented to "Georgie", Georgia E. Harvey, by her friend Cassie A. Brehaut on 24 December 1890. 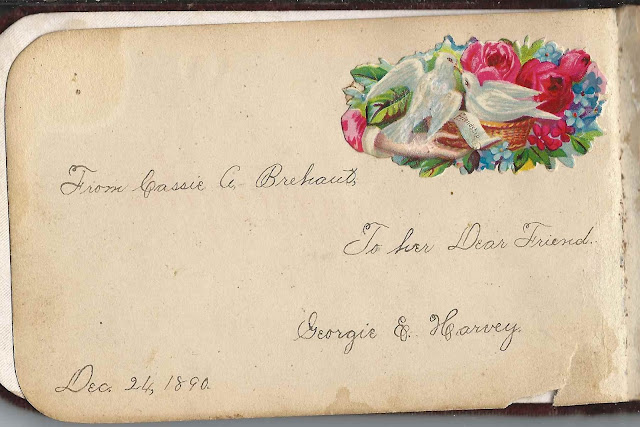 The album is approximately 6" x 4" with puffy red velvet covers and the sentiments of nearly 70 of Georgie's relatives and friends from Maine and New Brunswick.  An alphabetical list of the signers appears at the end of this post. 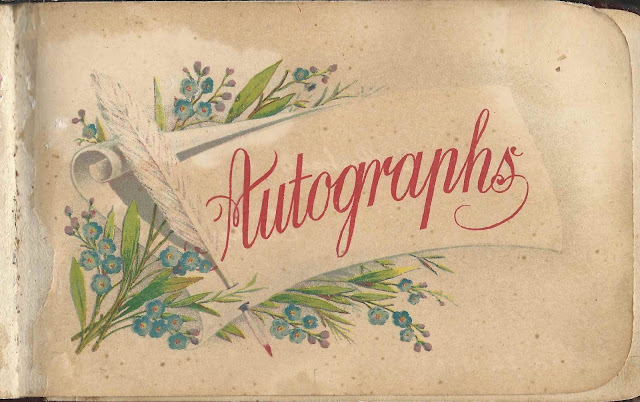 Georgia E. Harvey, "Georgie", was born at Winn, Maine, about 1881, the daughter of Francis and Julia A. (Brown) Harvey, who were born at Saint John, New Brunswick, and Enfield, Maine, respectively.

Presumably the signer below, Julia Harvey, was Georgie's mother Julia A. (Brown) Harvey. 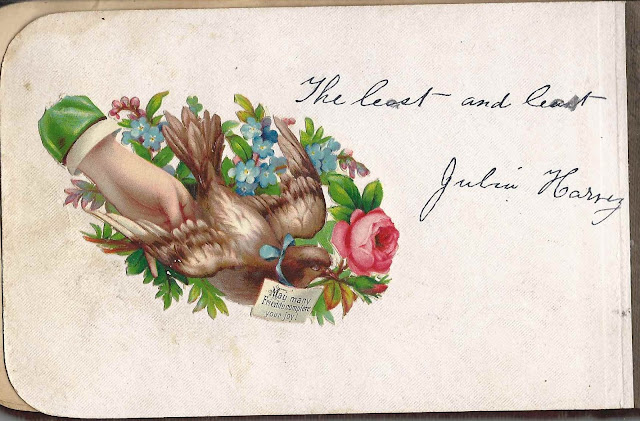 I don't have information on Georgie's father Francis Harvey, other than that I believe he was born in Saint John, New Brunswick. 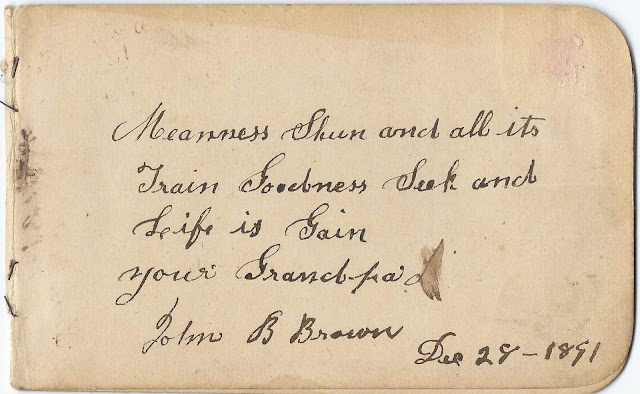 I believe Lorana had died by the time Georgie started compiling her album.  John married Electa L. P. (Dunbar) Witham in 1875.  Electa and former husband George W. Witham had divorced in 1872.  Electa signed a page on December 28.  Someone later penciled in 1890, which may have been in error, as her husband John B. Brown signed on December 28, 1891.] 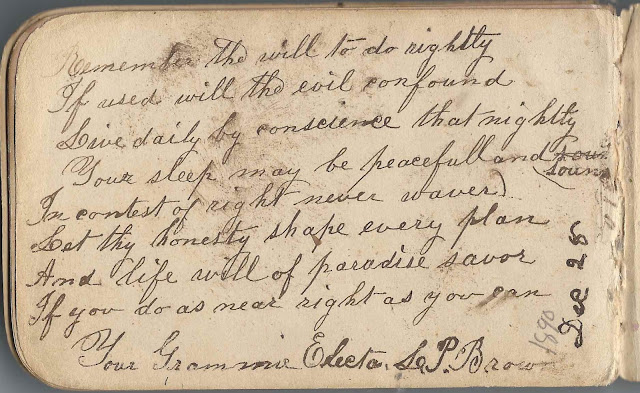 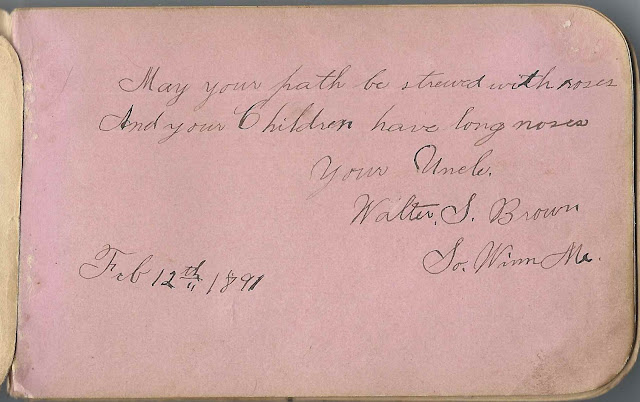 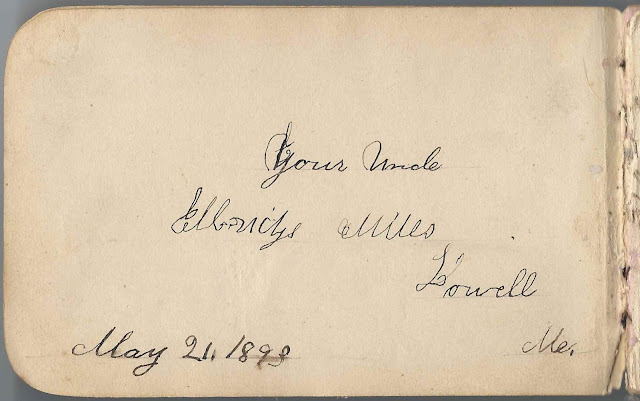 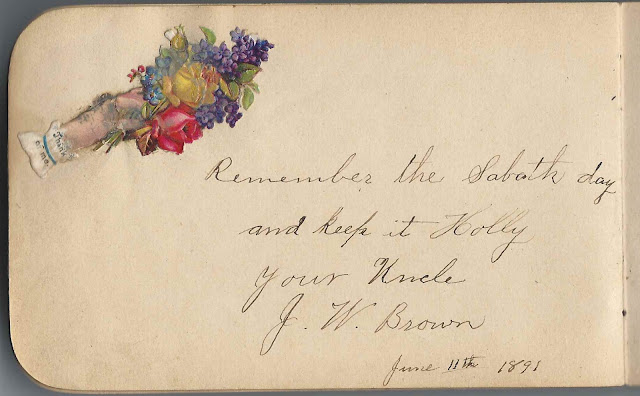 Georgie's cousin Dellie Folsom, or Delia V. Folsom, signed a page at Winn, Maine, on April 5, 1891.  She pasted a Victorian scrap over her name. 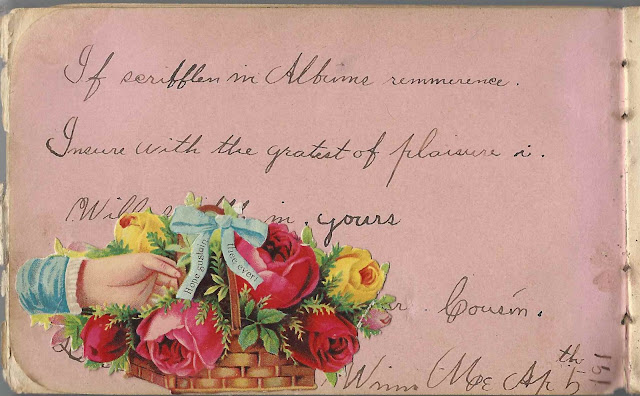 On 10 November 1902, Georgie married Herman William Johnson.  According to their marriage record, he was the son of David and Isabel (Carle) who were natives of Dallas, Maine, presumably the township near Rangeley in Franklin County.  Herman was born at Dallas, Maine, about 1881.

[Note: a family member believes that the notations of Dallas on the marriage record are incorrect.  The family believes that Herman was born at Rollingdam, New Brunswick.]

Alphabetical list of the signers: [Note: given names within a specific surname may not be in alphabetical order.]