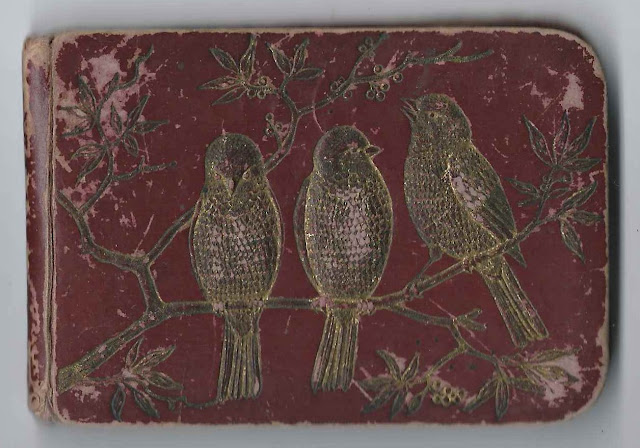 Note of May 8, 2014: A reader has forwarded photographs of Frances Emma (Darck/Durck) Westhoven and her mother Emily Jane (Shriner) Darck/Durck.  If you would like to connect with this reader, who is a descendant of Frances' paternal uncle Gideon Durck, please let me know. 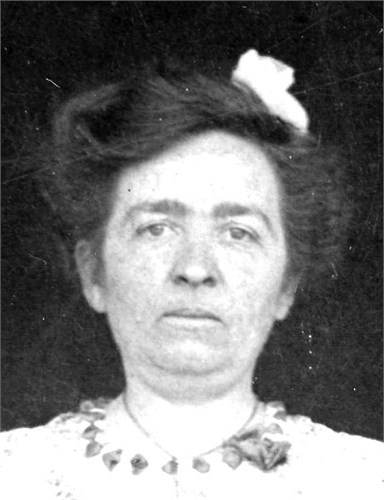 The album was presented to Frankie on Christmas Day in 1882 by
someone whose name I can't quite decipher.  There are three words, possibly Eron or Enon, Church and Braverman.  Two of the words could be Enon Church, as there was an Enon, Ohio, not far from Ada.  The friend's surname might have been Braverman. 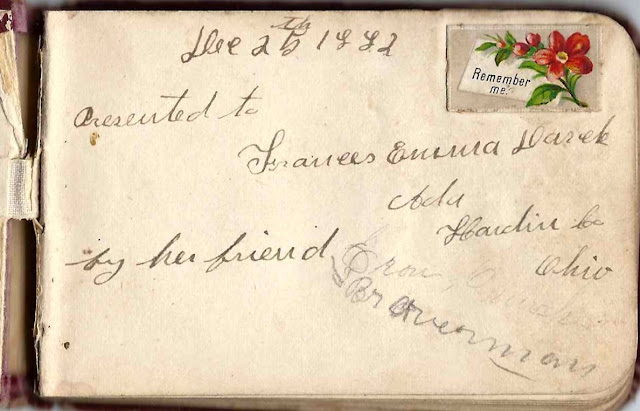 The album is approximately 3-3/4" x 2-3/4" and contains the sentiments of about 39 people, including Frankie herself, her husband and son, other relatives and friends. 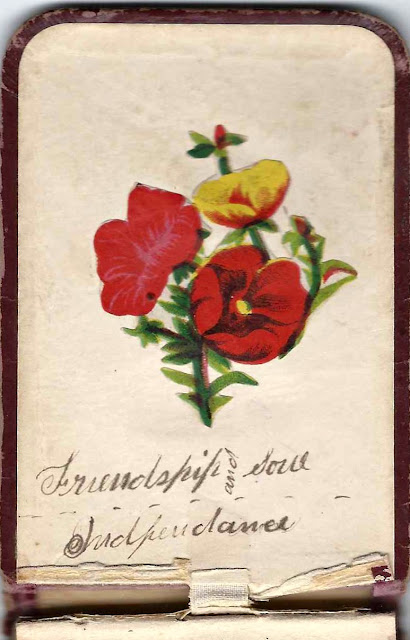 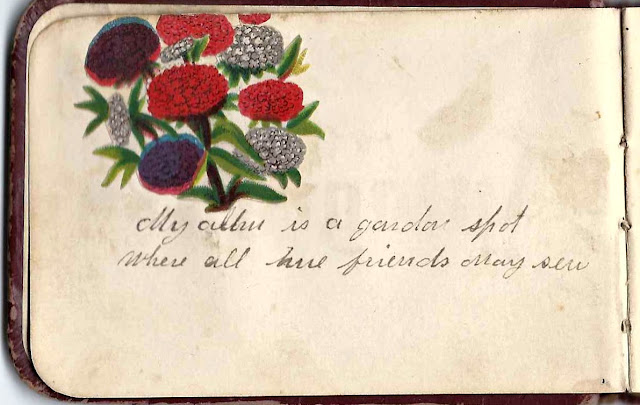 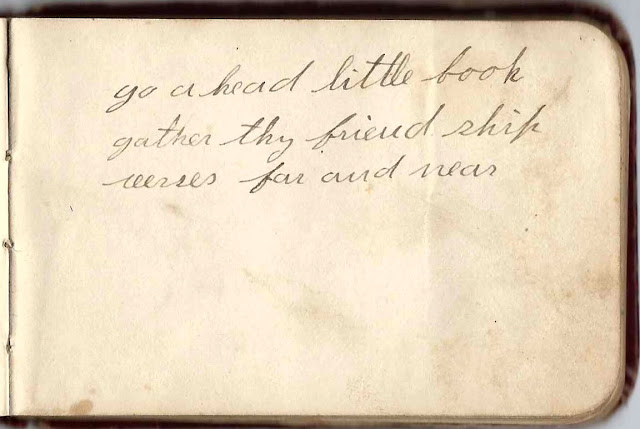 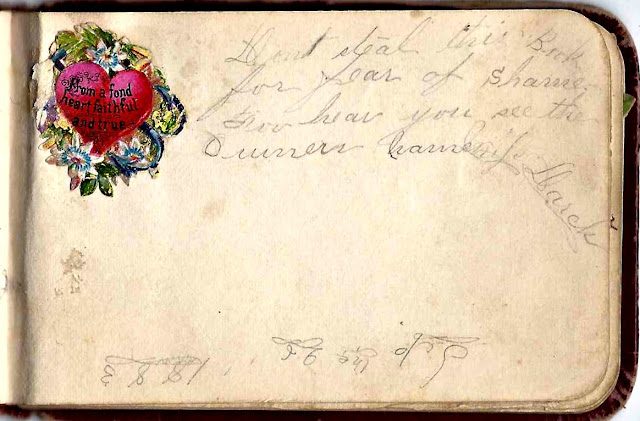 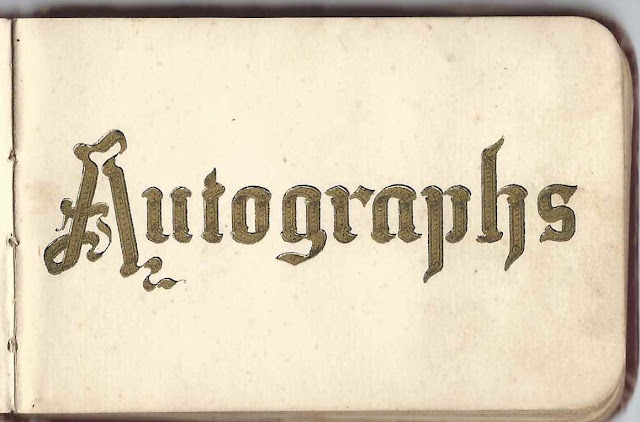 Frances Emma Darke was born about 1866 in Ohio, the daughter of Samuel O. Durck/Darke and Emily Jane (Shriner) Bolton Darck, who were born in Pennsylvania and Maryland, respectively.

Frankie had an older sister Almira Darck, born 22 February 1865. Sadly, Almira died 21 September 1882, a few months before Frankie received this album as a Christmas gift.  It must have been a bleak Christmas.

Two signers indicated they were Frankie's sister, and one indicated he was Frankie's brother.  Unfortunately, the two sisters didn't give a surname.  I don't know if these people were full siblings, half siblings, step siblings, siblings-in-law or fraternal or religious associates.

Alice signed a page at Wharton, Ohio, on 6 October 1883 and called herself "Your Sister Alice". 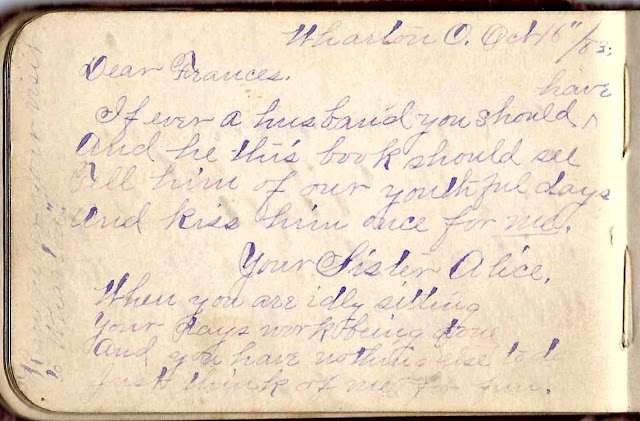 Sallie, who called herself "Sister", decorated her page with a Victorian scrap. 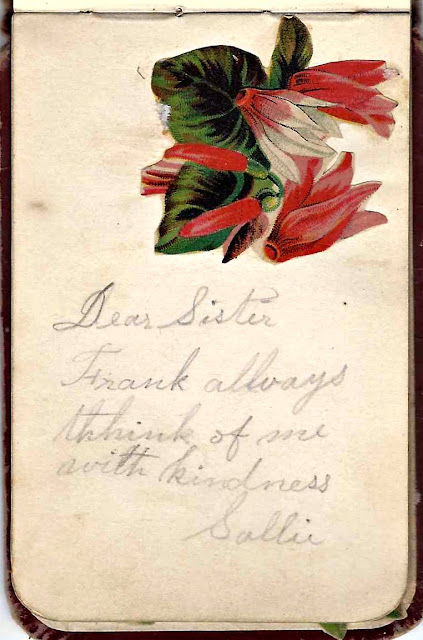 Charles H. Canan signed a page on 24 March 1883 and called himself Frankie's brother.  Interestingly, Charles at some point moved to California where he was a farmer/rancher, according to California Voter Registration records of Madera and Visalia.

According to a query I found online, whose author hasn't yet contacted me, Frankie and her son moved to California in the 1890s because they had relatives there. 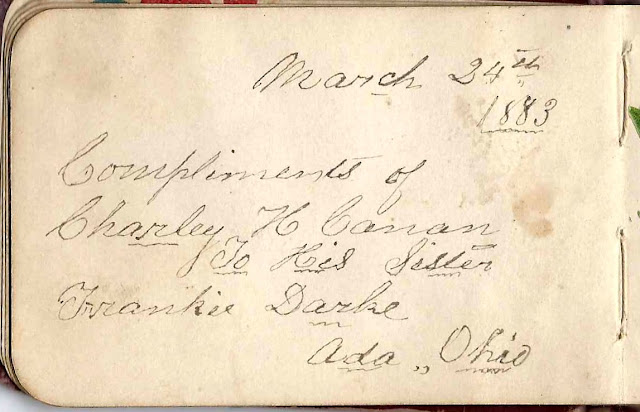 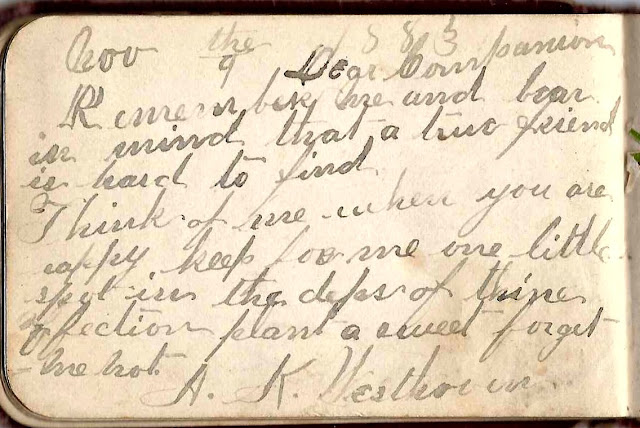 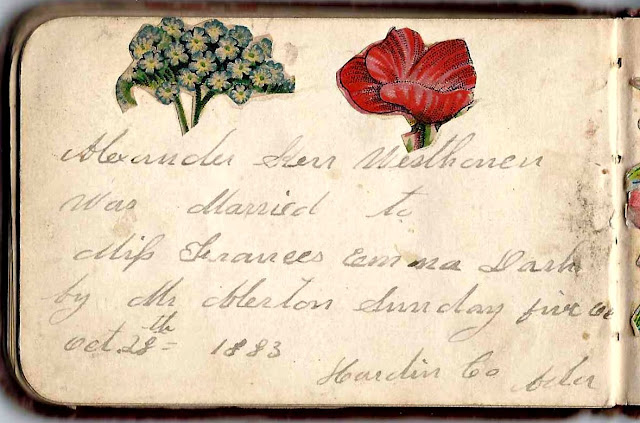 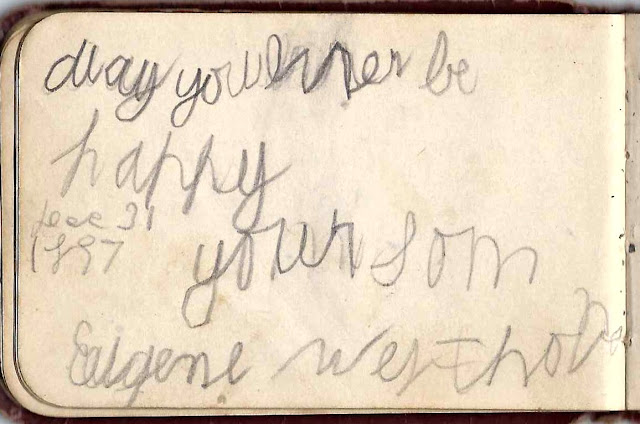 At some point, either Alexander died or the couple divorced.   Perhaps it was a divorce, as I found an Alexander K. Westhoven who married Emma Dora Lamphear [or variant spelling] on 17 April 1892 at Ada, Ohio.  He died in 1937.

As mentioned, Frankie and son Eugene moved to California, where they were enumerated at Visalia in the 1900 Census.  Frankie worked as a dressmaker.

Several people with the surname Osborn signed pages in Frankie's album.  They appear to have been siblings, and three of them called Frankie a cousin.

By researching them, I found that their mother was Susannah (Durck) Osborn, daughter of Samuel and Susannah (Ochs) Durck.  It seems likely that one of Susannah's brothers was Frankie's father.  One of them, Samuel O. Durck, married Emily Jane Schriner Bolton, who may have been Frankie's mother Emma.  In the 1870 census, Emma headed the household with daughters Almira and Frances and some people named Bolton, who may have been her children from a previous marriage.

At some point apparently, at least for one branches of the family, the Durck surname changed to Darck.

If you have corrections and/or additions to the information above, or information of any of the signers listed below, please leave a comment or contact me directly.  Thanks!

Alphabetical list of signers: [Note: given names within a specific surname might not be in alphabetical order.]