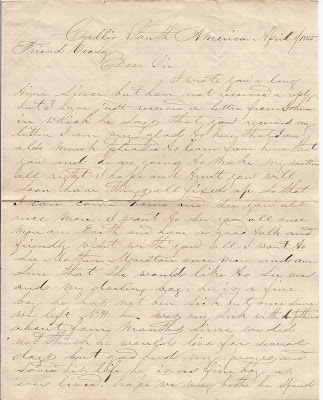 April 1, 1865 letter from P. H. B. in Callio, South America, to a person in New Hampshire, whose name I can't make out.  I don't know if "Friend" refers to a friend or to a Quaker friend.

The letter is bittersweet in that apparently Mr. P. H. B. left New Hampshire with his finances in a mess and is now hoping to make things right so that he can again visit his home, though he plans to return to South America. 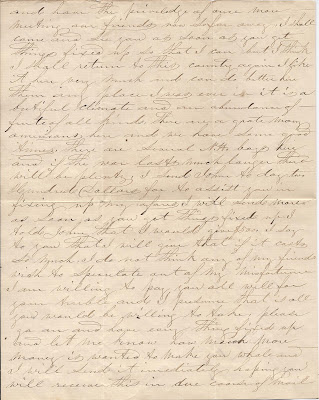 P. H. B. doesn't mention a wife but he speaks of his son, who had had a nearly fatal bout with diphtheria but had been in fine health since.

He mentions that Callio has many Americans living there, including some from New Hampshire, and he expects more to arrive if the war keeps on.  Does he mean that people have war fatigue and wish to escape service?  Or that the war was making commerce difficult so that some were leaving for better opportunities elsewhere?  The letter was written about two weeks before the assassination of President Lincoln. 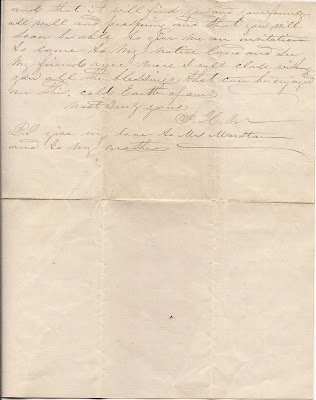 This letter was tucked into an autograph album owned by one of the daughters of General Henry P. Cotton, who was a prominent citizen of Lincoln County, Maine.  One of his daughters, Abbie Haley Cotton, married Rev. William Lermond Brown, but I don't know if Brown was the surname initial of the letter writer, P. H. B.

I wrote you a long time since but have not received a reply, but I have just received a letter from John in which he says that you received my letter.  I am very glad to here that.  I am also much pleased to learn from him that you and he are going to make my matters all right.  I hope and trust you will soon have things all fixed up so that I can come home and see you all once more.  I want to see you all once more on Earth and have a good talk and friendly visit with you all.  I want to see Mother Marstan once more and am sure that she would like to see me and my darling boy.  He s a fine boy.  He has not been sick but once since we left N. H.  He was very sick with diptheria about four months time.  We did not think he would live for several days but God herd my prayers and saved his life.  He is as fine boy as ever lived.  Hope we may both be spared and have the priveledge of one more meeting our friends now so far away.  I shall come and see you as soon as you get things fixed up so that I can, but I think I shall return to this country again.  I like it here very much and can do better here than any place I was ever in.  It is a beautiful climate and an abundance of frute of all kinds.  There are a grate many Americans here and we have some good times.  There are several N. H. boys here and if the war lasts much longer there will be plenty.  I sent John today two hundred dollars for to assist you in fixing up my afares.   I will send more as soon as you get things fixed up.  I told John that I would give $500.  I say to you that I will give that if it costs so much.  I do not think any of my friends wish to speculate out of my misfortune.  I am willing to pay you all well for your truble and I presume that is all you would be willing to take.  Please go on and have everything fixed up and let me know how much more money is wanted to make you whole and I will send it imediately.  Hoping you will receive this in due coarse of mail and that it will find you and your family all well and prospering and that you will soon be able to give me an invitation to come to my native land and see my friends once more.  I will close wishing you all the blessings that can be enjoyed on this cold Earth of ours.

P.S. Give my love to Mrs. Marstan and to my Brother


If you have any insights into the possible identity of the letter writer or recipient or into the issue of Americans residing at Callio, South America, in 1865, please leave a comment or contact me directly.