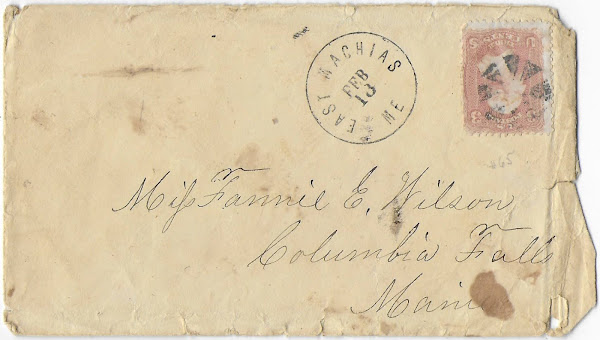 February 13, 1864 letter from Edna, presumably student or student/teacher, at Washington Academy in East Machias, Maine, to Miss Fannie Emily Wilson, who was teaching at Columbia Falls, Maine, and who had also attended or taught at Washington Academy.
A lively letter, full of school gossip and goings-on.  A transcription appears at the end of this post. 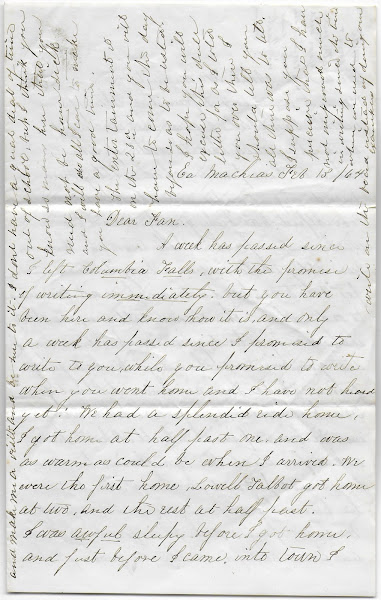 Mentioned in the letter - Teachers and Students.  If you can identify people, correct mistakes and/or share information on any of the people below, please leave a comment for the benefit of other researchers
* In the event that Edna was actually Edna Pope (1849-1865)), read more about her parents Samuel Ward Pope and Betsey (Jones) Pope and their family in A History of the Dorchester Pope Family. 1634-1888, pages 243-247 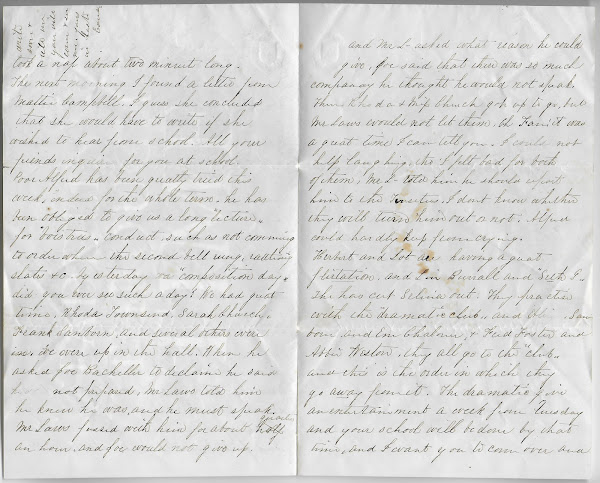 For some reason, Edna felt it necessary to write sideways on the front and interior panes but left the back pane blank. 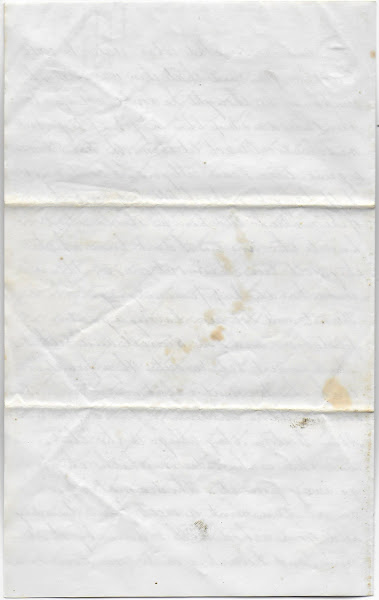 Transcription - please leave a comment if you spot errors and/or can fill in the blanks:
Ea. Machias Feb 13/64
Dear Fan
A week has passed since I left Columbia Falls, with the promise of writing immediately, but you have been here and know how it is and only a week has passed since I promised to write to you, while you promised to write when you went home and I have no heard yet. We had a splendid ride home. I got home at half past one, and was as warm as could be when I arrived. We were the first home. Lowell Talbot got home at two and the rest at half past.
I was awful sleepy before I got home and just before I came into town I took a nap about two minutes long. The next morning I found a letter from Mattie Campbell. I guess she concluded that she would have to write if she wished to hear from school. All your friends inquire for you at school. Poor Alfred has been greatly tried this week, indeed for the whole term. He has been obliged to give us a long "lecture" for "boistrus" [sic] conduct, such as not coming to order when the second bell rung, rattling slates, etc. Yesterday was "composition" day & did you ever see such a day? We had great time. Rhoda Townsend, Sarah Church, Frank Sanborn and several others were in. We were up in the hall. When he asked Joe Bacheller to declaim he said he ____ [was, had ?] not prepared. Mr. Laws told him he knew he was, and he must speak. Mr. Laws fussed with him for about quarter an hour and Joe would not give up. And Mr. L. asked what reason he could give, Joe said that there was so much _____ [company ?] he thought he would not speak. Then Rhoda & Miss Church got up to go, but Mr. Laws would not let them. Oh, Fan ! it was a great time I can tell you. I could not help laughing, tho I felt bad for both of them. Mr. L. told him he should report him to the ___ [Trustees ?]. I don't know whether they will turn  him out or not. Alfred could hardly keep from crying.
Herbert and Lot are having a great flirtation, and Lin Burrall and "Seth G.". She has cut Selina out. They practice with the "dramatic" club, and ____ [Ellen or Abbie ?] Sanborn and Em Chaloner & Fred Foster and Abbie Weston. They all go to the "club" and this is the order in which they go away from it. The dramatic give an entertainment a week from Tuesday and your school will be done by that time, and I want you to come over and and make me a visit and be ___ to it. I don't have a great deal of time out of school, but I think you know so many here that you need not be homesick and I will do all I can to make you have a good time.
The entertainment is on the 23d and you will have to come the day before so as to be rested. I hope you will excuse this dull letter for as I told you over there I should tell you all there was to tell. I suppose you perceive that I have not improved much in writing since the time when we could ___ write on the board instead of dangerous examples.
Write soon & ___ me you will come & see me. Yours in haste,
Edna 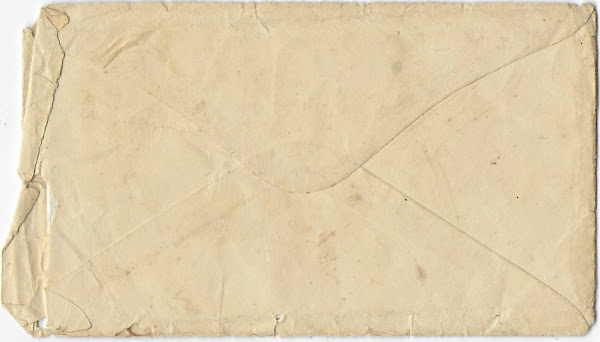 Posted by Pam Beveridge at 9:03 AM