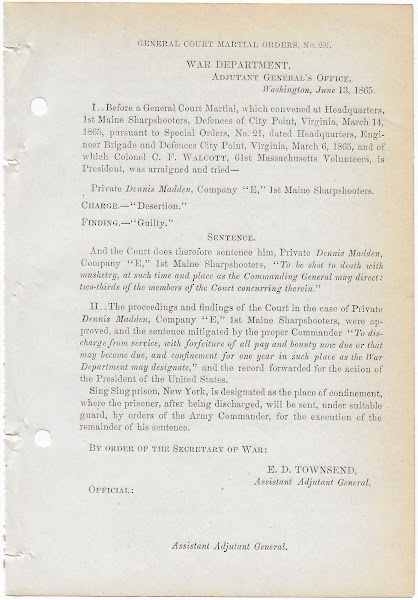 Sentence from an 1865 Court Martial for desertion that reduces the sentence of Dennis Madden of Company E of the 1st Maine Sharpshooters from being shot to death to a term in the prison at Sing Sing, New York.
A transcription appears at the end of this post.
Also mentioned:
If you have a theory as to the identity of Dennis Madden of Company E of the 1st Maine Sharpshooters, please leave a comment for the benefit of other researchers.
Did Dennis go on to have descendants?
Transcription:
General Court Martial Orders, No. 291
WAR DEPARTMENT
ADJUTANT GENERAL'S OFFICE
Washington, June 13, 1865
I.  Before a General Court Martial, which convened at Headquarters 1st Maine Sharpshooters, Defences of City Point, Virginia, March 14, 1865, pursuant to Special Orders, No. 21, dated Headquarters, Engineer Brigade and Defences City Point, Virginia, March 6, 1865, and of which Colonel C. F. WALCOTT, 61st Massachusetts Volunteers, is President, was arraigned and tried -
Private Dennis Madden, Company "E", 1st Maine Sharpshooters.
CHARGE. - "Desertion"
FINDING. - "Guilty"
SENTENCE
And the Court does therefore sentence him, Private Dennis Madden, Company "E", 1st Maine Sharpshooters, "To be shot to death with musketry, at such time and place as the Commanding General may direct: two-thirds of the members of the Court concurring therein."
II.  The proceedings and findings of the Court in the case of Private Dennis Madden, Company "E", 1st Maine Sharpshooters, were approved, and the sentence mitigated by the proper Commander "to discharge from service, with forfeiture of all pay and bounty now due or that may become due, and confinement for one year in such place as the war Department may designate," and the record forwarded for the action of the President of the United States.
Sing Sing prison, New York, is designated as the place of confinement, where the prisoner, after being discharged, will be sent, under suitable guard, by orders of the Army Commander, for the execution of the remainder of his sentence.
BY ORDER OF THE SECRETARY OF WAR:
E. E. TOWNSEND, Assistant Adjutant General
OFFICIAL:
Assistant Adjutant General
Posted by Pam Beveridge at 10:44 AM